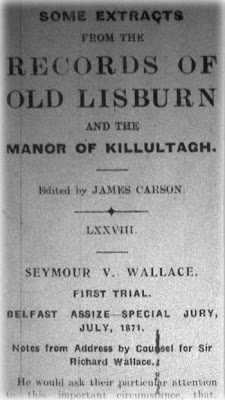 Notes from Address by Counsel for Sir Richard Wallace.

He would ask their particular attention to this important circumstance, that, whatever the result of the litigation may be -- whether, as he confidently hoped, Mr. Wallace will succeed in establishing his title to those estates, or that the defendant, Sir Hamilton Seymour, will be the successful litigant -- whatever be the result, the estates will be no longer the Hertford estates. They are separated from the marquisate of Hertford, from which, by the death of the late marquis, they have been detached.

In the year 1790 the marquisate of Hertford and earldom of Yarmouth were granted to the then Earl of Hertford, who thereby became the first marquis in 1793. He was succeeded in 1794 by his eldest son. He had a large family, seven sons and six daughters; and in '94 the eldest son became the marquis, the second after the creation of the peerage in that family. The second marquis was married twice. By the first wife he had no issue, but he married secondly Isabella Anne, the daughter of Viscount Irwin, of Scotland, and by that union he had an only son, Francis Charles Ingram Seymour Conway, who was the third Marquis.

Now, the third marquis, married a foreign lady, Madlle. Faniani, and she was the daughter of a dancer, and they might well suppose that the marriage was not very pleasing to the other branches collateral of the Seymour family. She gave birth to four children; one, a daughter, was born before the marriage, and possibly that circumstance may have led to what undoubtedly did take place -- that she was not received into the Seymour family as the wife of the head of the family, which, if differently selected, would probably have been otherwise. The daughter of the dancer of whom he spoke had three sons, the eldest Richard Seymour Conway, and he was the fourth marquis, and was the late Marquis of Hertford, the last of the line, who died. He was, in other words, the eldest legitimate son of Maria Faniani, the dancer's daughter, afterwards Marchioness of Hertford. Her second son was Lord Henry Seymour. This Mademoiselle Faniani does not appear to have lived with her other sons, or to have cared much for cultivating the acquaintance of the family who had turned their backs upon her, and so she lived in Paris almost continually. Her son, the late marquis, then Earl of Yarmouth, also went to Paris to reside at a very early age, and, in fact, spent the greater part of his time away from this country, and was not in any sense a resident in Great Britain. He was devotedly attached to his mother; whether it was that the affection which existed in his breast by reason of their being slighted by other members of the family he would not say, but whatever was the cause -- whether it was the maternal love for his mother, or the sympathy he felt for her slighted condition -- he regarded her with feelings of the sincerest love. He evidently was not well pleased at the manner in which she was treated by the other members of the family, and, as if he wished to soften the aspersion and sustain her under the affliction which she must have experienced at he contemplation of her loneliness, he remained always by her side, attending to and comforting her. This being the condition of affairs, the Marchioness of Hertford and the Marquis of Hertford both resided in Paris; and he would now, at this stage, call their attention to the connection of the plaintiff with these distinguished parties.

The plaintiff, Mr. Wallace, was born in England about the year 1819. He was the son of Mrs. Agnes Jackson, a Scotch lady, her maiden same being Wallace, and the earliest reminiscence of the plaintiff is this circumstance, that he was brought, when a child, from England to Paris, where his mother at that time resided, and was paying a visit to Lord Hertford. On being brought over to Paris he was introduced, or he might say more correctly of one of his tender years, he was shown to Lord Hertford. Eventually, after the lapse of a few months, he was one day taken into the carriage of the Marchioness of Hertford, the mother of the then Earl of Yarmouth, and from that day up to the time of the death of the Marquis of Hertford in 1870 Mr. Richard Wallace, boy, youth, and man, never left Lord Hertford. He was educated as a child, he was educated as a youth, under the direction of the late marquis; and as he advanced towards man's estate he was given an allowance of a very handsome sum, £1,000 a year. He received considerable presents from time to time, and he might illustrate the liberality with which he was treated by mentioning that when he grew a little older, and commenced amusing himself by speculating on the Bourse, they find Lord Hertford paying sums amounting to £27,000, and making an entry in his diary, "Richard paid for his losses in speculating on the Bourse, so much." In every entry made with reference to him, in his diary or any other document, it is evidently in the affectionate terms with which he regarded him, for he names him "Richard," so that there cannot be the least doubt as to the kindly relations that existed between the parties. When first this acquaintance was formed the Marquis and Marchioness of Hertford lived in the Rue Lafitte, in Paris, and we find Mr. Wallace always treated and regarded as a member of the family, dining with them daily, driving in the family carriage, and, in fact, accompanying them as a matter of course wherever they went.  Thus matters continued to progress up to the year 1837, and it was at this date that both properties of the marquis, the English and the Irish, became dissevered. The estates, English and Irish, of the Marquis of Hertford were settled by a deed bearing date the 2nd day of October, 1802.

The result of that was that the second marquis having died in 1822, the third marquis was tenant for life, remainder to the fourth marquis for life, with remainder to his first and other sons in tail. That deed contained a power of revocation, which in events that may occur was exercisable by the second marquis, and was exercisable by the third marquis and his son, then Earl of Yarmouth, afterwards fourth marquis. The deed of 1802 comprised and settled into one, and described the estates both English and Irish, including the family mansions in England. In 1837 the third marquis proposed to his son to revoke the deed as to the Irish estates, and to settle them on the fourth marquis in default of issue. That was done by a deed of revocation and appointment -- the new settlement on the 9th September, 1837.

The Irish estates were settled for life on the third marquis; for life to the fourth marquis, with remainder to his first and other sons as before, but giving him an ultimate revocation in view of any inconvenient limitations -- the English estates remaining settled to go with the title. That deed having been executed on the 9th September, 1837, on the 21st June, 1838, the then Earl of Yarmouth, afterwards fourth marquis, who had acquired the reversion in fee in the Irish estates, made his will in these words:-- "I give and devise all my castles, houses, manors, advowsons, messuages, farms, lands, tenements, titles, hereditaments, and real estates whatsoever in Ireland, of or to which I am now, or shall, or may at my decease, be seized or entitled for any estate or interest in possession, reversion, remainder, or expectancy with their rights, members, and appurtenances to the uses following."

He then gives it to two trustees for a term of 300 years upon trust, and he expressly provides that "if my personal estates shall not be adequate for payment of my just debts, and funeral and testamentary expenses, and of the annuities and pecuniary legacies hereinafter bequeathed, and to be bequeathed by any codicil or codicils in this my will, then in trust to levy and raise, by way of mortgage, of the hereinbefore devised hereditaments and premises, or any part thereof, such a sum of money as will be sufficient to make up such deficiency, as aforesaid, of my personal estate, and to apply the money so to be raised in answering and satisfying the purposes for which I have made the same raisable; provided always, and my will is that, when all and singular, the trusts hereinbefore expressed concerning the said term of 300 years shall have been fully answered and satisfied, or shall have become unnecessary or incapable of taking effect, and when the expenses of the trustee, or trustees, for the time being of the same term shall have been paid, then and thenceforth the same term shall cease and determine, and from and immediately after the expiration or soever determination of the said period of 300 years, and in the meantime subject thereto, and to the trusts thereof, to the use of my brother, the Hon. Henry Seymouth Conway, commonly, called Lord Henry Seymour, and his assigns, during his life, without impeachment of waste (except as to ornamental timber)."

"I give and bequeath the following pecuniary legacies and annuities -- that is to say, to George Capron and William Hughes Brabant, their executors, owners, and assigns, a sum of £30,000 sterling, in trust, to invest the same in or upon some or one of the Parliamentary stocks, or public funds of Great Britain, or upon Government or real securities in England or Wales, but not in Ireland, and in trust to pay unto, or empower Richard Jackson, son of Agnes Jackson, now of the ago of twenty, or thereabouts, and residing at No. 1 Rue Taitbout, in Paris, or his assigns, to receive the interest, dividends, or annual proceeds of the said £30,000, or of such stocks, funds, or securities as aforesaid, during his life; and my will is that (subject to such life interest therein of the said Richard Jackson), my said trustees, their executors, administrators, and assigns shall stand possessed of the same £30,000, and such stocks, funds, and securities as aforesaid, and the interests, dividends, or annual proceeds thereof, ii trust, for all and every the children and child of him, the said Richard Jackson, lawfully to be begotten, and their respective administrators and executors, and as to the same £30,000, and such stocks, funds, and securities as aforesaid, and the interest, dividends, or annual proceeds (subject to the trusts hereinbefore expressed concerning the same), in trust for the said Richard Jackson, his executors, administrators, and assigns, for his and their absolute benefit. I give to Amelia Idle (widow of George Idle, Esq.) an annuity, or clear yearly sum of £12,000 during her life, the said annuity to be paid by equal half-yearly instalments, the first of which shall be made at the end of six calendar months next alter my decease." Counsel then proceeded to observe that the Richard Jackson mentioned in that will is the plaintiff is this action, Mr. Richard Wallace, and about his identity, he believed, no controversy could arise.

I may here observe, for once and for all, that in 1842 Mr. Richard Jackson was rebaptised by a Protestant clergyman in Paris, and took then the name of, and thenceforward was known as Mr. Richard Wallace.


(This article was originally published in the Lisburn Standard on 12 April 1918 as part of a series which ran in that paper each week for several years. The text along with other extracts can be found on my website Eddies Extracts.)

Posted by an extract of reflection at Thursday, April 12, 2012