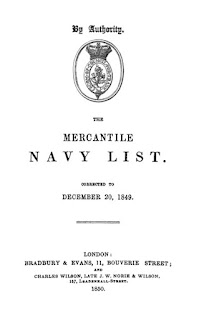 In 1845, in order to bring Great Britan into line with the rest of Europe which required all Masters and Mates to have passed an examination and obtain a certificate of competancy, The Lords of the Committee of the Privy Council for Trade brought in regulations for a voluntary examination.

The Lords of the Admiralty expanded on this and from 23rd of March, 1847, no vessel was able to be taken up as a transport, convict, or freight ship, unless the Master and Mates had obtained the required certificates.

This was further extended to passenger freight ships and others over which the Government, the Honourable East India Company, the Royal West Indian Mail, and the British and North American Mail Companies exercised control.

A Bill was then introduced into Parliament making the condition compulsory for masters and mates who obtained their ratings for the first time after the 1st January, 1851. Masters and mates who had already served in such a capacity also had to possess an authenticated attested certificate of the fact before their vessel could effect a clearance at the Custom House so they would not be required to undergo examination. 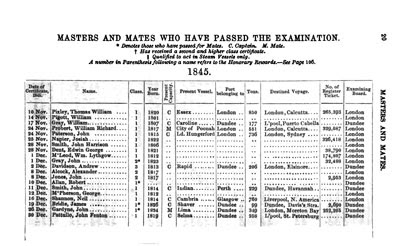 The Mercantile Navy List was established, under the superintendence of the Registrar General of Seamen, to publicise the names of those who possessed certificates and was published half-yearly from 1849. After 1857 it was issued annually until 1976 (with supplements up to the end of 1977), with the exception of 1941 to 1946 during the Second World War. Monthly supplements were issued under various titles from 1886.

Initially being a source of information on masters and mates who had obtained a certificate of competency, the early volumes also included lists of pilots, receivers of wreck, obituaries, and records of awards and testimonials for services at sea, ships signals and various official notices and statistics.

Of particular interest to the family historian the 1849 and 1850 publications gave the year of birth of those examined. 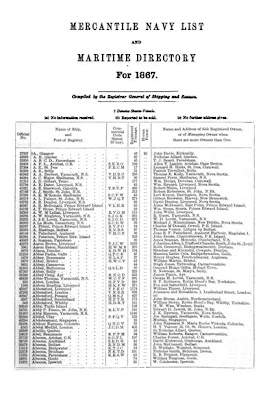 The initial publications also gave a list of registered Steam Vessels. With the passing of the Merchant Shipping Act of 1854 every British registerd ship was to be given an official number to be recorded on the certificate of registry and marked upon her main beam. This register would include name of vessel, port of registry, tonnage, signal letters and name and address of the owner(s). These details where then added to the Mercantile Navy List.

In the mid-1860s the names of Masters and Mates were dropped from the List.

Only a few near-complete sets exist with even the British Library set missing two volumes. The National Maritime Museum has editions which cover the period from 1857 to 1976.

The Mercantile Navy List provides a comprehensive index to ships' official numbers from 1854 to 1976 and provides basic information on each ship, which can be used to trace other records and to compile an outline history of a ship and its owners.

The same numbering system is used for crew lists and certificates held at The National Archives and in other repositories, making the Mercantile Navy List a primary resource for searching maritime records.

Many of the available editions are being digitised and a list of those available can be found at maritimearchives.co.uk

An explanation of how to use the List can be found at PortCities Southampton: How to use the Mercantile Navy List

Posted by an extract of reflection at Sunday, April 15, 2012