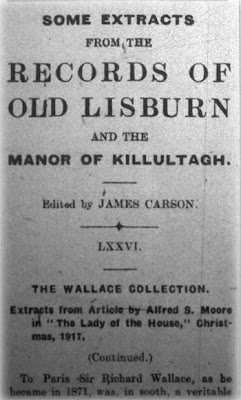 Extracts from Article by
Alfred S. Moore in "The Lady of the House," Christmas, 1917.

To Paris Sir Richard Wallace, as he became in 1871, was, in sooth, a veritable angel. He endowed the Hertford British Hospital, and not alone provided a multitude of ambulances during the Franco-Prussian War, but also donated 100,000 francs for the sufferers by the bombardment. When this large-minded and generous man died in 1890, he left everything to his wife, a French lady, Mlle. Castlenau. One son was born of the union, and though he entered the French army and is long since dead, he made the life of his father miserable. Sir Richard, in one of his sad moods, once remarked that it irked him "to think how people should look upon him as one of the happiest of men, when, in truth, he was one of the most wretched. The sympathy of a good son was his soul's sorrow, for such he never had." That son was so ungrateful as to cast up his father's paternity as his precedent for his wild depravities. As for Lady Wallace, she lived the quietest of lives amid those great treasures in Hertford House, London, seeing only a few intimate friends. Her companion and intimate secretary was

Who was Sir John Murray Scott, Bart.? He also must be included in the romance of the great Wallace Collection, for it was mainly through his advice that it passed into England's keeping. He was the grandson of a distinguished physician, who was a great personal friend of Sir Richard Wallace's. Shortly after the death of the fourth Marquess, Sir Richard happened to say that he was badly in need of a secretary. Mr. Murray asked if his grandson, a young barrister just called, might be suitable. His probation proved his worth, and so he continued first the fides Achates of Sir Richard, and, on his decease, similarly of Lady Wallace. In fact, when Lady Wallace desired to make her will she was anxious to bequeath to him all her whole property in gratitude for the devotion with which he had managed her affairs and cared for her interests. Sir John Scott -- for he was honoured with a baronetcy -- persuaded her that it would be a good thing if she would, at any rate, leave the contents of Hertford House to the nation. Moreover, that for him to inherit the entire fortune there might be some suspicion of undue influence. Lady Wallace took his advice -- and so England acquired the Wallace Collection.

Now, one must give here a tribute to the late Sir John Murray Scott, Bart. It is true he became the heir to a very great fortune, and it may be recalled that only a few years ago (July, 1913) the sequel of a sensational cause celebre was to give Lady Sackville some priceless objets d'art which she claimed she was entitled to from Sir John's estates. However, it must never be forgotten that Sir John Scott might easily have inherited all the valuable Collection -- computed to-day as worth nearly 15 millions sterling -- but his generosity made the sacrifice.

The late Sir John Murray Scott, Bart. -- who died suddenly in the midst of the great Collection itself at Hertford House, Manchester Square, London, on January 17th, 1912 -- continued to show the interest in Lisburn which his friend and employer had begun. On favourable terms the water and market rights, so zealously guarded by the Hertfords, as well as the Courthouse, Assembly Rooms, and Estate Office (the latter now used as the Town Hall) were acquired by Lisburn Urban Council. Some years afterwards Sir John Murray Scott presented the Castle Gardens, a very interesting historical site containing a bowling green and monument to Sir Richard Walace, to the town.

Though it is possible a new generation "which knew not Joseph" may, in time, forget the indebtedness of the British nation to Lisburn for its magnificent contribution to its Art, it may also be mentioned that the town has a host of other memories. Here it was that Louis Crommelin, the father of the great Irish linen industry, lived and laboured. John Nicholson, of Indian fame, called Lisburn his home. Harry Monro, the rebel leader at Ballynahinch, was executed in the Market Square. Jeremy Taylor sojourned in Lisburn and the neighbourhood during probably the most brilliant period of his life. Here for a time resided Lady Morgan; and Lisburn also gave the world the actor Master Betty, "the infant Roscius," whose meteoric career in the beginning of the nineteenth century electrified the annals of British drama.

Sir John Edward Arthur Murray Scott, Bart., was born at Bolougne-sur-Mer in 1847, was the eldest son of Dr. John Scott (his mother being a daughter of George Murray, D.L., of Chichester), and a grandson of Vice-Admiral Sir George Murray, K.C.B., captain of the fleet to Lord Nelson. He was educated at Marlborough College, at Paris, and in Germany, and was called to the Bar in 1869. From 1871 to 1890 he acted as private secretary to Sir Richard Wallace, Bart., MP., and died January 17th, 1912.

Sir Richard Wallace built the Castle House, in Castle Street, Lisburn, in 1880, at a cost of some £20,000. The work was carried out by James Vernon & Son, local contractors. Sir Richard only resided in it for a very short time, a few months in all. Sir John Murray Scott, although he visited Lisburn on several occasions, never resided in the Castle House, the valuable contents of which were removed to London. The Courthouse, Railway Street, was built in 1883 at a cost of about £4,000.

The Castle House was acquired from the Murray Scott trustees by the Lisburn Urban Council in 1914, at a cost of £2,000, free of all encumbrances, for the purpose, of forming a Technical School. The school has proved an unqualified success. The first Committee of Management consisted of Thomas Sinclair (chairman), James Carson (vice-chairman), Harold Barbour, J. B. Campbell, Edward Donaghy, F. Duncan, Robert Griffith, James A. Hanna, Wm. M'Ilroy, W. J. M'Murray. James M'Nally. Principal -- Cecil Webb.

In July, 1913, there came before the courts in London the extraordinary case of Lady Sackville versus D. Malcolm Scott, the residuary legatee under Sir John Murray Scott's will. The defence was that the bequests to Lady Sackville were wrongfully obtained, or in the alternative that the deceased executed a codicil whereby he revoked the bequests to Lady Sackville and gave her greatly reduced benefits. There was a will dated 1900 and five codicils. Lady Sackville's claim was estimated at about £500,000, including cash and valuable art objects, pictures, and plate. Counsel, in opening the case on behalf of the Scott family, disclosed an extraordinary state of affairs. Sir John had evidently fallen entirely under the influence of her Ladyship, a smart and brilliant woman. A few extracts from the opening will be illuminating:--

Sir John wrote Lady Sackville -- "Your love of spending is your second life. You used to say that you could live on £200 a year in a cottage." With the money the lady received from Sir John in his lifetime, said counsel, she could have bought 400 cottages. In another letter one of the Scott family writes -- "I hear the locusts have arrived in Connaught Place." And when Lady Sackville was told while there by one of Sir John's sisters that the servants called her (Lady Sackville) the earthquake, Lady Sackville became very annoyed, and said that Miss Murray Scott, who communicated this information, had insulted her. There was a great disturbance in the house, and the sisters, went away for a time. When they returned later (this being in 1910) they found that Lady Sackville had taken herself bag and baggage to the Ritz Hotel. Sir John then said to his sisters, "I won't subject you to any more Billingsgate. She is mad. Let her stay at the Ritz."

Having obtained a little fleeting liberty, this unfortunate gentleman seemed to have been delighted for a short time at being master in his own house, but later correspondence was resumed, and up to April of 1910 the lady had £38,000. Counsel quoted further letters and conversations, in one of which it was alleged that Sir John spoke of Lady Sackville as a " revengeful devil." In a letter from Lady Sackville to Sir John she said in reference to what had taken place, "I hope you are thoroughly ashamed of your big fat self and are duly remorseful."

Coming to 1911, counsel said there was a letter which marked a rather new phase It showed the extraordinary lengths to which this gentleman was prepared to go in his generosity. Lady Sackville by this time had became more certain of her control over him. As the correspondence proceeded it became apparent that she was satisfied that she could really do with this man exactly what she liked. There were references to a shop which Lady Sackville was interested in for charitable purposes in connection with which she asked for loan of a thousand, and which, blaming her for her unbusinesslike conduct, he said -- "Do you think I have a thousand or more, kicking about doing nothing, naughty girl." Next he wrote -- "My dear old Jose, -- You are a curious creature, deserving of smacking."

He declared that he never could be angry with her, and after a quotation from Meredith finished up by saying he enclosed a cheque for a thousand.

Referring to Lady Sackville's letter to Sir John, counsel described her as a very clever woman, thoroughly familiar with the psychology of this man. She invariably addressed him as "My Dear Seery" or "My Good Seery." She referred on one occasion  to his efforts to keep the picture "The Mill" for the nation, and concluded -- "I hope you will write me a nice, kind letter, and be a good Seery." In March, 1911, Sir John wrote to her that he could not put up with the manner in which she was treating him, adding -- "It would be a terrible thing for you if I were to die suddenly, and you were to find all your hopes shattered." Counsel had no doubt this meant that if the quarrel were persisted in, and he died suddenly, the consequences might be very disagreeable for her. He might alter his will, or had done so.

To further show Lady Sackville's influence, counsel mentioned that in May, 1911, Sir Jobs had consented to lend his sisters two beautiful necklaces to wear at Court. But Lady Sackville disapproved, and the young ladies had to go without the jewels. There was a curious incident on July 10. Major Arbuthnot went to dinner at Connaught Place. Opening the door of the library by mistake, he saw Lady Sackville and her daughter, the former just rising from a writing-table and appearing to shut a drawer. They afterwards both left the house in a hurried and unusual manner. When Sir John was told of this it was obvious he did not know these ladies had been in the house at all, for the perspiration broke out on his brow, and, speaking in French, he claimed, "My God! my God! it is incredible!"


(This article was originally published in the Lisburn Standard on 29 March 1918 as part of a series which ran in that paper each week for several years. The text along with other extracts can be found on my website Eddies Extracts.)