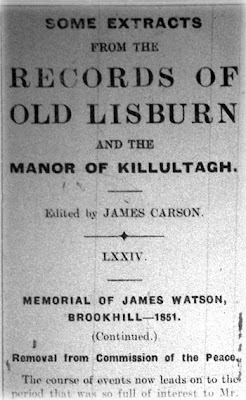 Removal from Commission of the Peace.

The course of events now leads on to the period that was so full of interest to Mr. Watson and the country at large -- viz., the year 1845. Before July of that year the temporary Act prohibiting processions had expired. It was considered by a great number of loyal men that the usual Orange anniversary should be observed, with proper decorum, and the Protestant North.

Accordingly, a procession took place at Lisburn, headed by Mr. Watson. It was understood that he did not fully concur in the determination to walk on the 12th July. However, seeing that such a measure was decided upon, it was his aim to afford his countenance to it by his presence. He considered, besides, that his personal concurrence and it would tend to the promotion of harmony and peace.

Now ensued important matters which long occupied the attention of the whole Empire. On 18th July the Marquis of Clanricarde, in the House of Lords, commenced the series of discussions. He asked the Government -- "What course they intended to pursue with regard to Mr. Watson, a magistrate and deputy-lieutenant of the county of Antrim? It had been thought proper not to renew the Party Processions Act; and on the 23rd of June a meeting was held at Lisburn, attended by three hundred masters of Orange Lodges, and presided over by Mr. Watson -- a most respectable gentleman, and most popular in his neighbourhood, but whose conduct in his public and official capacity must not go unnoticed. Resolutions were passed at that meeting, and signed by him, to organise the Orange Institution in the county, and to meet on one of the July anniversaries, and to march in procession to the parish church. Now, magistrates were dismissed very unceremoniously in 1843 attending Repeal meetings, or subscribing to the Repeal Association. What he wanted to know was, whether the Government, after they had taken upon themselves the responsibility of doing away with the Act, had made any arrangement in its stead -- whether they had taken any steps to rebuke this gentleman from what he had done in reference to these proceedings, and had dismissed him from the commission of the peace?"

In a very short time public suspense was brought to an end. Anxious conjecture give place to painful certainty. It was officially announced that Mr. Watson had been formally, in the first instance, dismissed from the deputy lieutenancy, and, next, superseded in the commission of the peace. The effect of this announcement was singularly striking. Men of all parties united in questioning the propriety of the bold and ungracious step of the government.

A Roman Catholic and Repeal paper, called the "Newry Examiner," contained this language:--

"What was Mr. Watson's crime? He attended an Orange meeting and procession, organised proceedings, and appeared decorated with the insignia of the confederacy. Now, in all this there was nothing illegal. The Government had permitted the Processions Act to expire -- the Lord Lieutenant did not issue even an admonitory letter to discountenance the displays which were announced and expected. Within Mr. Watson's district everything passed off in a most orderly and quiet manner. There was neither offensive language nor violence of any kind employed. Mr. Watson is, therefore, declared unfit to continue a magistrate simply because he thinks fit to exercise a legal and constitutional right in the open day, and without the danger of injury to the peace of the country."

In Belfast and Lisburn especially, and in the adjacent districts, the Ministerial insult to Mr. Watson was the absorbing theme of conversation, and discussion. Where his name had been familiar on the lips of men as a household word, the slight which was mediated and cast upon him was received in silent indignation, or with an unrestrained expression of discontent and profound concern. The utmost length to which, it was conjectured, Government interference could venture, would be an official communication to Mr. Watson conveying a disapproval of what had been done under his sanction, and an expectation that there should be henceforward a conformity to the desires of the Queen's Government. An interference of this description from high quarters would not have been taken as trenching upon the union immunities of an individual or party. But when, instead of this, there was a harsh and summary visitation of the displeasure of the Government, without any word or sign of a cautionary nature, the natural love of fair play, common to all classes of the people, attached itself to the side of Mr. Watson.

In all parts of the United Kingdom the magistracy very keenly felt the indignity which their office suffered in the case of Mr. Watson. Several magistrates of the highest standing saw that their independence was at stake, and therefore at once tendered their resignations of their office.

Besides the significant manifestations of the indignant feeling of many honourable minded members of the magisterial bench, there is to be recorded the strong, united testimony of magistrates and others -- a nearly countless host -- assembled at Lisburn on Thursday, Aug. 21, 1845. It had been resolved that a public opportunity should be afforded the whole community for giving proper expression to their sentiments with regard to Mr. Watson. The day which has been mentioned was fixed upon for this purpose. Certainly the grand result, in the magnificent array upon the occasion, must have even more than surpassed expectations of the most sanguine.

Shortly after one o'clock the immense procession, preceded by music, began to move toward the place of meeting, a suspicious field belonging to David Beatty, Esq., on the other side of the road from the Friends' Schoolhouse on the hill. At the upper end of the field a large platform was erected, filled with the ladies and with the persons who were to take a lead in the proceedings. About one hundred and eighty Orange Lodges were in the field -- from Belfast, Lisburn, Hillhall, Ballinderry, Maralin, Moira, Waringstown, Kilmore, Ballylough, Dromore, Dromara, Hillsborough, Ballinahinch, Newtownards, and various other districts. In addition to these, there was a vast concourse not at all connected with lodges. It was calculated that the number of persons at the meeting was at least fifty thousand.

On Friday, the 22nd August, Mr. Watson received another proof of the estimation in which the society held him. A grand entertainment was given to him in the Assembly Rooms, Lisburn, by nearly two hundred gentlemen. Thomas Johnson Smyth, Esq., J.P., D.L., presided.

In Belfast the Protestant people of all ranks were full of anxiety to express their sentiments in regard to the conduct of the Ministry towards Mr. Watson. Accordingly, on the evening of Thursday, the 4th September, a grand Protestant demonstration was held in the Music Hall in honour of the late victim of expediency politics.

A vast number of affectionate and complimentary addresses were presented to Mr. Watson. All parts of the kingdom appeared anxious in this manner to join in the universal tribute of approval and admiration of his principles. In many cases deputations waited personally upon him the Brookhill.

The Government, after not more than fifteen months had elapsed from the date of their hot and hasty displeasure, despatched to Brookhill overtures of reconciliation. An official tender, dated 2nd September, 1846, was authoritatively made to Mr. Watson of restoration to the high offices of which he had been so unceremoniously deprived. The offer was not accepted. It was courteously declined, but in such terms as showed a decision that was unalterable.

About midsummer in 1850 he was seized with the affection which ultimately resulted in death. It was understood by the multitude of anxious inquirers that he was not afflicted with any positive disease -- that he laboured chiefly under prostration of strength from the decay and breaking up of his physical system. But he lingered for a considerable time under the attack, hope began to be entertained by the community that he might yet rally. However, at length he sank. After an almost miraculous continuance of his life -- without food or nourishment for a great number of days -- he peacefully breathed his last on Tuesday, the 3rd of September, 1850.

Monday, the 9th of September, was fixed upon for the interment. In the "News–Letter" of September 10 a graphic narrative was published descriptive of the funeral pageant:––

"Yesterday all that was mortal of the late venerable and universally esteemed proprietor of Brookhill was deposited in its last resting place -- a vault in the Magheragall Churchyard. From an early hour in the morning the entire country for miles around the residence exhibited the tokens of preparation for the approach solemnity... From the mansion to the church the road was densely crowded with people -- to such an extent, indeed, that it was a considerable time before the procession could reach its destination. The whole scene was impressive to the last degree... At the church the crush was oppressive, but there was no interruption to the sacred harmony of the procedure. The churchyard was previously filled by groups of men and women, most respectively attired; and therein was prepared for the body a vault, adjoining that which is tenanted by the remains of Mr. Watson's grandfather. At the vestibule the body was received by the Rev. Mr. Courtenay and the Rev. Roberts Mussen. It was then brought inside the church, and after the beautiful and impressive service was concluded, it was carried to the vault in which it was deposited. It was nearly four o'clock in the afternoon before the ceremony was completed, after which the vast assemblage, numbering from 10,000 to 20,000 persons, retired to their homes."

At the patriarchal age of nearly eighty-eight years, Mr. Watson descended to the grave. His remains are laid side-by-side with those of his grandfather -- the ancient worthy inhabitant of Brookhill. Whatever monument may be raised to his memory from the devotion of public and attached adherents, there can be no doubt that his best memorial exists in the ardent and affectionate remembrance of those "troops of friends." As a man Mr. Watson was universally beloved. In the varied duties of his public and professional life he had no rival.


"His life was gentle, and the elements
So mixed in him, that nature might stand up
And say to all the word -- this was a man."


(Next Week: The Wallace Collection.)


(This article was originally published in the Lisburn Standard on 15 March 1918 as part of a series which ran in that paper each week for several years. The text along with other extracts can be found on my website Eddies Extracts.)