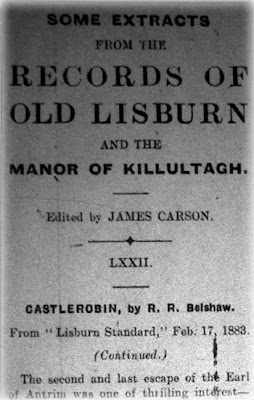 The second and last escape of the Earl of Antrim was one of thrilling interest -- a sort of miniature of the Royal fugitive. For the better security of the prisoner he was said to have been placed in charge of a "very godly officer" named Wallace, with whom was associated another called Gordon, who, it seems, though not so "truly Christian," was more obliging to the Earl in the way of planning his escape. He brought him the rope with which he let himself down the castle walls, where there was a servant ready to meet him. Both being well mounted, and having avoided the sentries, they made their way safely on to Glenarm Castle, where they remained a while. The alarm, however, was soon given, and they betook themselves once more to the beautiful glen, which was densely wooded. Being closely pursued by the Scotch troopers, the Earl changed clothes with his servant, who then rode on so as to attract their attention. In this way the Earl managed to escape once more, while the servant was taken back, to Carrickfergus, where he was hanged for his fidelity.

After wandering over the mountains for some time, in the month of October, without knowing where he was going, the Earl found himself early one morning under old Castlerobin. An account of this adventure has been written by an old soldier of Sir Hugh Clotworthy's regiment. We can well imagine the arrival of the Earl on the ancient road which winds past Castlerobin, over which the judges of assize were in the habit of travelling, bridle in hand, between Armagh, Carrickfergus, and Antrim, and which was equally well known to the famous outlaw, Redmond O'Hanlon. The grey dawn of the morning had just risen on the hills, and the mists of the mountain were rapidly passing away. The silence of night had given place to the song of the lark, the measured whistling of plover, and the distant lowing of cattle, whose mingled sounds came floating over the purple heather. In this condition of external nature, and on a crisp autumnal morning, the Earl was still wandering along, with the panorama of the ever-beautiful valley of the Lagan opening out before him, when he suddenly found himself beneath Castlerobin. The first person he met was a little withered old man, called in Irish a "scolloge," whose duties had called him forth at that early hour. The tongue of the Gael being common to both, they soon became fast friends, and the scolloge led him to a secret place where be might rest in safety; he then left him there while he went down to Lisnagarvey to buy some bread and beef. The Earl, having refreshed himself by this timely meal, was led to a hollow tree in the wood, where he slept until the following night, when his faithful friend returned and guided him safely to Charlemont, from whence he made his way to a relative who lived at Mellafont, in Meath.

The Earl was not ungrateful to his humble friend on the White mountain, but always made much of him, and gave him an ample pension for life. The officer (Captain Gordon) who connived at the Earl's escape left the garrison about the same time as his friend, and having made love to the Earl's sister Rose, they were married immediately after with the full consent of her noble brother. The captain got another company under the Earl of Leven, and returned to Scotland with his Irish bride, and the best wishes of all the Clandonnell.

In the vicinity of Castlerobin are the well-known Plover Plains, where in later times the Union Regiment of Volunteers, whose headquarters were at Lisburn, held some of their reviews. In after years all the yeomanry companies of the district -- infantry and cavalry, including Brookhill, Magheragall, Lisburn, &c. -- had a grand review there, which lasted two days, under Mr. Watson's command.

The following list of names, without any reference to their present social position, will be found to include nearly all the original English families who came to Lisburn and the adjoining parishes in the 17th century. The bearers of them were mostly in Lord Conway's regiment and Rawdon's troop of horse, which served through the rebellion of 1641, and the Commonwealth, down to the Restoration. Sir Phelim O'Neill made their acquaintance once at Lisnagarvey, and met with a very warm reception. General Monroe, before he left his wig at Benburb, also paid them a visit while they were on duty at Glenavy. The "Irisshe Enemie," perhaps invited by some dwellers in the lake district, shortly after advanced to within a mile of the latter village, but they soon retired, like the King of France's men, who first marched up the hill -- and then came down again.

Lord Conway, writes on a Monday, in November, 1663, to his "dear brother," Major Rawdon, then in Dublin, stating that "he had raised the country that night to keep watch on all the ways through Killultagh into the County Antrim to arrest some conspirators who had been concerned in a plot to seize the Lord Lieutenant, and that he was afraid they might escape on the morrow, which was the market day." He also complains of the the duty as being "too much for one man."

In a quarter of  century later we find that brave old stock the life and soul of a little army of 4,000 men who had rallied at Lisburn after the unfortunate Break of Dromore. This latter event was not so remarkable after all, when we consider the unarmed state of the multitude which had then been so hastily drawn together. Under the leadership of their old favourite, Sir Arthur Rawdon, who was then the only person excluded from mercy in one of Tyrconnell's proclamations, they retired to Coleraine. On arriving there, they were sent on duty to Moneymore. While thus engaged, Sir Arthur sank under the exposure to which he was subject, and was obliged to withdraw from all further active service. His regiment then moved on to Derry, where their next colonel was the gallant Gov. Baker. With him they gave material assistance during the well-known siege, and having helped to free their country from Home Rule, so called, brass money, and wooden shoes, the moat of them returned to their desolated homes, which were soon restored again by the industry of a free people, and others went off to the tune of "Lillibullero" to see King William safe over the water.

These all having fought a good fight, and another century having passed away, we find them again represented by their worthy grandsons in a published list of voters (in the writer's possession) who did their duty at the general election of 1790, when the old elements of rebellion were again coming to the front. Our Scottish friends, the "Macs," also appear numerously on this election roll -- such as M'Allister, M'Beth, M'Call, M'Cay, M'Clelland, M'Cluskey, M'Clean, M'Clure, M'Connell, M'Cullough, M'Cullom, M'Gill, M'Kee, M'Kinstry, M'Kenzie, M'Neight, M'Nab, M'Fadden, M'Waters, &c. As they do not, however, come under the list of the old Conway Settlers, we have only given a few of them. They are all now in very good company, and we do not expect to hear of their making any mistakes in the marking of their ballots at the next election.

With reference to the old stock of whom this article is written, and who spread themselves over from Lambeg to Glenavy, the selection has been made chiefly to illustrate the nomenclature of the times. The founders of these names have long since passed away, and the remains of many of them, for seven generations, have been sleeping in the dust which surrounds the Cathedral of Lisburn, that is itself the monument of their existence. Some of these ancient and Christian names are still borne by the grandsons of those who voted in 1790. As their enemies alleged they came in with the sword in one hand and the Bible in the other, we shall therefore take the liberty of giving them a Scriptural introduction to the reader.


(This article was originally published in the Lisburn Standard on 1 March 1918 as part of a series which ran in that paper each week for several years. The text along with other extracts can be found on my website Eddies Extracts.)