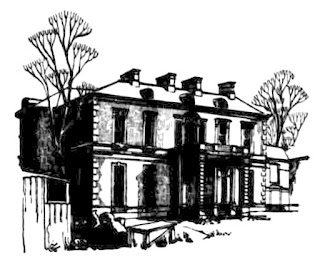 The demesne has gone and mansion is lost

BELFAST, like all great cities, has crept ever outward, urbanising the surrounding pastureland, using stream and river for its own purpose, until now one must seek for those landmarks that were outstanding features little more than a century past.

When, in 1823, Atkinson described Orangefield, the seat of Hugh Crawford, a proprietor of the Belfast Bank, he said that this estate was “a more extensive feature of the Belfast neighbourhood than any of those on the Downpatrick road.”

Then, the handsome square house stood on a richly planted demesne of 200 acres, and a corn and flour mill added greatly to the wealth of the owner and to the welfare of the tenants.

The trees in the demesne were for the most part oak and ash, either fully grown or “far advanced to maturity,” some of them planted no doubt by Thomas Bateson who left Lancashire in the 17th century and came to Orangefield.

The uniformly laid surface of the land was in those days considered a defect, but the extensive views of the Belfast mountains, the hills of Castlereagh and the church of Knock and Breda compensated for this fault.

The fault became a virtue later when the level land was covered with neat and pleasant houses. To-day the extensive demesne is so intersected by parks and avenues that it is difficult to find the “excellent mansion” of which Atkinson wrote.

The mansion, though in good repair, is no longer the spruce dwelling house that it was, and the oak and the ash have long since gone. Only here and there are to be seen the stumps of the great trees beside a sturdy remnant of the wall which once enclosed the demesne.

For a long time Orangefield was deserted and then a group of enterprising businessmen saw its possibilities. It is now the headquarters for several manufacturing concerns. The windows are stacked high with boxed goods and all day vans come and go in the driveway.

Here in this place that once saw a most leisurely manner of living, workpeople are busy preparing and canning food-stuffs, and, since Orangefield House is in the centre of a most populous neighbourhood, it is never difficult to find extra hands. Even the old stables and coach-houses have been re-built and utilised, and a modern, hygienic canning plant has been installed where once the horses rested.