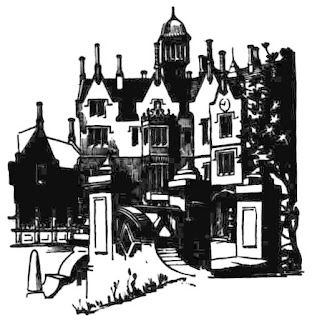 LURGAN has grown very much since Captain Pynnar made his survey of property in Co. Armagh in 1618, and noted that William Brownlow had made “a very fair town consisting of 42 houses, all of which are inhabited with English families, and the streets all paved clean through.”

Much of William Brownlow's “very fair house of stone and brick” that lay adjacent to the town can be seen to-day, and the rebuilding which has taken place through the intervening centuries has been carried out so skilfully that there is a lively harmony about the whole dwelling.

Here there is no formalism to produce an “architectural composition.” Windows appear where they are needed to supply light, as the native common sense of those first Elizabethans dictated — a common sense shared both by the Victorians and our own contemporary Elizabethans.

Ornamental chimneys, both real and decorative, sprout from every peak of the many-gabled roof, giving the whole building an air of exuberance and gaiety. This exuberant air is increased by the delicate scrolled stonework that abounds about the dwelling.

Looking at this stonework one can almost believe that the fabled petrifying powers of Lough Neagh have been bequeathed to the ornamental lake that fronts the house, and that some past occupant has proved the waters magic quality by immersing lace to decorate his dwelling.

Succeeding members of the Brownlow family remained patrons of Lurgan throughout the years that followed Pynnar’s Survey.

As early at 1824 the beautiful demesne was thrown open to the public. Even then, the people of Lurgan were free to walk round the fine lake and watch the water-fowl cleave triangular furrows through the reeds, whilst the gulls whirled and swooped and screamed overhead.

Brownlow House was bought by the Orange Body in 1903 and is now an Orange Hall. The beautiful demesne, with its rich plantations and fine sheet of water is a public park.

Bicycles and motor-cars break the stillness of the misty lake, but the water-fowl still sail among the rushes.

Next Week — Moira Village, County Down.