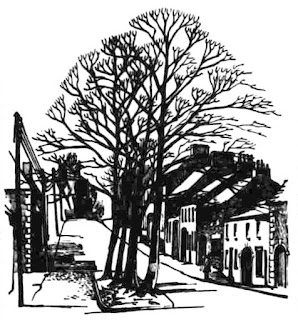 There is a story locked up in every home

FOR this, the last of this series of articles, I have chosen to write not of one house, but of all those houses that together make up the charming Georgian village of Moira.

Moira is a roadside village, the houses being built on either side of the highway, and its charm and interest are evident to the traveller from the moment that he sees the fine trees growing in the centre of the wide street.

The houses are mostly of rubble masonry, some thatched, some colour-washed a pleasing rose-pink, some with wide arched doorways and graceful fanlights.

It is a peaceful place, this typical Ulster village through which runs the main Lisburn-Lurgan road. Set in an open-flourishing landscape of green fields from whence come some of the means to feed the thriving towns of Britain. Moira has changed very little since Sir George Rawdon acquired an estate there at the end of the 17th century.

The road on which this village is built is excellent, for thereabouts is a tradition of good roads. Even in 1683 the roads for which Sir George was responsible, were described as “verv good, not only from the nature of the soil which generally affords gravel, but from Sir George Rawdon's care.”

Indeed, so excellent a road-maker was this gentleman that he has been described as “the best highwayman in the kingdom.”

Each of the homes of Moira has a story, as yet unwritten, known only to those who live therein.

Every old house has a story if we care to search for it. I have found, during the months in which I have been writing about these homes of Ulster, that this search is well worth making. It may lead in some tale of high romance, to some old deed of courage, or to some story of fortunes founded from small beginnings.

There remain many old Ulster homes whose stories have not been written – great houses, Georgian farms, ancient castles and secluded country houses handed to succeeding generations of the same family.

Of those that I have seen and admired I remember best the serenity of Florencecourt, the green peace of the Southwell almshouses, the glowing rose of Waring House, and the distant grace of Mount Panther, but, above all, I recall with gratitude the kindness of those who own the storied homes of Ulster, and without whose help these tales could not have been written.