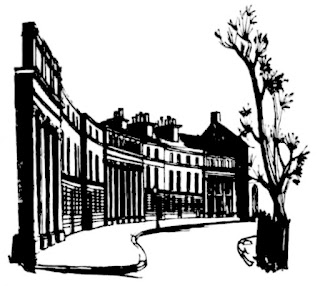 Conceived on lines of Georgian graciousness

WALKING along University Road, with public and private transport perpetually roaring past and crowds of workers, shoppers and University students hurrying on their way, it seems scarcely possible that little more than a hundred years have lapsed since a certain section of the public complained that Queen's had been built too far out in the country.

There is a map of 1848 that shows Queen's and Corry’s Crescent surrounded by open fields, and from this map one can get a clear mental picture of the beautiful square that Robert Carry visualised.

Only the Upper and Lower Crescents of the square he planned were completed, and those who built here later lacked his ideals of beauty.

The Upper Crescent, with its graceful sweeping curve and fine proportions, was completed first, somewhere about 1848, and from the Belfast Directory of 1852 we learn that four new houses in the Lower Crescent were then finished and occupied.

The dignified houses that make up these fine terraces were planned during the middle years of Victoria's reign, when pomposity rampaged in English architecture

Fortunately, Georgian graciousness lingered in Belfast, and here, in Corry’s Crescent is none of the Neo-Gothic influence that characterised new buildings in England at this time, when the spread of education and increased wealth from expanding manufacturing power had given a varied and solid culture to a new middle class.

The terrace where Robert Corry spent much of his life was doubtless the culmination of all he had dreamt during the weary months that followed the accident in which be fractured both his legs.

Looking through the Belfast directories for the years between the Great Exhibition and the Prince Consort's death, one gets a picture of Belfast life in the Crescents. For obvious reasons the Crescents were favoured places of residence for the professors from Queen's. Merchants and manufacturers who wished to live in rural surroundings yet needed to be within easy reach of the city found the neighbourhood a happy choice.

The directory of 1856 tells us that the fortunate occupant of No. 9, Lower Crescent, was a “gentleman.” One wonders if he found the Ladies Seminary run by his next-door-neighbour Miss Black, too noisy for his name had disappeared by 1860.

Merchants, manufacturers, lawyer, parsons, professors, and increasingly, Corry's timber merchants and shipowners, inhabited the terraces, so that, to-day as in the map of 1848, we refer to this place as “Corry's Crescent,” not Upper and Lower Crescent as the directories and nameplates indicate.