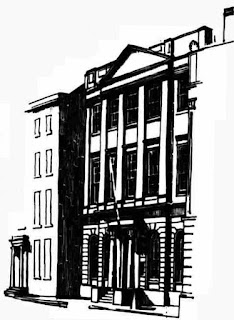 A glance back to the time when Belfast’s museum was founded.

ONE of the objects of the Belfast Reading Society, established in 1788, was the formation of “collections of nature and art."

The Reading Society, now known as the Linenhall Library, flourished, but little was done about the “collections of nature and art" until, in 1821, eight young citizens formed themselves into the Belfast Natural History Society.

The first meeting was held on May 5, 1821, at the house of Dr. Drummond, one of the founder members, in Chichester Street. The newly-formed Society continued to meet in Chichester Street until Dr. Drummond's lease expired, when the natural philosophy classroom at the Belfast Academical Institution was offered to them as a temporary headquarters.

Membership and interest in the new Society grew, their headquarters were again changed, and at length it became obvious that they must seek a permanent home, both for the ever-increasing “collections of nature and art," and for their frequent meetings.

Eventually the founder members secured a part of Thos. M'Cammon's land in College Square, tenders were sent out by the architects, Messrs, Duff & Jackson, and on May 4, 1830, the Marquis of Donegall laid the foundation stone of the Belfast Museum.

The old Museum is to-day the headquarters for various societies, and the original collections have been removed to the Municipal Museum in Stranmills Road.

The classical proportions of the old building retain their dignity, although overshadowed by the more opulent Technical College.

This was the first provincial museum to be built in Ireland, and for 80 years it served the public well. At first the museum was open only on specific days, but in 1837 it was decided to open six days a week.

Charges ordinarily were 3d for mechanics and children, and 8d for other persons, but on Easter Monday, which was the great day for visiting the Museum, the charge was 1d for children and 2d for adults.

A hundred years ago the majority of Belfast citizens had only about six days holiday a year — two days for July 12, two days for Christmas and two days for Easter. The great thing to do at Easter was to go, first to the Botanic Gardens to watch the balloon go up, and then to the Museum, where strange, wonderful and rare things were to be seen.

The Easter advertisements which told Belfast citizens of the wonders on show at the old Museum were very different from the bulletins which now tell us what we may learn in the new building which has inherited the original “collections of nature and art."