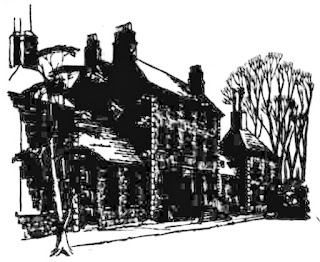 Baffled pikemen and the painted beauty

SOMETIME between 1749 and 1790, prior to big marriage. Francis Price had a house built in the heart of his rolling Saintfield parkland. The trees that he and his successors planted are old giants now, fringing the winding drive that leads to the house, and casting long shadows as the wintry sun momentarily turns the last dried leaves to a glowing amber.

Against the walls of the house the Virginia creeper still flaunts a few flushed flags, but on the climbing rose only dusters of brilliant berried remain of all the summer's glory.

Originally, the house consisted of a three-storey centre block, but later, flanking wings, two floors high, were added, and these were joined to the main edifice by single storey connecting blocks. This variation in height adds to the interest of the exterior of the house.

Within the dwelling aere many mementos of the Price ancestors. Still preserved is a magnificent blue velvet coat, with companion satin waistcoat lavishly embroidered in blue and silver, that Francis Price wore on special occasions. There is also a curious contraption used by Nicholas Price, son of Francis, to enable him to take exercise when, after his eightieth birthday, he was too old for riding horse-back.

Nicholas Price was probably the best-known of this old family. Mrs. Delaney met him when he was a small boy, and she wrote of him: "Poor little Nickey Price, I’m afraid there is no hope for him."

In spite of the doubts of the Dean's wife Nicholas Price lived to be 96, and it is said that he attributed his life and health to the waters of Ballynahinch Spa. He came to be known as "The Old Squire."

During the '98 rising, the Old Squire had a most fortunate escape. Whilst he was away in Dublin a band of rebels marched on Saintfield House and lined up a cannon on the lawn, preparatory to blasting the place.

The steward, who had been left in charge ran out to say that his master was away, whereupon the rebels held their fire and chased the steward indoors. The unfortunate man id in a passage that runs round the basement, whilst the cut-throats sought him throughout the house.

In the search, a pike was thrust through a portrait of a lady, presumably to discover if the unlucky wretch had hidden behind it. The scar left by this pike-thurst mars the lady's painted beauty even yet.

Eventually the unhappy man was discovered, taken to the lawn in front of the house, and shot.

For several weeks the rebel gang had possession of Saintfield House, but were eventually overcome, after the Battle of Ballynahinch.