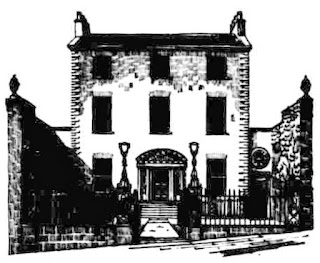 ARMAGH has so many beautiful examples of Georgian architecture, both in the city itself and in the surrounding countryside, that it is difficult to select the most outstanding.

Remarkable for its simplicity of form is the Beak of Ireland. The building is set back a little way from the road, and its elegance is admirably enhanced by beautiful wrought iron work, a tribute to the skill of local craftsmen.

The serenity of the plain white front is offset by the richness of a charmingly curved handrail, and the delicate tracery of the lamp standards that flank the gate.

The house, completed about 1812, is attributed to the architect Francis Johnson. It was built for Leonard Dobbin, M.P. for the borough of Armagh. The lovely ceiling in the main reception room, where public business is now transacted, incorporates amongst its flowing arabesques, the Dobbin coat of arms.

At first, Leonard Dobbin carried out banking business in his new residence in a private capacity, but on January 1, 1827, he and his nephew Thomas became joint agents in Armagh lor the Bank of Ireland. Leonard Dobbin retained his seat in Parliament, and whilst he was at Westminster the business of banking was in his nephews complete charge.

Some difficulty about his political activities arose in 1834, and he resigned his seat in Parliament. He wrote to the Directors of the Bank of Ireland that he regarded the office of agent as a "position of honour and dignity."

Mr. Dobbin and his nephew continued as agents after this slight altercation, but they appear to have been retained mainly on account of their influential standing, for a manager was now appointed to undertake the more intricate part of the business,

Mr. Leonard Dubbin made one further effort to dabble in politics in 1841 when he carried out a whirlwind campaign on behalf of a certain Mr. Rawden. Upon the complaint of Mr. Rawden's opponent, Mr. George Fox, the Directors of the Bank intimated that Mr. Dobbin's political activities embarrassed them and thereafter these activities ceased, and the agent devoted himself entirely to banking.

Among the records still preserved at the bank are a lodgment docket dated 4th September, 1834, and an account book, filled with beautiful, faded copperplate, which dates from 1830.

It is said that St. Patrick had his first church in the tiny garden at the back of this Georgian house, long before Armagh became a city, and that later his sister founded a religious house in the same place.

Whatever the truth of this legend, it is certain that the garden was once a burying ground, since human remains have been discovered there within living memory.