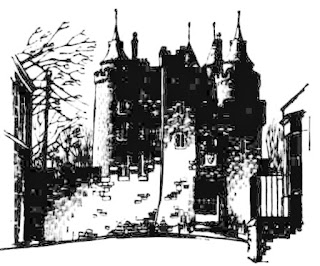 The storms of centuries have left it unshaken.

BEYOND the little harbour and the straggling factories of Killyleagh's narrow main street, one is surprised to find the curtain wall of a great grey castle dominating the town‘s tiny square.

To those who visit this busy town for the first time, the sight of the Castle, overpowering the huddled houses, comes as something of a shock, for gatehouse and town are in close proximity, not separated by vast parklands as is the more usual case.

These battlemented walls were built to ensure security for the inhabitants of the humbler dwellings that cluster round their base. Their strength and grandeur are portrayed in Raven's map of 1625. an excellent reproduction of which appears in Stevenson's "Two Centuries of Life in Down."

The fabric of Killyleagh has been excellently preserved, since for centuries it has been used as a home. The Earl of Abercorn, writing to his Master, James I, said that James Hamilton was building "a very strong castell, the lyk not in the north." These words could well be used to-day for nowhere is there a castle of such age in a like state of repair.

At the time when Lord Abercorn wrote to his King, James Hamilton was really making additions to a stronghold built by the Normans, probably some 400 years previously.

Hamilton, that shrewd Scots adventurer, had bought the Duffryn territory, which included Killyleagh, from the Whyte family about 1610. He reported to his monarch that the territory had been purchased for "a good valuable consideration."

The purchase of the territory did not, however, include the goodwill of the Whyte family, for we learn from Hamilton's later complaints that one Christopher Whyte had joined himself with Constantine O'Neale in rebellion against the new landlord. As later events disclosed that James Hamilton's "good valuable consideration" was a mere £40, the dissatisfaction of the Whyte family is not surprising.

The ill-fated Henry, Earl of Clanbrassil, Hamilton’s successor, restored Killyleagh in 1666. The castle was the scene of much disturbance when the rising of 1798 shocked the North with its bitterness. For a third time, in 1850, the Castle was restored on this occasion under the direction of Sir Charles Lanyon.

Some nine years later, the gatehouse section was rebuilt by the Marquis of Dufferin and Ava, as a gift for Lady Dufferin's brother, Mr. Gavin Hamilton. The annual rental is one of the most romantic in the Province, the tenant having the right to offer "a red rose to the Lady, or a pair of gilt spurs to the Master of Clandeboye."