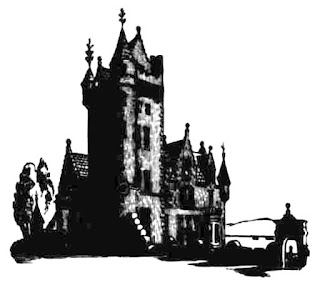 From far below on the Antrim Road, Belfast Castle seems suspended halfway between the emerald gloom of the demesne's banked fir trees and the craggy top of Cave Hill, capped on a gold October day, with pearly sea-cloud.

The summer visitors are gone, and buses no longer run on the climbing road that leads to the Castle and its grounds, but just now, in the fall of the year, it is most rewarding to make the escent on foot.

A wide, grassy pathway winds round the hillside, fringing the edge of the demesne. Sunlight glints on woods that glow with all of autumn's richness, and in the sparkling air the tawny leaves are flecked with copper flame. Here and there, against the land's glossy green, the scarlet berries of the rowan trees hang jewel-like, and the tall plumes of the firs stir in the gentle wind.

It is only now, when summer’s profusion has passed, that we see the beauty of each separate leaf in the amber lace that clothes the branches.

The grey stone of the Castle, too, is warmed by the October sun, and the noonday brilliance dapples each pepper-pot turret with light. One thinks of Brunhilde and the Castles of the Rhine as one looks at the tall tower and pointed turrets of this place.

There is something of a fairy-tale quality in the curving stone staircase that leads to the first-floor reception rooms, and in the superb view of the Lough that one gains from the lawn fronting the dwelling. On a sunny autumn day, the sky’s deep blue is reflected in the sapphire waters of the Lough, which glisten like crystal as they are furrowed by harbour-bound vessels.

From this height, the city itself takes on a faery atmosphere as grey veils of smoke drift over it, making high gantries and upreaching chimneys rise, unsubstantially, from cloudy foundations.

This romantic building is little more than a hundred years old, its Scottish baronial style being typical of the Victorian era. Castle and grounds alike were bequeathed to the City by the Earl of Shaftesbury in 1934. The gift is characteristic of this noble family, which, in many ways, has been concerned in public service since the early 16th century.

The philanthropy of the seventh Earl is well-known. It is this hero of Victorian times, believing so passionately that life should be service to God, that we must thank for the humane reforms that came about during the second half of the 19th century. Lord Shaftesbury was the instigator of many of the Bills that reformed the Imperial Parliament, of the Mines Act that forbade the employment of women and boys underground, and of the Act that at last cured the evil of using child labour to sweep chimneys.

To the first Earl of Shaftesbury we owe our present system of Justice. He was the statesman who carried the Habeas Corpus Art through both Houses of Parliament, and who later introduced a Bill to render Judges independent of the Crown.

Next week – Bank of Ireland, Armagh.

Posted by an extract of reflection at Sunday, March 21, 2021