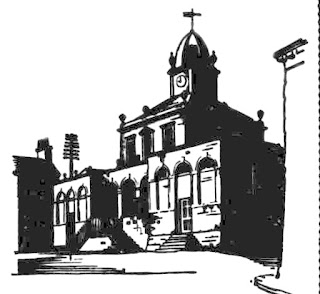 Architectural grace in a Plantation town.

THE Courthouse at Hillsborough is a fine example of rural Irish Renaissance architecture, one of the many excellent public buildings that abound in the towns of Ulster. The building stands in an open space at the lop of the main street, between Government House and the old Fort.

The square centre of the Courthouse is flanked by two long wings, the space between their ends forming arcaded entrances which at one side face Government House and at the other the old Fort. These flanking wings are decorated with a “blinded" continuation of the central arcading, in a manner consistent with the Georgians’ obsession for symmetry.

Here are held the Courts of the Chairmen of the County or Quarter Sessions, which correspond to the English County Court Their origin, however, is of a much earlier date than their English counterpart. They were founded in 1794 in the reign of George III.

At Hillsborough, Quarter Sessions are held twice a year, and the Land Courts then taking place try all cases of dispute between landlord and tenant. Petty Sessions are held monthly and have jurisdiction over minor cases.

Hillsborough Courthouse was erected at the expense of the third Marquis of Downshire. Succeeding to his father's great estates at the age of 14, spoiled and flattered in a manner worthy of a reigning prince. Lord Downshire might have been excused had he succumbed to the profligacy of the age. That he did not reflects great credit upon the singular character of his mother, a woman who proved herself thoroughly capable of caring for the greet Downshire estate during her son's minority. Upon attaining his majority Lord Downshire interested himself in all that concerned the welfare of townsfolk and tenants.

The three years that followed his coming of age were years of high prices and great poverty, and he determined to improve the position of his tenants and the agricultural methods on his estates.

He it was who introduced ploughing matches to Ulster, the first of these being held at Hillsborough Park. In those days ploughs were mostly wooden. Lord Downshlre imported an iron plough from Glasgow, proved its superiority, then offered one of these ploughs and two sets of harness to the farmer in each townland who produced the finest crop of grain, flax, or potatoes.

For his time Lord Downshire had an unusual belief in the importance of education. He had studied the writings of that great educationist, Joseph Lancaster, who was introduced to him in Belfast. He was anxious that Lancaster should visit the schools he had built on his estate, but unfortunately the educationist had engagement in America which prevented him from so doing.

The Courthouse, school, market house end other public buildings erected by the Third Marquis form, at Hillsborough, one of the beet examples of a Plantation town.

Next week: Bank of Ireland, Armagh.

Posted by an extract of reflection at Sunday, March 21, 2021