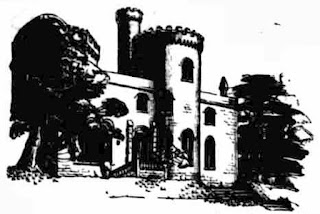 THE BEES in busy in the blackberry blossom that grows in the hedges in the lane to Killymoon. The air is heavy with the scent of the honeysuckle, and the song of the birds has a midsummer lethargy. Beyond the emerald of the golf course, the lane drops steeply to run through bushy woods, and, green and deep leans through the cool trees.

One suspects that here, on Midsummer's Eve, the Little People play, and it would be no surprise to see Puck’s face peering at one from behind a holly bush, or to catch a glimpse of Titania's mothy frock. The path ends abruptly at the ponderous portico of the fairy tale castle that Nash designed for Colonel William Stewart in 1807.

Killymoon was Nash's first important work in Ireland, and it led to quite an important Irish connection. Indeed, in the very next year, the architect designed Lissan Rectory for the Rev. John Staples, a connection by marriage of Colonel Stewart.

Like the Staples, the Stewart family had owned land in the Cookstown district since Elizabethan days, and this castle has all the dignity of a baronial hall. It is a castle to delight a child – a truly picture book place, straight from the pages of Grimm or Hans Andersen. The dwelling is a mixture of Norman, Early English and pure inventive Nash, part of that fancy dress ball of architecture that characterised the early years of the nineteenth century.

The interior of the castle promotes still further the faery atmosphere. The eight-sided drawing room is long and lofty, lit by tall arched windows which are surmounted by a great, gilded pole, Each arched corner of the octagon is mirror-lined and reflects a thousand facets of dancing light. The walls still wear the original wallpaper that has the sheen of moire silk. Great double doors of polished oak lead to a spacious hall, and similar doors open on to an oval dining room, whose restrained plasterwork and marble fireplace show the dignity of their Georgian origin.

It is in the hall that one begins to feel that Nash invoked elfin help in the building of this place. The wrought iron staircase rises, in delicate arabesques, from a marble floor to a vaulted ceiling that is like the chef d'oeuvre of some goblin pastry cook. The fragile plasterwork, like the sugar spires of an inverted wedding cake, ends in gilded drops, like the frozen tears of some miniscule Midas.

Colonel Stewart was 27 when this castle was built, I wonder did he bring Titania herself to be his bride? Alas, if he did. her dowry must have been fairy gold.

Fortunes and families fall, and this fabulous fairy dwelling which cost £80,000 to build in 1807, was sold about thirty years ago, for just a hundred pounds.

Now the gracious terraces are overgrown, no lilies float on the lily pond, and the very rooms have a utilitarian purpose. Over that cool and gracious dining room the bees are busy; do they ever carry a message to Titania? Does she still come, on Midsummer's Eve, to dance on a moonbeam and see herself in every gilded arch? Perhaps the bees know, but they tell their secrets only to a chosen few, and I, alas, am not one of the chosen.

Next week – The Old Cross, Newtownards.

Posted by an extract of reflection at Monday, September 28, 2020