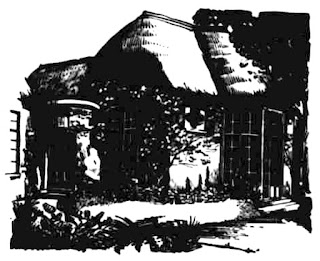 
ALTHOUGH built at a time of great classical influence Derrymore House, Co. Armagh, remains obstinately Irish, showing none of the Attic style. It is a quaint, one-storied dwelling built of granite although this is discovered only where the warm amber plaster has been chipped away.

The thick, gnarled stems of wistaria, planted long ago, have crept up the walls and embedded themselves in the shabby thatch that sits upon the house like a beloved and battered hat. A red rose brushes gently against the panes of the long, Georgian windows — the same windows through which Chancellor Corry and Lord Castlereagh might have been seen as they thrashed out the details of the 1801 Act of Union.

Derrymore means "great oak," these lands were probably at one time part of the primeval forest. It seems that for centuries there has been a house at Derrymore, for there are records that a Henry M'Shane O'Neill was living hereabouts very early in the 17th century as life tenant of the lands of Camlough.

The present house was built by Sir Isaac Corry, Chancellor of the Exchequer in the last Irish Parliament before the Act of Union. The story of the origination of the Act in this very house, of the special Dublin road made for Chancellor Corry, and of the Chancellor's duel with Grattan are too well known to be repeated here.

The dwelling is built round three sides of a square, the room known as the Chancellor's room, being at one time the entrance. As the Corrys became more powerful a more imposing entrance, complete with pillared portico, was made at the opposite end.

About the middle of the 19th century Derrymore passed into the hands of James Richardson, a member of the Society of Friends who had built a model village round a factory at nearby Bessbrook. Mr. Richardson believed wholeheartedly in total abstinence, and had built his model village to demonstrate his theory that when strong drink is absent there is need for no great force of police, and that there is as little use for the pawnshop and the moneylender as for the publican.

It is interesting to note that another great Quaker, Mr. Cadbury, visited Bessbrook before building his own model village of Bourneville.

To-day Derrymore House has been given to the National Trust and much work is being done to restore it to its original beauty. Workmen are busy in a patient re-building of the places that time’s fell hand has decayed. A new thatch of Norfolk reeds is to replace Derrymore’s present battered hat. When all is ready, this historic house will be open to view, complete with the furniture of the period. — Fina.