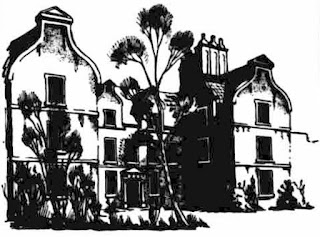 
Richhill lies off the Portadown to Armagh road. Pleasant Georgian houses form three sides of a square at the top of a hill, and Richhill Castle faces them.

The castle proclaims its age; two wings project from each side of the entrance in the Jacobean manner, their Dutch gables echoed by smaller gables in the central part of the house. Inside, there is a richness of black oak. From the fine wide hall a splendid staircase rises, broad enough to allow the sweeping skirts of the ladies of the 17th century to pass uncrushed.

The seven-foot thick walls could unfold many tales could they but speak; they might even tell the truth about the passage reputed to run from the cellars to the Inn. How many confidences must have been whispered in the deep windows!

The demesne at one time enclosed part of the primeval forest. About 1610 the area was known as Muldory, and Francis Sacheverell of Leicester was granted an undertaking there.

He is known to have resided in the Manor House in 1618. Sacheverell’s daughter married a gentleman by the name of Richardson, and he It was who built the castle and gave it the name of Richhill.

The castle has associations with King William. There is still to be seen "King William's stump," the remains of a giant beech to which the warrior King is said to have tethered his horse whilst he slept, when on his way to the Battle of the Boyne.

Dolly Munroe, famed Dublin beauty, graced this place with her loveliness after her marriage to one of the Richardsons in 1775. Goldsmith referred to Dolly's beauty in his poem, "The Haunch of Venison." He wrote:
“Of the neck and breast I had to dispose.
“Twas a neck and breast to rival Munroe's.”

Before her marriage Dolly had been courted by the Viceroy of Ireland Lord Townsend. So anxious was he to secure her that he sent his coach, complete with six running footmen, to call at her house three times each week.

Another of the lady's admirers was the Provost of Trinity. When he died he left her all his prints, saying that they would grace her boudoir far more successfully than they had graced his library. The lady's portrait hangs in the Irish National Gallery. Should her ghost return, she would find her old home sadly altered. Only one wing is inhabited, and the beautiful wrought iron gates have disappeared. They stand, a testimony to the craftsmanship of a bygone age, at the Governor's residence in Hillsborough.