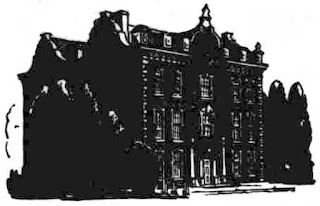 
CARRICK BLACKER reveals itself from a distance by the characteristic clump of dark cypresses which usually surround a large country house in Ulster. Concealed from the road, it lies between Banbridge and Portadown. The house is approached by a long and graceful avenue of trees, its Flemish bond brickwork standing rich against the darkness of the cypresses.

There is sadness and a feeling of mortality about Carrick Blacker. The little whispering airs have crept about the place, nibbling away, here a little of the brickwork and crumbling there some of the stonework, so that only a shabby shadow of splendour now remains.

The heavy iron-studded door with its great black knocker and handle is as strong as it was in the days of William and Mary; nobility there is still in the fine gables, and the elegance of well-proportioned windows, but the finials from the gables and parapet are lying on the lawn, and the gracious garden is quite overgrown.

Built in 1692, the house was the seat of the Blackers, who claim descent from Blacair, King of the Danes, and founder of Dublin in the tenth century.

It seems strangely apt that Col. Blacker should at one time have had in his possession two ancient weapons, found in a nearby bog, attributed to the Danes who fought in a battle hereabouts in 941.

These are not the only relics of the past, for the house once contained the saddlecloth and gauntlet used by King William at the Battle of the Boyne.

The walls of Carrick Blacker would stand forever, but the roof is sadly dilapidated. It was almost a relief to turn from the decaying house to the neat and well-kept farm buildings which stand beside it. An enormous and ferocious bull glared from a pen opposite the kitchen quarters of the mansion. Gleaming white tiles lined the dairy walls, contrasting strangely with the mouldering parapets.

Houses like Carrick Blacker are woven into the very fabric of Ulster's history, unequalled examples of their period and style, and everywhere they are falling into decay.


Since brass, nor stone, not earth nor boundless sea,
But sad mortality o'er-sways their power
Flout with this rage shall beauty hold a plea,
Whose action is no stronger than a flower?
O how shall summer's honey breath hold out
Against the wreckful siege of battering days,
When rocks impregnable are not so stout,
Nor gates of steel so strong, but Time decays?

O fearful meditation! where, alack,
Shall Time's best jewel from Time's chest lie hid?
Or what strong hand can hold his swift foot back,
Or who his spoil of beauty can forbid?
O, none, unless this miracle have might,
That in black ink my love may still shine bright.

Posted by an extract of reflection at Tuesday, June 02, 2020