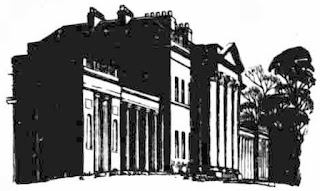 
IN 1656 John Corry, a Belfast merchant, purchased Castlecoole from Henry Gilbert. For “eight hundred and sixtie pounds sterling" he bought the "castle, toune and lands" of Castlecoole. The deed set forth that there were:— ‘One Castle. one capitall messuage, 200 messuages, 200 cottages, two water mills, one Done (dower house), 200 gardens, three orchards, 600 acres of land, 300 acres of meadow, 800 acres of pasture, 500 acres of wood, 500 acres of furze and heath, 600 acres of moor, 500 acres of turbary and 600 acres of mariss, with the appurtenances.”

John Corry restored the dwelling, but in the lifetime of his son, Capt. James Corry, it was burned. In 1689 Governor Hamilton ordered its destruction as being an outpost that was in danger of falling into enemy hands.

Captain James Corry was singularly unfortunate. He had raised a force to fight for the Protestant cause, but for complicated reasons the townspeople of Enniskillen turned against him and he went to England.

His son John served King William and Queen Mary both in Ireland and in Flanders and eventually Captain James was able to prove his fidelity to the Crown and to obtain some compensation for the losses he had sustained. He built a Queen Anne house to replace the devastated dwelling.

Armar Lowry-Corry, great, great grandson of the original John was created Baron Belmore in 1781, Lord Belmore, taking advantage of an alteration to the public road to Dublin, was able to add greatly to the demesne. The new public road ran along the foot of a hill in Goregonnell townland known as Standing-stone, and about this hill a pleasant tale is told.

An enormous stone, two or three tons in weight, stands on the highest part of the hill, and tradition has it that a giant, wanting to stride from the Cuilagh Mountains to Toppid Mountain used the rock as a stepping stone.

The first Lord Belmore commissioned James Wyatt to design the present Castle. He purchased his own materials, the Portland stone being carried to Ireland in the brig “Martha," chartered for the purpose. It was landed at Ballyshannon, carted by oxen to Lough Erne, conveyed to Enniskillen by lighter, and finally carted to Castlecoole.

When we contemplate this regal place, almost mathematical in its Grecian precision, it seems miraculous that all those difficulties were overcome. Gleaming in the sun this princely house is in a most princely setting, the severity of its Attic grace softened by the greenness of the surrounding landscape.

As the building was acquired by the National Trust in 1951. It is possible for the public to visit the main rooms. The treasures are so numerous that only a few can be mentioned. Much of the furniture was designed by James Wyatt, and made on the premises. The piasterwork throughout is wondrous in its grace and formal delicacy, The saloon and drawing room have a distinctly French air, being rich with gilt and brocade.

Delicate Aubusson carpels cover the floors in dining and drawing rooms, and many exquisite pieces of rare Dresden and Sevres china are displayed.

The wonderfully wrought staircase ascends to a lobby, serving the first floor bedrooms. On one side of this lobby is the Bow Room, now a museum, in which Wyatt’s original drawings are to be found. On the other side is the State bedroom, prepared for George IV when he visited Ireland in 1821 to open Kingston Harbour. The monarch never slept in this room, but it remains just as it was prepared for him. The red flock paper is still on the walls, the Spode china rests on mantlepiece and dressing table and three steps lead up to the fabulous gold and crimson canopied bed.

Posted by an extract of reflection at Tuesday, June 23, 2020