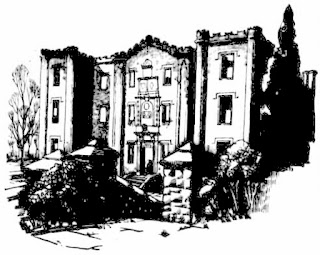 
IN 1605, two years after the death of the first Elizabeth, a bawn was built where the ruins of Antrim Castle now stand. The castle itself was begun in 1610, and Hugh Clotworthy completed it in 1613. During the reign of the second Charles additions were made by the first Viscount Massereene.

Only the death mask of that gracious place now stands gaunt and stark against the sky. This facade, though windowless, is almost perfect, particularly when the castle is viewed from the terraced gardens. The interior is a complete ruin, destroyed by a disastrous fire In the early 1920s. The hall which once contained the Speaker's chair of the Irish House of Commons is now quite overgrown with ivy.

As I walked along the terrace by the river I saw two pigeons flying above the roofless shell to perch on the single chimney pot incongruously standing on one of the remaining walls. Two mermaids, gazing into a mirror, comb their hair above the door that faces the river, and a similar pair decorate the lintel of the main doorway.

Carved above the preening mermaids is the stone biography or the castle. The arms and portraits are in such good order, that the likeness of Charles I. placed there by the first Viscount Massereene, is still recognisable.

In great contrast to the ruined castle are the beautifully trim grounds. Terraced gardens rise on what were once the bastions, and mellow red brick, ornamented with graceful urns, form* a wall for an inner garden beyond.

Many legends attach themselves to this historic place. One concerns a certain Lady Marian, living at the time of the building of the bawn. Whilst walking one day she was attacked by a wolf and fainted in fright. She recovered to find a wolf-hound, badly wounded, licking her hands and face, and the wolf lying dead nearby. The hound was taken to the castle and treated as a pet, but disappeared without trace after a little time.

Many years later, after the present castle was built, it is said that during a battle a stone hound appeared suddenly on one of the towers, so frightening the attackers that the rising was quelled.

The stone effigy which thus averted disaster did not disappear in the mysterious fashion of its flesh and blood counterpart, for within living memory it was to be seen within the precincts of the castle.