The following is the first of a series of articles which appeared in the Belfast Telegraph in 1953 under the pen name 'Fina'. 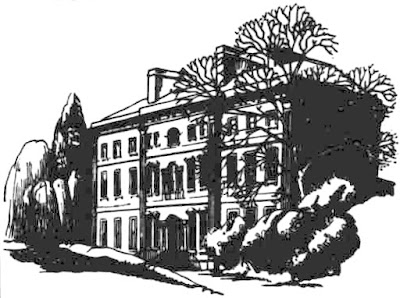 
Here and there in the Ulster countryside are fine old Manor houses, castles and other buildings full of architectural and historic interest at which the passer-by today has scanty knowledge.

This is the first of a weekly series of articles and sketches outlining the features and recalling the stories of some of these structures.

It deals with Mount Panther, a landmark on the road to Newcastle between Clough and Dundrum. Next week’s subject will be Antrim Castle.


SOME time at the beginning of the Golden Age of Architecture, at the approach to the Mournes, Mount Panther was built. The actual date of erection is unknown, but it was prior to 1740, for at that date it was the residence of the Rector, Dr. Matthews. Drive along the one main street of Clough, go down the hill towards Dundrum and you will see the house in all its mannered grace. Heroically sited on a little hill in wooded parkland, it commands a panoramic view of the Down scene.

Looking at Mount Panther's symmetry it if easy to people park and lanes with the shadowy figures of ladies in flowered and panniered skirts and men in elegant waist-coats and breeches, for the grace of the early eighteenth century lies in every one of its 365 windows.

Amongst those who once visited Mount Panther was the renowned Mrs. Delany, friend of Swift and Dr. Johnson, considered by the latter to be “the highest-bred woman in the world and the woman of fashion of all ages." Her husband was Dr. Delany, Dean of Down and friend of Dr. Matthews

Extracts from her famous diaries tell us of the social life of Mount Panther and its environs. We build up such a picture of Dr. Delany and his wife riding from Mount Panther in 1751, and meeting upon the road Mrs. Annesley and Lady Anne Annesley when they were going “on horseback, to dine under a tent on cold meat, about a mile from that place where they are to build."

Even so do we learn of the beginnings of Castlewellan. What delicious images are conjured by those entries which tell of picnics to Ardglass, carrying paper and pencils, “for taking views," and walks to Wood Island, Mrs. Delany carrying her shepherdess's crook and Dr. Delany a stout cane to enable them to penetrate to the thickest part of the wood.

To-day the young oak under whose shade Mrs. Delany once sat is a spreading giant. The park has lost much of its former glory since many of the great trees have been laid low. A close inspection of the house itself reveals a declining elegance. The high walls and graceful wrought Iron gates still stand, but now, in the place that once stabled fifty horses are two high-powered American cars, and the stable clock is stopped at five past five. — (FINA.)