The Young Citizens in the Trenches 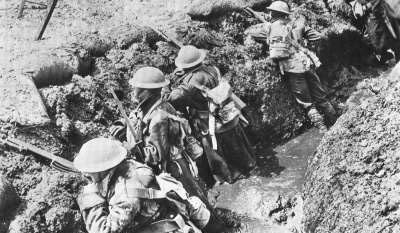 
In a letter home a private in the 14th (Service) Battalion Royal Irish Rifles gives the following graphic description of life in the trenches:—

It is a long time since I started to write a letter under such extraordinary conditions, and I don't know when it will reach you, or how it will look when it arrives. I am writing it from a dug-out in the reserve line, with a sandbag full of mud for a writing desk, with mud as my inspiration, and mud-caked hands directing a muddy pencil. We came up here a couple of days ago, and I have not had a moment for writing; indeed, in the last seventy-two hours I have I only managed to get about nine hours' sleep, but what men have done men can do. The trenches are in a desperate state of mud slime and water in consequence of the recent snows, thaws, and rain, in many places reaching up to the waist. And so we have to wear trench boots, which cover the whole leg, though, unfortunately, a great number of them are not watertight. The front line trench is much worse still, and our progress thither on a working party at night was most exciting.

We walked in single file, the leading man passing back word as regards boards, sump holes, stones, and other obstacles and so a running fire of conversation was kept up which must have been, and, indeed, often was, very amusing. A sample — "Keep to centre of board," "Hole in centre," "Mind rocks," "Sump hole on right," "Up a little," "Two steps down," "Very slippery here," "Mind the mud," "Keep out of the water," &c. I myself found it a much safer way to sample the information passed down, and so when I received word of a sump hole, I generally succeeded in falling into it, to the edification of those behind. Once so deep was the river of muddy water it reached right above the boot, and washed the contents of my trouser pocket. However, the best part, from a spectacular point of view, was the thick sticky mud, about two and a half to three feet deep. You put one leg in, then heaved and shoved, and got the other one out, and so progressed. If there was a slight halt assistance in the shape of a spade had to be called upon. One poor fellow stuck altogether, and so stopped all those behind him, a circumstance which brought quite a number of suggestions, such as ropes, more spades, fatigue parties, &c. Another fellow had to leave his boots stuck in the mud, and mount the parapet in stocking soles while we dug out his boots for him.

Our journey that night took us over three hours, and as we hod only five hours altogether for working, and going there and back, the work done was the minimum. The further we went the deeper the mud become, and really the sight of it inspired me with a great longing to make mud pies. There was thick stuff suitable for cakes, slightly thinner resembling soda bread dough; then, of course the beautiful "batter" mud, and the more universal pancake species; and then, lastly, the liquid mud, mainly water. But, really, I believe I could write a book on the subject of mud, its advantages and disadvantages, its effect on warfare, its effects on foods; or we could advertise it as mud the great substitute for butter, dripping, jam, cheese, and soup. I am sure you will think this lengthy dissertation on mud very inconsistent with my principles; but, after all, "local colour" is the thing in description. Our dug-out rather baffles description, as it resembles a tunnel, a sewer pipe, and a large flue. The roof is convex, and is made of castiron, like the inside of the funnel of a large steamship. The floor is of mud, to which every entrant contributes something. It is reached by a narrow trench of the first species of mud, with a kind of watershoot at the end, with three steps down to the dug-out level. Here we eat, drink, sleep, reed, write, and talk.

The trenches about here are all called by well-known names, and there are Pompadour, Essex Street, Broadway, The White City, The Crater, and numerous others, intended, I suppose, to make the trenches a home from home. Oh, the irony! Home, sweet home, and mud, sweet mud! However, we manage to enjoy ourselves fairly well, though at times certainly the language is by no means patriotic and parliamentary. When one is sent on four separate occasions for a two-hour walk through mud to clear two feet of water from a trench by means of shovels, one thinks and says volumes about the intelligence of one's superiors, but generally humour takes over the situation and we enjoy it.

During the day we see and hear several shells bursting, and the rattle of the machine guns in now like music in our ears. On sentry go this morning at stand-to, when the rival forces were venting their spite in shells and bullets, a couple of larks began to sing their beautiful morning song as they rose higher and higher towards the heaven, seemingly oblivious of the deafening clashes on all sides. To them it mattered not that men were set on one another's destruction, and that they were wasting money and material in their diabolical instruments, and their very indifference did not pay a high compliment to the super-intelligence of man.

A Dinner — And a Good One Too.

I have just had dinner, and a really good one too, with plenty of vegetables in it, one of the best I have had since I joined. There's nothing bucks you up like your grub. After a very restless night usually we make use of our privilege of grousing, and you bet we are some grousers once we start, but the arrival of breakfast always brightens everybody up, and we think how much worse we might be if had no dug-out to go to, no brazier to warm our feet, and a hot part of the line. The real danger here is the state of the trench, for when one stands for hours up to the knees in water, without being able to move either way, "nuff said." One fellow in the firing line in another company had to do twenty-one hours duty on end, and collapsed completely, while another fellow fell into the mud, rifle and all, and had to be carried away suffering from sleeping sickness. Perhaps the "Chocolate Soldiers," as we are called, have shown themselves now to be more than mere parade swanks, and to be able to do their bit as well as any other battalion in the division.