The Comrade in White 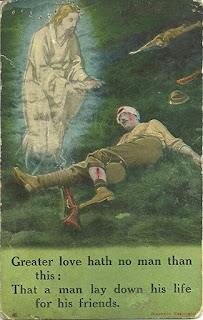 A touching story is passing round
That a figure in white was seen
By our soldiers in the battlefield,
Who assert is was not a dream.

They gave the name of "Comrade in White,"
And told how He bent quite low
Over the suffering and dying men,
Who were wounded by the foe.

We think He tenderly watched them;
He would whisper in their ear
Words of wonderful blessing and comfort
Which then they would gladly hear.

He would tell how He, too, had suffered
Through life to the very end –
"Greater love hath no man than this
That he lay down his life for his friend." 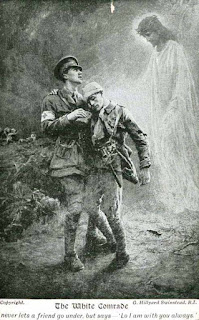 Better than mother or father,
Better than all beside,
Was the presence of the "Comrade in White"
Ere the suffering soldier died.

The soldiers believe that "Comrade in White"
Was our tender, loving Lord,
Who came to minister comfort
And give peace by His precious word.

The dying soldier would rest
On the work that Christ had done,
And would gladly finish the battle of life,
And could say that victory was won.

The mourners for their loved ones
Should believe that all is right
With their dear ones who were ministered to
By the loving "Comrade in White."

This thought should be a solace,
And act like Gilead's balm
To heal the broken-hearted
And bring perfect peace and calm.

Posted by an extract of reflection at Saturday, March 26, 2016