The Young Citizens at the Front 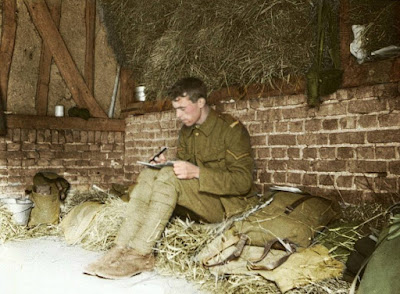 "I am afraid I must have given you a desperate picture of our march and of my condition, but I must have been in rotten form when I wrote it, so that will account for it. I am by no means a 'poor old son,' I am rather a fortunate one, as I am neither dead, wounded, gassed, sick, bereaved, or indeed in any unfortunate circumstances. 'Tis true, today was one of the roughest days we have yet had. To begin with, we changed billets again, and shifted some kilometres further up the line. We found ourselves in a clean, large barn, very cold and draughty, but with plenty of room. When the lights had been put out we heard the other occupants of the barn, and judging from the sounds they far outnumbered our platoon. I had left a couple of biscuits on the ledge above our bed and I heard these crackling, and so I flung my cap at them, but only I succeeded in crumbling some biscuit over my bed. Then at another corner the fellows were having quite a dispute with some rats as to the right of possession, and by the light of a flash-lamp we saw several huge brown rats darting for their holes. When they had sought temporary refuge in their holes they ostrich-like, thought they, unseeing, were unseen, with the result that one of the animals lost his tail. After this casualty they paid another visit to our bed, and in their struggles for eatables one of them dropped on my partner's head. With a yell he jumped up and looked for a light to see if the intruder was still there, but in the words of the psalm, "He passed, yea, was not, him I sought, but found he could not be." This rather unnerved my bed-mate, who said he would face a German a dozen times rather than a rat, and his slumbers were very disturbed that night. Fortunately, I seem to be of a rather indifferent disposition, and so I simply put a blanket well up over my head, and the region of activity and consciousness knew me no more.

"This morning it was bitterly cold, and we had to get up at 6 a.m. to proceed to our navvying again. It was ugh-h-h-h when we got up, and the ground outside was like glass. We had a march of about four kilos, to our job, and the snow began before we got there. We started work, but in the increasing storm of snow very little work was done, more especially as the breakfast we had before leaving was a misnomer. The tea had evidently been made from the drippings of a sewer, and its taste amply justified this opinion formed from its smell. A piece of bread and marmalade completed the regal repast, which was to last us till 2 p.m. However, a visit to the canteen made up in some degree for this breakfast, and three cups of tea, two pieces of cake, three packets of biscuits, and some chocolate filled up a few of the gaps in my anatomy. By this time the snow had turned into a regular blizzard, and all work was suspended, so we had to march back again. The march back in the teeth of the blizzard was desperate, and several fellows were bleeding in various parts of their face ere we sighted our village. The snow froze on our eyebrows and hair, and our very breath froze on the capes, so it was quite a unique crowd which landed in the village. We carried between us several bags of coal collected where we had been working, the whole way back. When we reached our billets we found that blankets, rucksacks, and all our belongings were covered with some inches of snow, which had come in through the various holes in the roof and walls.

"It was a crude homecoming, but flitting being simplicity itself in the Army we simply moved our billets, and are now in canvas huts, which are at least rain and snow proof, and which are at any rate no colder than the barn billets. We expect to be in the trenches early next week, so I hope the weather will change and be a little more reasonable, or there will be cases galore of trench foot and frost-bitten feet. However, what man hath done man can do, so we hope to do our best to keep up the reputation of the division and of the battalion to which we belong."

From The Witness, 10th March 1916.
Image: A self portrait of Lance Corporal George Hackney colourised by John McCormick.

Posted by an extract of reflection at Thursday, March 10, 2016