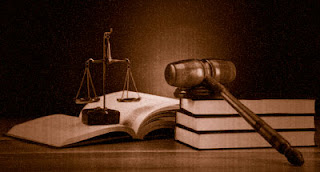 Our readers are all familiar with Sir Walter Scott's "Heart of Mid Lothian," and will recollect the truly touching scene where Jeanie Deans cannot and will not utter what she knows to be false, to save the life of a sister whom she loves as her own soul. It is one of the most masterly of the descriptions of the great "magician of the north," and if a single individual can read it without having every sympathy of his heart aroused, he must be dull if not dead to the finer sensibilities of the soul. But at the same time, we think the "Stolen Sheep," which appeared in the annual for last year called "Friendship's Offering," not unworthy of being placed side by side with the scene in the "Heart of Mid Lothian." There is not an Irishman, at least, who will not feel a strong desire to give the preference to this story, of which we here present an abstract.

Michaul Carroll was a poor and honest peasant, whose family were visited with famine and typhus fever at a time when the wide-spread misery of the country rendered assistance from the neighbours nearly hopeless. His wife and a young child died — he himself was attacked by the disease, and on recovering, his weak state and sallow look totally prevented even the possibility of him getting employment. His old father and infant son are starving at home, in their wretched cabin — Michaul, desperate, and broken down, steals a sheep, which he kills, and conceals in an out house. It was discovered — Michaul was arrested — and his poor old father was taken as a witness against his son!

The assizes soon came on. Michaul was arraigned; and, during his plea of "not guilty," his father appeared, unseen by him, in the gaoler's custody, at the back of the dock, or rather in an inner dock. The trial excited a keen and painful interest in the court, the bar, the jury-box, and the crowd of spectators. It was universally known that a son had stolen a sheep, partly to feed a starving father; and that out of the mouth of that father it was now sought to condemn him. "What will the old man do?" was the general question which ran through the assembly; and while few of the lower orders could contemplate the possibility of his swearing to the truth, many of their betters scarce hesitated to make for him a case of actual necessity to swear falsely. 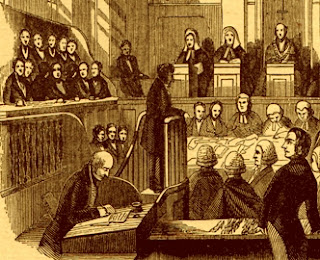 The trial began. The first witness, the herdsman, proved the loss of the sheep, and the finding the dismembered carcass in the old barn. The policemen and steward followed to the same effect, and the latter added the allusions which he had heard the father make to the son, upon the morning of the arrest of the latter. The steward went down from the table, There was a pause, and complete silence, which the attorney for the prosecution broke by saying to the crier, deliberately, "Call Peery Carroll."

"Here, sir," immediately answered Peery, as the gaoler led him by a side-door, out of the back dock to the table. The prisoner started round; but the new witness against him had passed for an instant into the crowd.

The next instant, old Peery was seen ascending the table, assisted by the gaoler, and by many other commiserating hands, near him. Every glance was fixed on his face. The barristers looked wistfully up from their seats round the table; the judge put a glass to his eye, and seemed to study his features attentively. Among the audience, there ran a low but expressive murmur of pity and interest.

Though much emaciated by confinement, anguish, and suspense, Peery's cheeks had a flush, and his weak blue eyes glittered. The half-gaping expression of his parched and haggard lips was miserable to see. And yet, he did not tremble much, nor appear so confounded as upon the day of his visit to the magistrate.

The moment he stood upright on the table he turned himself fully to the judge, without a glance towards the dock.

"Sit down, sit down, poor man," said the judge,

"Thanks to you, my lord, I will," answered Peery, "only, first, I'd ax you to let me kneel, for a little start;" and he accordingly did kneel, and after bowing his head, and forming the sign of the cross on his forehead, he looked up and said — "My Judge in heaven above, 'tis you I pray to keep me in my duty, afore my earthly judge, this day; — amen:" — and then repeating the sign of the cross, he seated himself.

The examination of the witness commenced, and humanely proceeded as follows — (the council for the prosecution taking no notice of the superfluity of Peery's answers.)

"Do you know Michaul, or Michael, Carroll, the prisoner, at the bar?"

"Afore that night, Sir, I believe I knew him well; every thought of his mind, every bit of the heart of his body: afore that night, no living cratur could throw a word at Michaul Carroll, or say he ever forgot his father's renown, or his love of his good God; — an' sure the people are after telling you by tins time how it came about that night — an' you, my lord, — an' ye gintlemen, — an' all good Christians that hear me; — here I am to help to hang him — my own boy, and my only one — but, for all that, gintlemen, ye ought to think of it: it was for the weenock aud the old father that he done it; indeed, an' deed we had'nt a pyratee in the place; an the sickness was amongst us, a start afore; it took the wife from him, and another babby; an' id had himself down a week or so beforehand; an' all that day he was looking for work but could'nt get a hand's turn to do; an' that's the way it was; not a mouthful for me an' little Peery; an', more betoken, he grew sorry for id, in the mornin', an' promised me not to touch a scrap of what was in the barn, — ay, long afore the steward an the peelers came on us, — but was willin' to go among the neighbours an' beg our breakfast, along wid myself, sooner than touch it.

"It is my painful duty," resumed the barrister, when Peery would at length cease, — "to ask you for further information. You saw Michael Carroll in the barn that night? —"

"The sheep between his hands," answered Peery, dropping his head, and speaking inaudibly.

"I must still give you pain, I fear; stand up; take the crier's rod; and if you see Michael Carroll in court, lay it on his head."

"Och, musha, musha, Sir, don't ax me to do that!" pleaded Peery, rising, wringing his hands, and, for the first time, weeping — "och, don't my lord, don't, and may your own judgment be favourable, the last day."

"I am sorry to command you to do it, witness, but you must take the rod," answered the judge, bending his head close to his own notes, to hide his own tears; and at the same time many a veteran barrister rested his forehead on the table. In the body of the court were heard sobs.

"Michael, avich, Michael, a corra-ma-chree!" exclaimed Peery, when at length he took the rod, and faced round to his son, — "is id your father they make to do it, ma-bouchal.

"My father does what is right," answered Michaul, in Irish. The judge immediately asked to have his words translated; and when he learned their import regarded the prisoner with satisfaction.

"We rest here," my lords, said the counsel, with the air of a man free from a painful task.

The judge instantly turned to the jury-box.

"Gentlemen of the jury. That the prisoner at the bar stole the sheep in question, there can be no shade of moral doubt. But you have a very peculiar case to consider. A son steals a sheep that his own famishing father, and his own famishing son may have food. His aged parent is compelled to give evidence against him here for the act. The old man virtuously tells the truth, and the whole truth, before you, and me. He sacrifices his natural feelings — and we have seen that they are lively — to his honesty, and to his religious sense of the sacred obligations of an oath. Gentlemen, I will pause to observe, that the old man's conduct is strikingly exemplary and even noble. It teaches all of us a lesson. Gentlemen it is not within the province of a judge to censure the rigour of the proceedings which have sent him before us. But I venture to anticipate your pleasure that, notwithstanding all the evidence given, you will be enabled to acquit that old man's son, the prisoner at the bar. I have said there cannot be the shade of a moral doubt that he has stolen the sheep, and I repeat the words. But, gentlemen, there is a legal doubt, to the full benefit of which he is entitled. The sheep has not been identified. The herdsman could not venture to identify it (and it would have been strange if he could) from the dismembered limbs found in the barn. To his mark on its skin, indeed, he might have positively spoken; but no skin has been discovered. Therefore, according to the evidence, and yon have sworn to decide by that alone, the prisoner is entitled to your acquittal. Possibly, now that the prosecutor sees the case in its full bearing, he may be pleased with the result."

While the jury, in evident satisfaction, prepared to return their verdict, Michael's landlord who had but a moment before returned home, entered the court, and becoming aware of the concluding words of the judge, expressed his sorrow aloud, that the prosecution had ever been undertaken; that circumstances had kept him uninformed of it, though it had gone on in his name; and he begged leave to assure his lordship that it would be his future effort to keep Michael Carroll in his former path of honesty, by finding him honest and ample employment, and as far as in him lay, to reward the virtue of the old father.

While Peery Carroll was laughing and crying in one breath in the arms of his delivered son, a subscription, commenced by the bar, was mounting into a considerable sum for his advantage.

Posted by an extract of reflection at Thursday, October 22, 2015