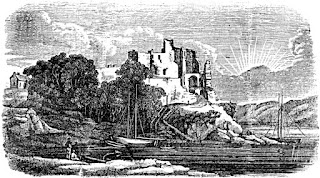 We think our wood-cut well calculated to catch the eye of a Dublinian. For lives there man, woman or child, in our good city, that has not heard of Carlingford, though but few have seen it. Carlingford — so renowned for its delicious oysters — oysters known as well to the poor mendicant who is tasked to crush their shells, as to the rich merchant who gobbles down their delicious insides — oysters as far superior to every other testaceous creature that open its bivalve to the tide, as to an Englishman is plum-pudding when compared with flummery — oysters, that give luxurious suppers to man, and open his heart as the knife opens the shell! In vain may the Parisian boast of his Carcale, the Londoner of his Colchester, or even our western shores of their green-finned Burrin, exquisite Pooldoody, or delicious Lisadill — who dare compare them to a rale Carlingford? Ye Aldermen of Dublin, and all who have experienced night after night the indescribable delights of a feast of oysters, and a flow of punch, come and give us all due credit for presenting you with a picture of that dear spot from whence your delights do come, and for giving "a local habitation and a name" to the birth-place of what your souls desire!

But Carlingford is not only worthy of regard as contributing to our creature-comforts, and causing us to rejoice both at snack and supper, but it is also noted for its scenic beauties and recollections. In all Ireland there is not (oh! we beg pardon, there is at Glengariff,) a bay so beautiful as Carlingford. Reader, if you were sitting on a fine soft sunny evening on one of the towers of that ancient castle built by King John, and looking westward and northward, you would enjoy a prospect which, if you pretended to taste, would cause you to cry out, "Magnificent," but if you really possessed it, would make you hold your tongue, and be all eyes. Under you the noble land-locked bay — before you and a few miles across the water, a distance which owing to the translucency of the atmosphere peculiar to the western wind, is only calculated to make objects more softly picturesque — yes — before you is the loveliest village in Ireland — Rostrevor. Its cottages embosomed in trees, its sun-lit villas, its pretty church, its obelisk, the honoured cenotaph of a brave soldier, who fell in his country's cause, leading Irishmen to victory. Then above the village, the wood-covered hills, swelling upwards until the green slopes mingle in the dark gorges of the Mourne mountains, over which Slieve Donald rises as lord of the range in pyramidal majesty. The western sun is gilding its crest; a feathery cloud all on fire with the sun's rays has rested on its topmost peak, and turbanned it with glory. Eastward, the mountain masses of shade flung upon the sleeping sea! Oh! for such a splendid scene, happy season, and felicitous atmosphere, — it would almost be well to be a Carlingford fisherman or even a Carlingford oyster, provided that as an oyster one could see through the sea and be susceptible of the picturesque, without the consciousness of being liable to be dredged for and gobbled up by voracious Dublinians.

But Carlingford is not alone remarkable for its oysters and its scenery, it is also worthy of an Irishman's regard, as the retreat, and its mountain country the fastness of the notorious Redmond O'Hanlon, the far-famed Rapparee, who about 120 years ago, played the part of Rob Roy in Ireland. The Irish gatherer of black-rent was quite a match for the Scotch rogue; as valiant in fight, as expert in flight, as terrible to the oppressor, as generous to the oppressed, as the Caledonian Kiltander. But poor Ireland has not got a Sir Walter Scott to cast a halo of renown about his name — "vate caret." She wants a poet to immortalize a cow stealer; and poor Redmond sleeps without his glory! Alas, that notable record of his exploits is out of print — the History of the Irish Rogues and Rapparees. Worthy Mr. Cross of Cook-street is now no more, a coffin maker occupies the shop where, in days gone by, we used to purchase these admirable effusions of the Irish press — "The Life of Captain James Freney, the Robber," "Laugh and be Fat," "The History of Moll Flanders," but above all, the most spirit-stirring, the one best calculated to teach the young Hibernian idea how to shoot in rale earnest, the "Irish Rogues and Rapparees," a book which has had as great an effect in Ireland as Schiller's play of the Robbers in Germany, namely, leading many a bold youth to take freedoms with others too often tending to the abridgment of his own — but we are rambling: we beg leave to drop our sportive strain, and introduce the "Annals of Cavlingford," furnished by a gentleman to whom not only we, but Ireland, lies under many obligations. — ED.

This little town is situated in the barony of Dundalk and county of Louth, near the foot of an extensive range of mountains, and on the S.E. side of a spacious bay. It was a station of considerable importance during the early ages of the English ascendancy in Ireland, and its first formation was consequent to the erection of a castle, which tradition attributes to the policy of King John. The town was never relguarly walled or fortified, but as it was exposed to continual dangers by being situated on the frontiers of the Pale, every principal domestic building was designed on the model of a fortress or castle. The remains of such structures were very numerous there not more than "sixty years since," and even at the present day three very interesting remains of that character invite the attention of the antiquarian. That pre-eminently termed King John's castle is an extensive and imposing ruin, "moored on a rifted rock," the sides of which are laved at the east by the sea, while to the inland is a narrow pass overhung by wild and lofty mountains. To command this pass the building appears to have been erected, and its form was necessarily adapted to the natural circumstances of its site, enclosing various baronial halls and apartments, a court-yard surrounded with traces of galleries and recesses, &c. The walls are in some places eleven feet in thickness, while the prospect from its summit over the hay, the Cooley, the mountains of Mourne, &c. is grand beyond description.

On the southern side of the town are the ruins of the Dominican Monastery. This still extensive and picturesque ruin exhibits in the long aisle and central belfry, traces of the pointed architecture of the fourteenth century. About midway between it and King John's castle are the ruins of a square building, with windows of an ecclesiastical character, curiously ornamented with carvings of animals, human heads, and sundry fancy wreathings. Near this on an adjoining eminence is a church of ancient foundation, with a large burial ground, in which may be seen a curiously carved stone and several monuments to the families of Moore and Millar. There is a glebe of about three acres lying about a mile from this church. The benefice is a vicarage in the archdiocese of Armagh, and patronage of the Primate. A small portion of the eastern part of the parish is all that has been preserved in the Down survey.

Carlingford formerly gave the title of Earl to the family of Taaffe, but the honour becoming, as it is supposed, extinct in the person of Theobald, the fourth earl of that name without issue, in 1738, his late Majesty George III. conferred the title of Viscount Cariingford on the family of Carpenter, together with the Earldom of Tyrconnel. The population of this ancient town is estimated at upwards of 1300. The bay is spacious, and the water deep; but unfortunately the navigation is rendered dangerous by hidden rocks. The scenery that surrounds it is of the most enchanting description, its shores being decorated with the most attractive villages, numerous bathing lodges ami agreeable cottages, behind which some mountains rise infinitely varied through all their elevation, here waving with ornamental woods, there glowing with heath or verdure, on the one side battlemented with a grey expanse of rocks, on the other exhibiting the industrious extensions of cultivation.

The mountain already alluded to as overhanging King John's castle, rises in height about 1850 feet, and is for more than two-thirds of its elevation composed of a succession of stairs formed of trap, passing towards the summit from a homogeneous, to a porphorytic texture. From the position and height of this eminence the inhabitants of Carlingford, during a great part of the summer season lose sight of the sun several hours before he sets in the horizon.

The following are a few of the more interesting annals connected with this town.

Posted by an extract of reflection at Thursday, October 01, 2015