Passion... you can't do genealogy and family history without meeting people with a passion. Whether it be for a family, a place or period their passion borders on the obsessive – like Mary Lennon, whose passion has put many a street directory online, or Davy McCallion, whose passion has enabled one of the biggest collections of WW1 and WW2 memorabilia, dress and equipment.

But having a passion for something is not just limited to the realms of history. Specify any topic and you'll find someone with a passion for it and this was proven to me recently when I came across a facebook page for Potato Bread Girl NI. As the name suggests PBG-NI has a passion for one of the essential parts of any Ulster Fry, potato bread, and travels around Northern Ireland looking for the best and rates them on her page. (If you have any recommendations in your locality I'm sure she'd like to hear from you.)

There are many forms of potato bread available today and while we all (OK... mostly all) enjoy a good piece of 'tattie' bread [pronounced "taytee" for thems that don't spake rite] in our frys – or perhaps toasted – the idea of adding potato to bread wasn't always so welcome. In fact, it was once deemed so reprehensible that a reward was offered to find the culprits.

In 1782 the claims that potato flour was being added to bread caused the bakers of Dublin to issue a proclamation condemning the practice. Saunders News Letter in Dublin reported that:


"The Bakers of the City of Dublin, observing... the unmerited Reflections that are daily cast upon the Baking Trade... are anxious to justify themselves to the candid Part of their Fellow Citizens, and wipe away the Aspersions which Malevolence and Falsehood dictate, submit the following Oath... [and] they hereby offer a Reward of Twenty Guineas, to any Person who will inform against, and bring sufficient Proofs before the Right Hon. the Lord Mayor, of a Baker having contrary to the Oath above recited..." 1


The content of this proclamation by the baker's of Dublin has to be understood in the context of the time, however, as it wasn't the making of potato bread itself that was the target of their 'concern'.

In that year, there had been one of the many bad harvests that have continually afflicted Ireland throughout the centuries and, as is always the case when flour becomes scarce, the price of bread had risen. The bakers were being accused of profiteering and of adulterating the flour used to make the bread. Indeed, the ability to make potato bread at all was called into question in the reported proclamation:


"The Charge of mixing Potato Flour in Bread, is too ridiculous to merit a serious investigation, as if there is a Possibility of reducing Potatoes to a flour that would mix with Wheaten Flour, it must be by Process so Expensive, as to destroy every Advantage that might arise from such a Fraud..."2


Fourteen years later however, the situation regarding the making of potato bread had changed somewhat as the Dublin Evening Post reported:


"Last week was held in Bath, the anniversary meeting of the West of England Agricultural Society.
"The following method of making potato bread, of which a specimen was produced to the Society met with general approbation:


'To any given weight of flour put half that weight of potatoes. Let the potatoes be well boiled, peeled, and mashed. Mix them up with flour, whilst warm – then add the yeast, and proceed as in the common method of making bread, observing to make the bread up as dry as possible.'

"Twelve months use of this bread in one family had proved it to be both wholesome and palatable."3


Now, I don't know about you, but I think it's clear from these two reports that we can put a time frame for the beginnings of the humble 'tattie' bread.

By the mid 19th century, the making of potato bread appears to have become more widely recognised. One reader of the Ulster Gazette and Armagh Weekly Journal, who replied to "a subscriber" seeking "as to what proportion to use Potatoes with flour in making bread" gave their recipe and expressed an opinion akin to PBG-NI when they said,


"This plan I have followed for some years, finding that bread made according to it is very superior to that made with flour only, and on this ground alone I would recommend its adoption, even if the potatoes were the same price as flour..."4


When the world became embroiled in the Great War of 1914-1919 the making of potato bread came under the scrutiny of the Government food agencies. These had contradictory results when in 1917 experiments in making potato bread were made by the governments in both Britain and France.

In Britain, a loaf made of 10% potatoes, 20% maize flour and the rest wheaten flour was produced. The results, according the the Birmingham Daily Post, where "found to be both palatable and good to look upon, which is more than can be said of most of the potatoless war bread. It is understood that steps may be taken to secure the general baking of such bread..."5

The scarcities caused by the war leading to an increasing interest in people growing their own food appears to have in given an impetus in this direction when, in November of that year, the Yorkshire Telegraph published a letter from a reader who asked for a way to use potatoes in bread for his friends "especially seeing that for the first time their gardens have grown potatoes." The papers response was to publish a 'standard' recipe for potato bread from a publication called Ration Recipes.6

In France, however, the situation was rather different. The Minister of Revictualling had a potato bread prepared and in August 1917 circulated all prefects with its recommendation. The experiment undertaken in the city of Lyons, said the Bath Chronicle, was declared a failure. While the bread was "found to be of excellent quality", it was reportedly "difficult to make and consequently expensive." "There was a danger," continued the report (quoted from the Morning Post), that "there was...a danger of establishing two different qualities of bread, and bringing about a scarcity of potatoes. The city has now decided to drop the experiments and to recommend the use of boiled potatoes rather than potatoes in the form of bread."7

The experiments in France and the utilization of potatoes in bread-making were even discussed in the French National Académie de Médecine. Examples of the nutritional values of various mixtures where presented along with their calorific values. These discussions "of great practical importance" according to The Lancet, had a mixed reaction.8 The breads were "found to be well risen and elastic... kept fresh a considerable time... and, even with 50% potato pulp, retained a satisfactory odour of wheaten bread." The criticism was made that increasing the amount of potatoes in the mixture reduced the nutritive value but this was countered by the suggestion of adding 10% bean flour to an admixture of 60% wheat and 30% potato. It was deemed "impracticable for small private bakers, but both possible and desirable in State, communal, and army bakeries, as well as in families that make their own bread." One participant believed that "it would be better to reduce the bread ration rather than to further dilute the official loaf with substitutes for wheat" while another stated the "important advantage associated with the use of potatoes in bread rather than in their natural state."

The report concluded with the comments that the Ministry of Food had taken up the subject (as alluded to by the Birmingham Daily Post earlier) and that:


"If other bakers are able to reach the Ministry's standard, the potato bread should be in great demand, and...its use is very desirable on account of the superior biological value of potato protein in comparison with that of wheat. The public should be urged to try the new bread at once, and we understand that the use of a certain percentage of potatoes in bread-making is about to be made compulsory.9


Whatever its origins and history, potato bread has become an integral part of the Ulster fry and as far back as 1938 a 'famous' Irish staple as highlighted below in this image from the Portsmouth Evening News of 23rd December. 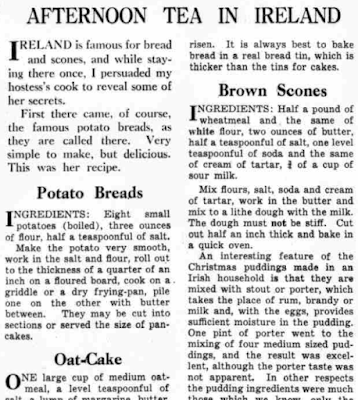 
Posted by an extract of reflection at Wednesday, October 07, 2015