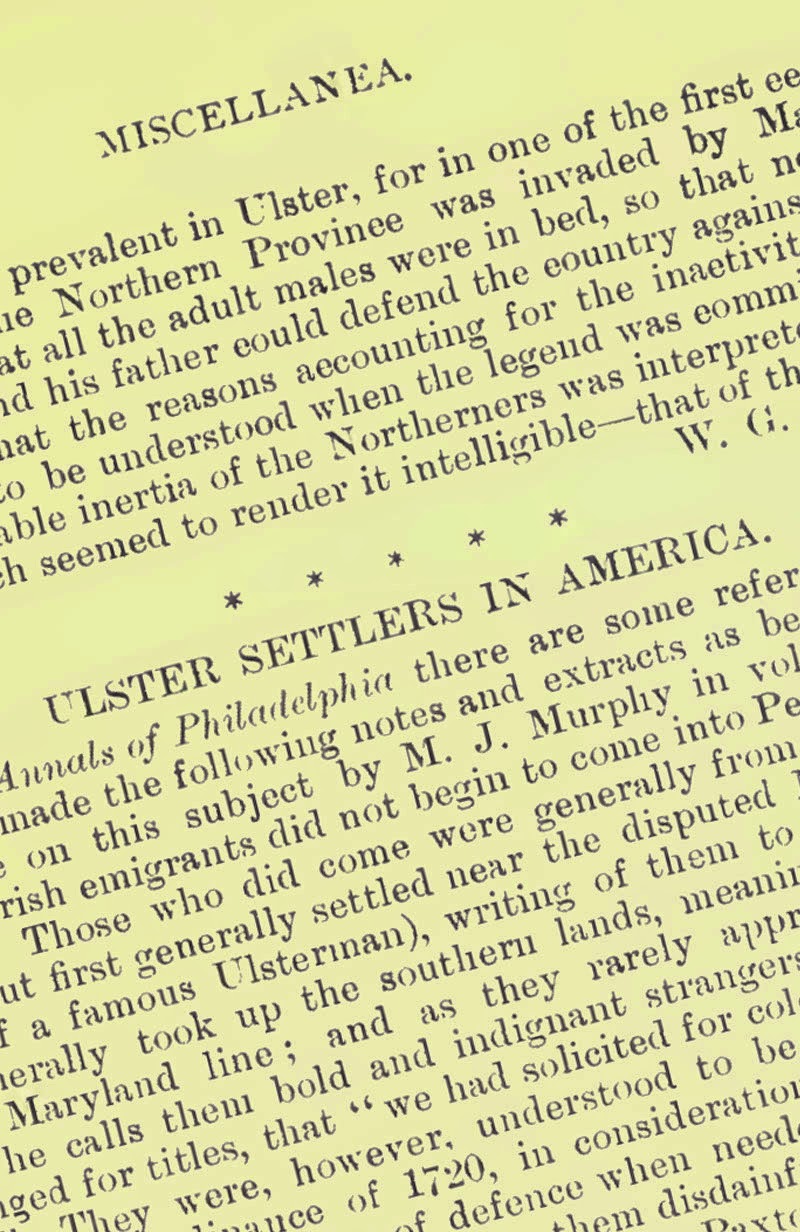 In Watson's Annals of Philadelphia there are some references to early Irish settlers. I have made the following notes and extracts as bearing slightly on the important article on this subject by M. J. Murphy in vol. ii., page 17, of the Journal. The Irish emigrants did not begin to come into Pennsylvania until about the year 1719. Those who did come were generally from the North of Ireland. Such as came out first generally settled near the disputed Maryland line. James Logan (himself a famous Ulsterman), writing of them to the proprietors in 1724, says they generally took up the southern lands, meaning in Lancaster county, towards the Maryland line; and as they rarely approached him to propose to purchase, he calls them bold and indignant strangers, saying as their excuse, when challenged for titles, that "we had solicited for colonists and they had come accordingly." They were, however, understood to be a tolerated class, exempt from rents by an ordinance of 1720, in consideration of their being a frontier people forming a kind of cordon of defence when needed. They were soon called bad neighbours to the Indians, treating them disdainfully, and were the same race who finally committed the outrage called the Paxton massacre. James Logan, a great mass of whose correspondence is still preserved, writes in 1729, saying that "he is glad to find the Parliament is about to take measures to prevent the too free emigration to America. In the meantime the Assembly had laid a restraining tax of twenty shillings a-head on every servant arriving; but even this was evaded in the case of the arrival of a ship from Dublin with 100 Papists and convicts, by landing them at Burlington. "It looks," writes Logan, "as if Ireland is to send all its inhabitants hither, for last week not less than six ships arrived, and every day two or three arrive also. The common fear is that, if they continue to come, they will make themselves proprietors of the province. The Indians themselves are alarmed at the swarms of strangers, and we are afraid of a breach between them, for the Irish are very rough to them." In 1730 he writes and complains of the Irish possessing themselves in an audacious and disorderly manner of the whole of Conestogoe manor of 15,000 acres, being the best land in the country. In doing this by force, they alleged that "it was against the laws of God and nature that so much land should be idle while so many Christians wanted it to labour on and to raise their bread." The Paxton boys were all great sticklers for religion and for Scripture quotations against "the heathen." They were, however, dispossessed by the sheriff, who burned their cabins, to the number of thirty, and restored their lands to the Indians. This violence was remembered with indignation, for, 25 years after, the Paxton massacre began by the killing of the unoffending Christian Indians living in Conestogoe. The Irish generally settled in Donegal. In another letter Logan writes, saying "I must own, from my own experience in the land office, that the settlement of five families from Ireland gives me more trouble than fifty of any other people." His successor, Richard Peters, had also trouble with the Irish, for on going in 1743 with a sheriff and magistrate to dispossess the Squatters at Marsh Creek, in Lancaster county, and to measure the manor land, they raised a riot and drove him away.

The inhabitants of Paxton were Irish Presbyterians. Their minister for sixty years was the Rev. John Elder. He came to them from Ireland in 1732, lived to be eighty, and died in 1792. Watson knew his son, Thomas Elder, "a gentleman of the Bar at Harrisburg." The Rev. John Elder held a colonel's commission in 1755. He writes from Paxton to the secretary, R. Peters. "There are within this few weeks upwards of forty of his Majesty's subjects massacred on the frontiers of this and Cumberland counties, besides a great many carried into captivity: and yet nothing but unseasonable debates between the two parties of our Legislature, instead of uniting on some scheme for the protection of the province. What may be the end of these things God only knows: but I really fear that, unless rigorous methods are speedily used, we in these back settlements will fall a sacrifice, and this part of the province be lost."

About 1720, Elizabeth M'Gawley, an Irish lady, brought over a number of tenantry, and settled with them near Philadelphia. She had a chapel attached to her house. Near the place (about one-eighth of a mile off) is a stone enclosure, in which is a large tombstone of marble, inscribed with a cross, and the name, "John Michael Brown, ob. 15 Dec, A.D. 1750. – R.I.P." He was a priest.

In 1741 the Philadelphia papers announced to merchants and shippers that Augustus Gun, of Cork, has power from the Mayor there to procure servants for America. Such an advertisement was, of course, an intimation that the Mayor of Cork was willing to send off sundry culprits to the colonies.

1729. In New Castle government there arrived last year, says the Gazette, forty-five hundred persons, chiefly from Ireland, and at Philadelphia eleven hundred and fifty-five Irish. New Castle is on the Delaware below Philadelphia; it is one of the ports to which emigrant ships sailed from Belfast in the last century. Watson has an interesting note about potatoes. He says – "This excellent vegetable was very slow of acceptance among us. It was introduced from Ireland in 1719 by a colony of Presbyterian Irish, settled in Londonderry in New Hampshire. They were so slow in its use in New England, that, as late as 1740, it was still a practice with masters to stipulate with some apprentices that they should not be obliged to use them."

In February, 1795, my great-grandfather, Captain Alexander Chesney, of Packolet, County Down, who fought for King George in the war of Independence, noted down the names of a few Ulster settlers which may now be worth recording. They were all settled in South Carolina before the war, and, unlike him, appear to have taken the American side. They were Presbyterians, as he was. Matthew Gilespey married Martha Chesney, and settled near Enora River, 1768, and left children. John Cook, married to Sarah Fulton, settled on the Packolet River, and left children. ---------- Nesbit, married to another Fulton, settled in Waxhaws, South Carolina, and left children. Thomas and John Purdy, of Glenravel, settled in Pennsylvania. Their sister, Jane Purdy, married to Robert Chesney or M'Chesney, of Dunclog, County Antrim, emigrated with her husband and eight children to America, sailing in "the scow James and Mary from Larne," and making the passage in seven weeks and three days. From Charlestown they travelled in wagons, paying a penny a pound for the use of them. They travelled thus to Jackson's Creek, "stopping at John Winn's old place, now Winnsborough," and leaving the family with some Ulster settlers, "John Phillips, now Colonel Phillips," till a home could be prepared. A hundred acres of land were surveyed for the Chesneys, a cabin bought, and some land cleared, when a message came from John Cook, of Packolet River, 60 miles off, inviting the family to settle there.

"I proceeded there on foot," says Chesney, "there being no direct road. I was to inquire for John Quinn, blacksmith, on Sandy River, about 20 miles off; the first house I came to. Then to Ned Hill's, where I crossed the river in a canoe, thence to my aunt's on the Packolet River. The settlers near, being all relations, gave me weight, and they soon found me a tract of 400 acres, which I had surveyed. I soon returned for the whole family, and we settled there."

This sketch of how a family, in almost tribal numbers, moved from Ulster to America, may be of interest to your readers. The rest of the MS. gives a vivid picture of the war, and the isolation of the writer from his kindred owing to his loyalty.