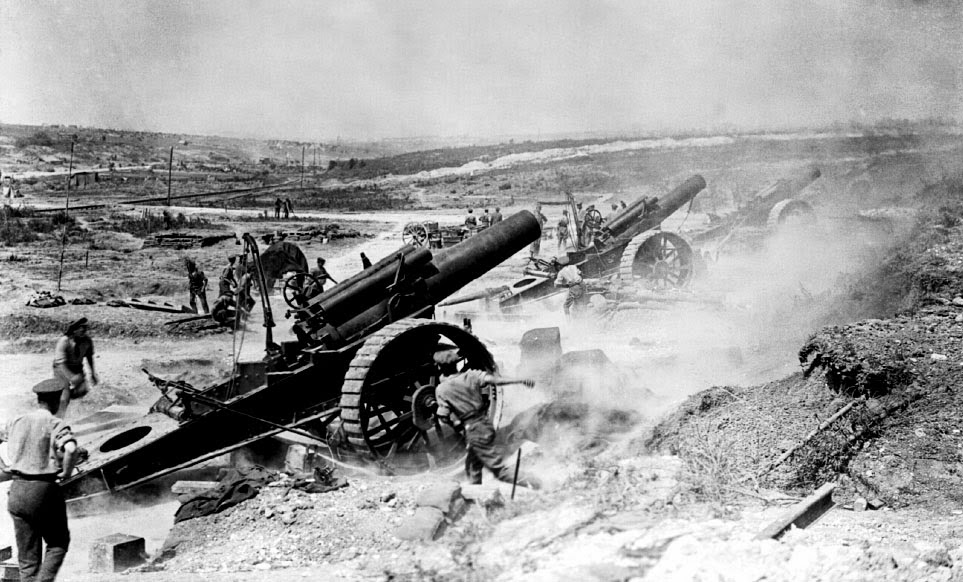 Over the hills where the grey hills rise
Smoke wreaths climb to the cloudless skies,
White in the glare of the noonday sun,
Climbing in companies, one by one,
From the strong guns,
The long guns,
That wake with break of day
And dutifully drop their shells a dozen miles away.

Far beneath where our airmen fly,
Slowly the Garrison guns go by,
Breaking through bramble and thorn and gorse,
Towed by engines or dragged by horse,
The great guns,
The late guns,
That slowly rumble up
To enable Messrs. Vickers to converse with Messrs. Krupp.

Garrison cannon is never swift
(Shells are a deuce of a weight to lift);
When they are ready to open shop,
Where they are planted, there they stop.
The grey guns,
The gay guns,
That know what they're about,
To wait at fifteen hundred yards and clear the trenches out.

4.7's and 9.4's,
Taking to camping out of doors;
Out of the shelter of steel-built sheds,
Sleeping out in their concrete beds —
The proud guns,
The loud guns,
Whose echo wakes the hills,
And shakes the tiles and scatters glass on distant window-sills.

Little cannon of envious mind
May mock at the gunners who come behind;
Let them wait till we've lined our pots
On to the forts and the walls of Metz;
The siege guns,
The liege guns,
The guns to batter down
The barricades and bastions of any German town.

Though there be others who do good work,
Harassing German, trouncing Turk,
Let us but honour one toast to-day —
The men and the guns of the R.G.A.!
The vast guns,
The last guns,
When Spring is coming in,
To roll down every Eastern road a-booming to Berlin!

Posted by an extract of reflection at Sunday, March 22, 2015