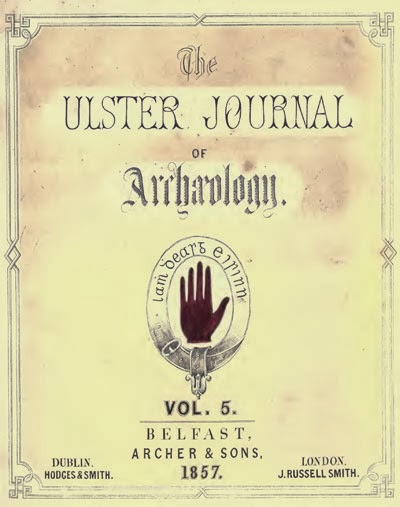 In 1789 Lieutenant Lawson published a Survey of Belfast Lough, a copy of which is now before us. On the Antrim side it extends nearly to Black Head, and on the opposite coast to Donaghadee. At the upper part it includes the town, and the district of Crumuck. [sic.] It is dedicated to the Earl of Donegall. Two engravings of the town itself, which accompany this Survey, are lithographed here.

An artist of about seventy years ago took upon him to give "A South Perspective View of Belfast, taken from Mr. Joy's Paper-Mill." The result of his labour appeared in a large tinted engraving, copies of which may be occasionally met with; and from it the reduced drawing, which is annexed to Lawson's Survey, and now copied here, has been made. Only two of the objects still familiar to the eyes of the present inhabitants appear in the view, – the steeple to the left being that of the Poor-house, and the next that of the Parish Church. The building with the heavy dome probably represents the Market-house, which then stood at the corner of High-Street and Corn-Market, the site now occupied by Mr. McComb's shop. The ancient bell which once repeated the hours, or rung the inhabitants to the market, was lately presented by the present Lord of the Castle to the Harbour Corporation. The old Long Bridge is shown in all its magnitude; but this, as well as Mr. Joy's paper-mill, which our artist selected as his point of sight, are now things of the past. The view, though far from being artistic or even correct, (buildings and objects which must have been in existence at the time, and within the range of vision, seeming to be overlooked,) gives, in a general sense, a very good idea of the appearance of Belfast at that period. The tongue of land, on which the old town originally stood, seems even at this comparatively recent time to have preserved something of its distinctive character, the water appearing to flow up for a great distance behind Ann-Street, – as far, indeed, as Arthur-Street, – and covering what now forms a very considerable portion of the modern town. The profusion of hillocks in the foreground, which may be presumed to represent hay-cocks, prove also that agricultural operations were proceeding in places now occupied by more imposing erections. The glass-houses in Ballymacarrett, if the magnitude of the volumes of smoke issuing from their summits be sufficient evidence, were in full blast; and they were at this time very generally visited by strangers as one of the sights of the town. Among the limited number of buildings here represented, which then composed the town of Belfast, some "old inhabitant" may happen to discover the house of his ancestors, or, peradventure, that near which his own childish foot-steps strayed. 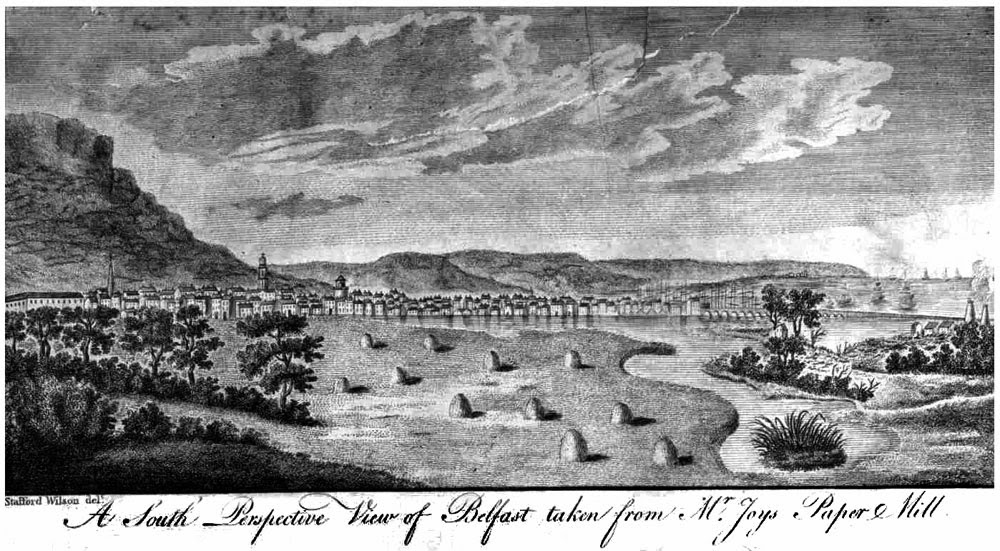 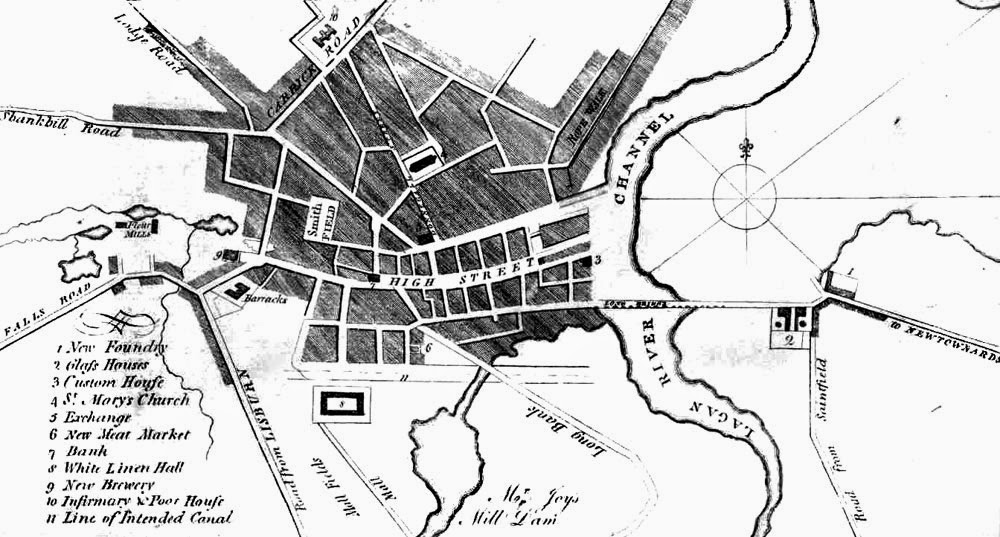 About the same time that this perspective view was taken, a ground-plan of the town on a confined scale was also before the public, either preparatory to Williamson's enlarged map, or reduced by some other hand from that more correct and valuable document. Of this also we give a copy. A very cursory examination of this plan will prove how very inferior it is in minute accuracy to the maps of modern times -- those of the Ordnance Survey, for example. The true direction of the streets, in some instances, is not properly laid down, nor their comparative length and breadth at all preserved. The parish church, rather incorrectly marked with reference to adjoining streets, is called St. Mary's; Waring-Street is very unlike itself in width; the streets in connection with North-Street are not laid down as they now are; and places are shown as being built on, which were open for many years after. The Exchange at this time seems to have been in Ann-Street. Most of the other public buildings marked, are still known; but what is the meaning of "Line of Intended Canal," running apparently in front of the Linen Hall, then recently erected? Was it some engineering speculation of the day, in connection with that famous stream called the Blackstaff?*

The water surrounding an island in the view is probably the Lagan; if so, the draughtsman has ignored both the Blackstaff and Joy's Dam. The situation of the vessels leads to the supposition that the drawing was made previous to any embankments on the county Down side of the Navigation; and if so, its actual date must have been somewhat previous to 1789.

The view shows the Long Bridge, but does not recognise Ann-Street; and this map of the town we suspect is a transcript in part of a much older Survey carelessly adapted to a more recent general map of the district. It may perhaps be considered a map of about 1789. It shows Joy's Dam and the old course of the Blackstaff falling into the river above the Long Bridge. It also exhibits what in the old maps is called the "Long Bank," – the barrier which in ancient times protected the land above the bridge from the tidal water. A gentleman, to whom we showed this map a few days ago, recollected having been taken, when a child, along this bank, and having seen the waves breaking against it. The arches, shown on the plan given by the continuator of Rapin's History, were most probably about the part where Joy's Dam is here shown as intersected by this bank. That water-work, indeed, seems to have been little more than a confinement of a quantity of water in what had been the old bed of the Blackstaff, before it was directed into its present straight course, when the old course most probably gave vent to the superfluous waters only. A very intelligent contributor suggests, what we suspect is the fact, that all the maps of Belfast, previous to a comparatively recent period, have only been alterations, (not amendments,) of some ancient map, now perhaps lost; unless Captain Philips's is assumed to be the original.

The present plan, though rather incorrect and unsatisfactory, is, as well as other maps of Belfast, (both of more ancient and more recent date) well worth bringing under notice, as records of the progress of the town; and their publication in this Journal would ensure their preservation for the benefit and gratification of future inquirers into our local history. No apology is necessary to the readers of the Journal for presenting them with a plan and view of Belfast less than a century old. The changes have been so rapid and so sweeping, that the Belfast of that day has already passed into the realms of Archaeology.

* Some contributor will, we hope, reply to this query in a future number.

This article appeared in the Ulster Journal of Archaeology, vol. 5, 1857.

Posted by an extract of reflection at Thursday, January 29, 2015