Being a Supplement
to the First Volume of the Dublin Penny Journal. 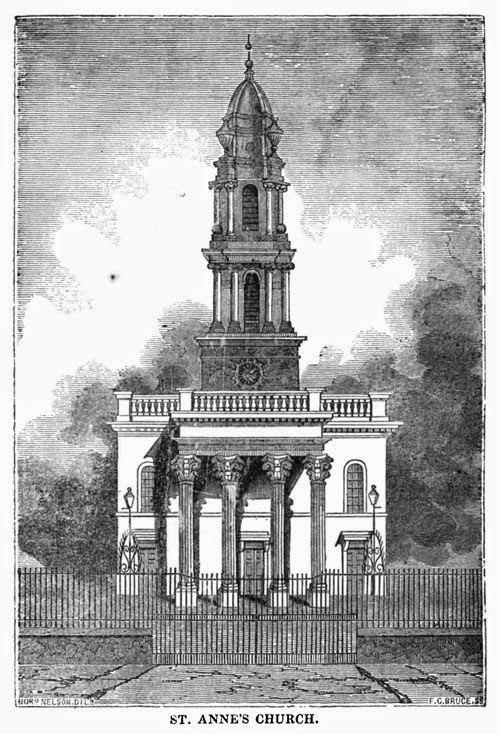 This church is situated in Donegal-street. It is the parish church, and was erected in the year 1778. It has a handsome Doric portico, and an Ionic tower, of considerable height, with a Corinthian cupola, which is of copper, the tower being formed of wood. 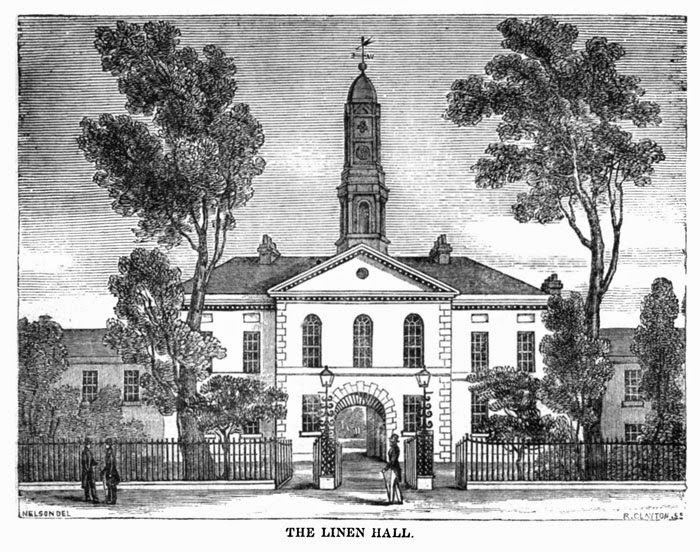 An extensive range of building, situated in Donegal-square, completely surrounded by a handsome railing, on a low brick wall, coped with stone. The area between the railing and the building being tastefully planted with evergreens, and flowering shrubs, affords a most agreeable promenade for the inhabitants at all seasons. The interior of the building is fitted up with different offices and rooms for the factors, and is particularly well calculated for the purposes for which it was designed. 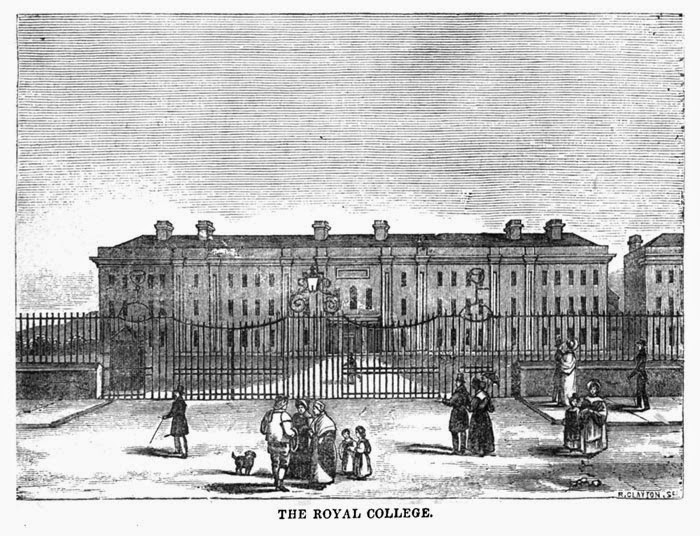 The edifice erected for this Institution is an extensive range of building, surrounded by a wall, with an iron railing in front, situated at the western end of the town, apparently designed to form the centre of a square, on three sides of which, houses, many of them of a very elegant description, have already been erected. The building itself, however, although presenting rather a good front, is by no means of that architectural character which such an institution would demand. 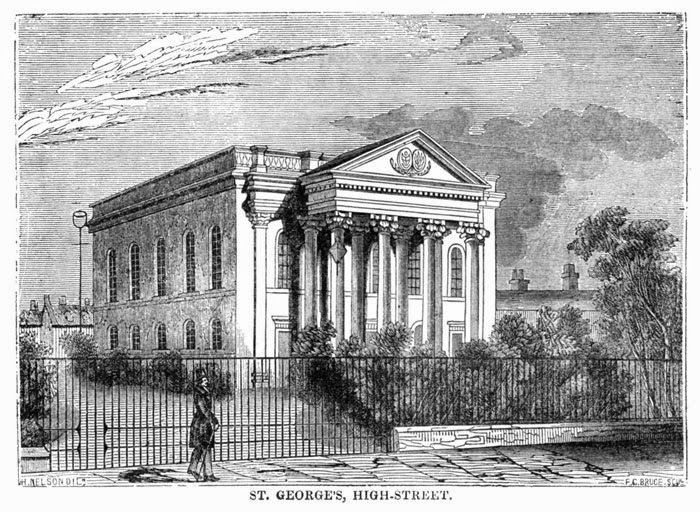 THE CHAPEL OF EASE (ST. GEORGE'S).

Situated in High-street, and erected in the years 1811-12, on the site of an old church taken down in 1777, is an elegant edifice, the portico being one of the most beautiful pieces of architecture in the kingdom. 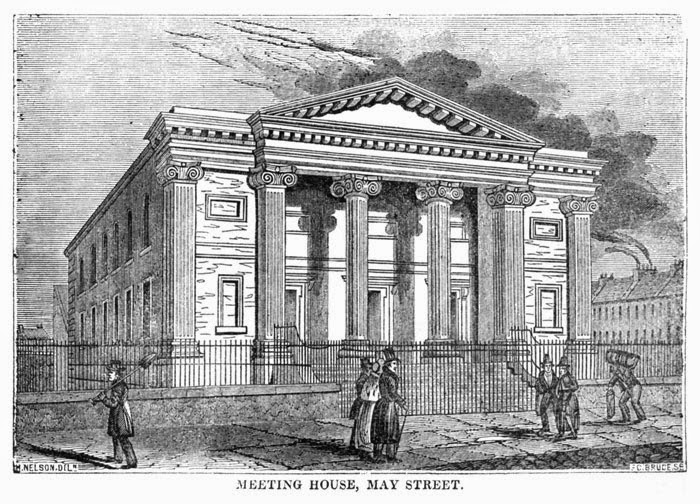 Is raised on framed foundations. The front is of modern or Scammozzian Ionic, having two columns and four pilasters, twenty-eight feet high, and fluted. The columns and interior pilasters form a piazza thirty-six feet long, and seven feet wide, over which rises a beautiful pediment. The front of the building is finished with a regular architrave, frieze, and block cornice, which give it a light, pleasing, and, at the same time, imposing effect. Around the windows are moulded architraves. The entrance is approached by a flight of eight steps, the floor of the building standing considerably above the level of the street. The interior is finished in a superb style. This elegant edifice was erected in the year 1828. 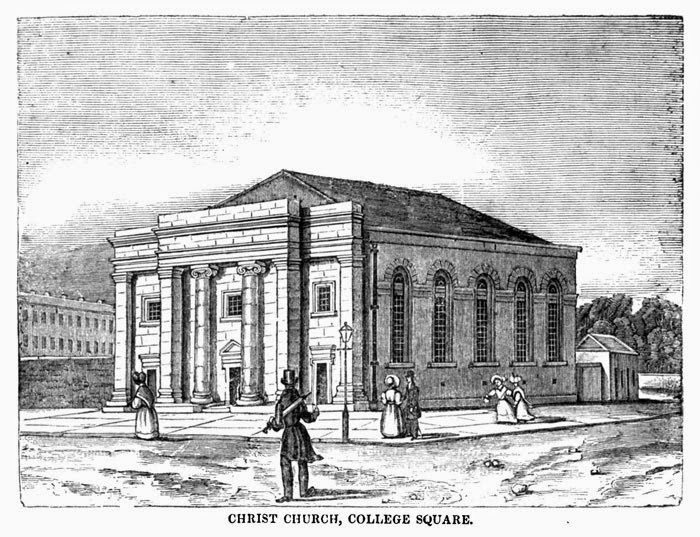 It being found that a Church was much wanted for the poorer classes of Protestants, the present edifice was erected. The sum of £2000 was granted by the Board of First Fruits; and £3000 were raised by subscription to complete it. It is a plain edifice, with a cut stone front and colonnade of the Ionic order, surmounted with an entablature; the other parts are of brick, with windows in recesses, ornamented with circular architraves. The interior is laid out to give as much accommodation as possible: there are seats for one thousand persons on the ground floor; and there is a handsome gallery, which holds upwards of six hundred persons -- it has been lately inclosed with an ornamental iron railing. It was opened in July, 1833. Near the Church a most commodious School-House has been erected, which was also completed out of the liberal subscriptions of the inhabitants. 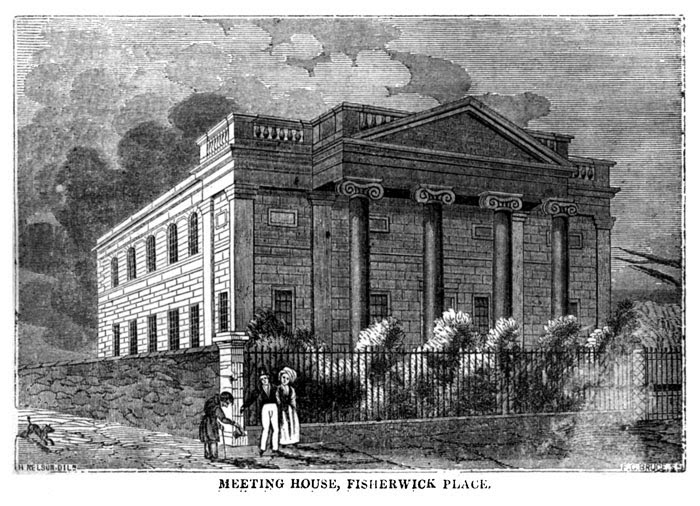 Erected in the year 1827-28, is built of polished freestone, of excellent quality; the superstructure resting on a basement of granite-stone, which is elevated above the surface about three feet. On the north and south sides are two ranges of well-proportioned windows, separated by a facia-course, which surrounds the building. The principal entrance is on the west front, which has a handsome portico of the Ionic order, consisting of four columns, and antæ, which support a regular entablature and angular pediment. The columns measure twenty-seven feet in height; the capitals of which are imitated from the Ionic temple at Ilissus, near Athens. The entablature of the order is continued along the front of the edifice, supported by antæ, over which runs an attic balustrade. The interior of the house, which is well lighted, displays considerable elegance.

Posted by an extract of reflection at Thursday, January 22, 2015