Belfast Sixty Years Ago: Recollections of a Septuagenarian (in 1896) 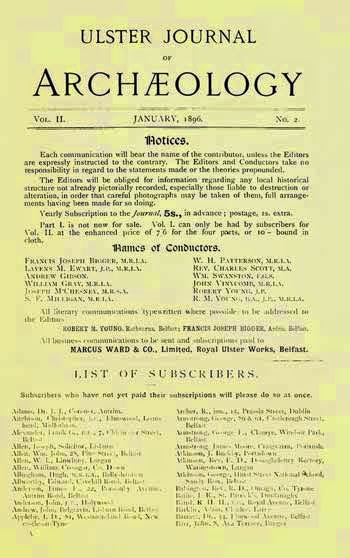 
DONEGALL PLACE, now full of shops, was, half-a-century ago, a quiet street of private houses. Some of them had gardens and trees in the rere, and there was quite a grove at the corner of the square where Robinson & Cleaver now have their establishment.

The cotton-spinning industry did not flourish in Ireland, nor did calico-printing, which my father attempted at Hydepark (so called after my mother, Anne Hyde). The firm was Batt, Ewing & Co. The Ewings, after leaving their house at Cottonmount, resided in Donegall Street (where the premises of the Brookfield Linen Co. now stand). Robert Ewing was married to a daughter of David Bigger, of the Trench, Molusk. who had, in conjunction with Moses and Aaron Staunton, started the Carnmoney Cotton Printing Works (now the Mossley Mills). Robert Anderson, a poet who contributed many pieces to the Belfast News-Letter, was a designer in this firm, having been brought over from the North of England by them for this purpose. Some specimens of these printed calicoes are still in the possession of one of the editors of this Journal, a grandson of David Bigger.

The old Belfast Bank was at the opposite corner of Donegall Street; where it now stands was the Assembly Rooms, where public balls were given and panoramas exhibited. I saw one of the siege of Antwerp, at that time a recent exploit. The Northern Bank was facing Castle Place, where the Bank Buildings now stand.

I was fond of seeing the machinery in the great factories on the Falls Road, but have a clearer recollection of a quaint garden there, where there were little ponds and islands, figures of Dr. Syntax and other celebrities carved and painted, and a water-wheel, which, as it turned, made music on bells. In those days watchmen cried the hours at night. Postage was heavy, and "franks" from members of Parliament were in great request. Our letters were folded square and sealed, without envelopes, and often crossed, making them hard to read, space was so valuable. Small-pox was very common, and blind and marked people were met with everywhere. I was not only vaccinated, but inoculated, by Moore, of Corn Market, who, I fear, broke the law to please my mother. He was a most popular apothecary and practitioner, the husband of a Greek lady. Beside Dr. MacDonnell, Dr. Purdon and Dr. Thompson were the chief physicians in Belfast. Typhus fever was often prevalent. At Newtownards I ventured to take a house that had been used as a temporary fever hospital, and some of my friends were afraid to visit me, but this was later on. I met Lord Dufferin there, fresh from college, and evidently full of talent.

Andrew Nichol, who drew many of the views in the Dublin Penny Journal, taught me drawing. He excelled in his water-colour drawings of the coast scenery of Ireland. Sir J. Emerson Tennent took him with him to Ceylon. There was also a promising young artist named James Atkins, who died in Malta in 1835, where my aunt and other friends had sent him to study. He copied the large picture, "The Martyrdom of S. Stephen," now in the Queen's College, I recollect an exhibition of his paintings for his mother's benefit.

In religious matters we were all exceedingly "low church." I was not confirmed till near my ordination by Bishop Mant, at his last ordination, at Hillsborough, in 1848. The great controversies of the day were between the "old light" and the "new light" Presbyterians. Dr. Cooke was the leader of the old lights, and I have often been taken to hear him preach, and can remember his favourite text, Col. i. 19. I liked better to go to the Parish Church, S. Anne's, where a military band sometimes played, and the Sovereign sat in his stall.

I went to see a public disputation between Rev. John Scott Porter, a Unitarian, and Dean Bagot, afterwards Vicar of Newry. It ended, as usual, in both parties thinking their champion victorious. Our own church was S. George's, which our family helped to build. It was a very dull Georgian building, with a huge "three-decker" pulpit in the midst. The oak seats, however, were handsome in their way, and so was the beautiful Corinthian portico. It was carved in Italy for Lord Bristol, the Volunteer Bishop of Derry, and, when his Palace at Ballyscullion was demolished, Dr. Alexander, Bishop of Down and Connor and Dromore, purchased it for S. George's. The Rev. R. W. Bland, late of Whiteabbey, was the incumbent; his curate, Rev. William Laurenson, an Oxford graduate, was a popular preacher, and, though he preached extempore, was never too long. It seems Mrs. Laurenson, in the gallery, made a signal with her pocket-handkerchief when it was time to wind up the discourse. As High Street was not always orderly in the evenings, the young ladies in our street went in a company to S. George's for mutual protection, and took notes of the sermons. Rev. A. C. Macartney was Vicar of Belfast. To Rev. William Laurenson succeeded Rev. William MacIlwaine. I heard him preach his first sermon as curate; he has told me that he unintentionally offended some of us by referring to "bats" as creatures unfriendly to the light, not knowing that there were Batts in the congregation. He was a learned man, and tried to make S. George's into a pro-cathedral, and did beautify it a good deal, brightening up the dull services; but the architecture of the church was too much against him. There used to be a transparency in the East window of David playing the harp.

The National Board of Education was a great subject of dispute among religious people; but my uncles were from the first in its favour, and put their village schools under the National system.

I must not conclude without a few words about the mail coaches, by which we used to get, by day or night, in about twelve hours from Belfast to Dublin or Derry. In fine weather an outside seat on the top of the Royal Mail was an exceedingly agreeable mode of travelling; we saw the country to much more advantage than from the railway, and, instead of skirting the dismal suburbs of the towns on the way, we dashed straight up the best streets to the chief hotel, where horses were changed, and a little crowd always collected to admire. The inside, however, was always stuffy, and often crowded; and the outside dangerous and uncomfortable in cold and wet weather. Besides, it was necessary to bespeak a place beforehand. I have driven 10 miles to Dromore for three successive mornings before I could get a seat in the Dublin coach. The red-coated coachmen and guards were fine manly fellows, and very friendly with the passengers, who, to be sure, always tipped them. The caravans, machines, and long cars that started from public-houses in Cromac Street, or in Ann Street at "The Highlandman," to take us to Ballynahinch or Newtownards, were poor affairs. The Derry coach started from the Donegall Arms, Castle Place (Robb's), and the Dublin coach from 10, Castle Street. The Carrickfergus and Larne coaches stopped in Donegall Street and North Street.

[1]  Narcissus Batt was Founder of the Belfast Bank.

[2]  Narcissus and Thomas were members of the Corporation for preserving and improving the port and harbour of Belfast.


This article appeared in the Ulster Journal of Archaeology, vol. II, no. 2, 1896.
Posted by an extract of reflection at Thursday, February 05, 2015