Ulster at the Somme - The Royal Irish Fusiliers 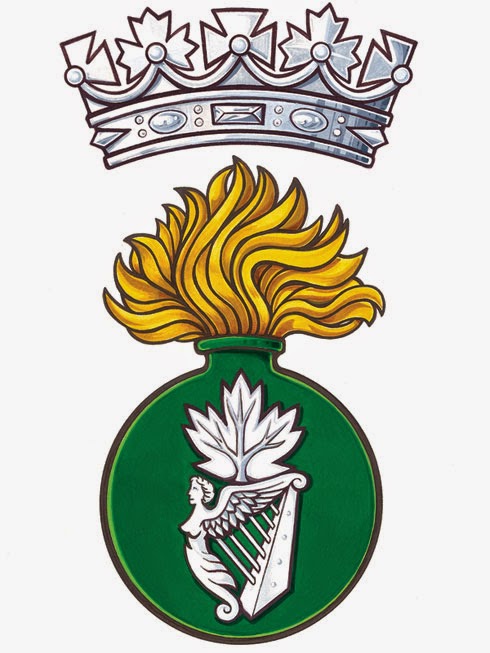 On the opening day of the battle, 1st July, 1916, the 1st. Bn. in the 4th. Division was still waiting to assault as its sister battalion, the 9th. Service Bn., was being cut to pieces in its advance with the Ulster Division. The 10th. Bde. was to advance in support of the 11th. and 12th. Brigades. As the leading Brigades formed up in front of their trenches, just before Zero Hour, they were met by continuous machine-gun fire and a wall of exploding shells which moved across No-Man's-Land towards them. But the attack was made and the German lines were penetrated at several points. The crucial question was; has the leading brigades reached their objectives? If they had, the 10th. Bde. must be held back or might otherwise be exposed to useless slaughter. Unfortunately, it was impossible to say how far the leading troops had got or in what strength. The signal for 'stopped by uncut wire' - One White Flare - was too much like the signal for 'Objective Gained' - three white flares - for observers to tell the difference between them. Messages had to be taken by runners across No-Man's-Land under much prodigious fire that many were lost. In consequence the 10th. Bde. began to move forward so as to cross the British Front Line at the time previously set; 9.30 a.m. Orders to remain in the trenches until further notice were not received in time and the supporting brigade had already started to move forward. Like the leading Brigades they lost many men, but those who got through joined the leading troops in the melee in the German trenches. Due to the terrible artillery fire the 1st. Royal Irish Fusiliers was held up in the British front line where they were pinned down for some time.

At 1.25 p.m. the Commanding Officer was ordered to send one Company forward with the 1st. Warwicks, which was also a support battalion in the 10th. Bde. They were to cross No-Man's-Land and reinforce a mixed party of Seaforths and Lancashire Fusiliers, who were hanging on to a salient in the enemy line known as the Quadrilateral, in face of repeated vicious enemy counter-attacks. "C" Coy. was sent on this errand which failed despite several attempts to brave the storm of machine-gun fire. The Company Commander was severely wounded. Realising at about 4 p.m. that "C" Coy. had not reached the Quadrilateral, the Bn. Commander now dispatched "D" Coy. on the same task. This company was successful and joined the Seaforths in the Quadrilateral. Some hours later, through confused orders, all troops except "D" Coy. withdrew from the Quadrilateral; these men were left in a very exposed position in the enemy line. Runners failed to get through to them during the night and it was feared that the company had been overwhelmed. In fact it had a busy and successful stay, fighting off enemy bombing-attacks with great spirit. Contact was made with Bn. H.Q. and the Company withdrew in good order at 11 a.m. next morning bringing with them all their wounded, three prisoners and a quantity of arms and stores.

The 4th. Division remained in the line for some weeks after this. The 1st. R.I. Fus. taking its turn in the trenches and helping in the sad task of burying the dead who had to be retrieved from No-Man's-Land. On July 17th the battalion was relieved and went into reserve, shortly afterwards it received orders to move further north and took no further part in the Somme blood bath.

Posted by an extract of reflection at Thursday, July 31, 2014