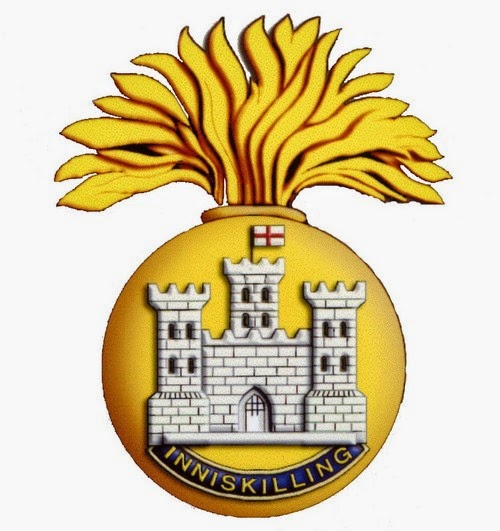 Seven battalions of the Royal Inniskilling Fusiliers took part in the Battle of The Somme, 1916. The two Regular Battalions the 1st. and 2nd. were in the 29th. and 32nd. Divisions respectively. The 7th. and 8th. Battalions served with the 16th. (Irish) Division and the 9th. 10th. & 11th. Battalions with the 36th. (Ulster) Division. The story of the Irish Division and the Ulster Division at the Somme is told in the chapters on these two Divisions.

The 1st. Battalion The Royal Inniskilling Fusiliers formed part of the 87th. Brigade of the 29th. Division. On 1st July this Bn. was holding the Line in front of the enemy strong-point known as Hawthorn Redoubt between the River Ancre and the strongly defended village of Beaumont-Hamel and was on the immediate left of the 12th. Bn. The Royal Irish Rifles of the 36th. (Ulster) Division. The task assigned to the 29th. Division was to capture the German positions along the ridge between Beaumont-Hamel and the 36th. Division's left, a most hopeless task, as the result proved. The enemy position rose in terrace after terrace of formidable entrenchments set thick with machine-gun posts with a perfect field of fire for hundreds of yards between them and the British front line trench.

At zero (7.30 a.m.) the Inniskillings moved forward in the general attack in lines of Platoons in Single File, immediately they got out of their assembly trenches they were met with a driving rain of machine-gun and rifle fire combined with a mortar and artillery barrage, it seemed impossible that anything could survive in such a cauldron of fire. The men faced the storm unflinchingly, the casualties were terrible and included the Commanding Officer killed with eleven other Officers before they had moved a hundred yards. A mere remnant of the battalion reached the enemy wire, there only to find that the wire had not been cut by our Artillery bombardment, this made further movement impossible. At this point they were met with heavy cross-fire from neighbouring enemy strong-points and what was left of the battalion had to take cover as best they could in the shell holes, movement in any direction being impossible. It was quite impossible to bring up reserves and eventually the whole 87th. Brigade, or what was left of it was compelled to retire, this in itself was a hazardous undertaking, and by the time they had returned to their own trenches many more casualties resulted. The casualties in the Inniskillings were desolating for that day, amounting in all, to 549 killed, wounded and missing. From the beginning the venture was a hopeless task, but the men put all they had into it and yet not a yard was gained.

The Battalion remained in reserve in this area until brought up to strength by drafts from home and in a couple of weeks moved north to Hazebrouck and the Ypres Salient. During the first week in October the battalion returned to the Somme Area and went into the Line in the Montauban Sector but took no part in any further major operation until the Somme Battle ended.

The 2nd. Battalion was in the Line on 1st July as part of the 96th. Brigade 32nd. Division. Their sector was immediately in front of Thiepval Village and on the right of their three sister battalions in the Ulster Division, the 9th. 10th. & 11th. Their allotted task was to advance in support of the two leading battalions of the Brigade. At 7.30 a.m. on that fateful morning the heavy British bombardment of the German positions suddenly ceased, and the air fell suddenly still, that moment of silence, seemed to some a year as the leading infantry left their trenches and moved forward. In common with the whole front they were immediately met with a murderous fire from everything the enemy had got, and although a little ground was gained the attack did not prosper. Three Companies of the Inniskillings were moved forward to the assistance of the leading battalions of English Infantry who had sustained terrible casualties and were being pinned down by the heavy machine-gun fire from the Thiepval Fortress. A little ground had been gained north of the village and the Division on the immediate left, the 36th. (Ulster) Division had made good progress. Shortly after mid-day an attack by all the available force of the Brigade was made from the positions gained in an attempt to turn the enemy flank at Thiepval, but all was in vain. The murderous fire from the enemy machine-guns made it impossible to advance a yard and due to the appalling casualties the whole of the 96th. Brigade was in effect out of the battle. During the afternoon units of the 49th. Division, whose role was to move in support of the 32nd. & 36th. Divisions, were sent forward to try and fill the gap which now existed between the left wing of the 32nd. Division and the right of the Ulster Division but nothing decisive was the result. The 2nd. Inniskillings during the rest of the day held trenches in the right rear of their three sister battalions in the Ulster Division. In spite of heavy casualties inflicted by enemy bombers and continuous machine-gun fire from the Thiepval Fortress the battalion held on to their positions throughout the night and all the next day. With the remnants of their Brigade they were relieved on the morning of the 3rd July.

After a few days out of the line the battalion was back in the trenches again, this time in font of the Ovilliers-La Boiselle sector, further to the right of Thiepval. Here on 9th July it went into the attack on a series of enemy trenches in front of Ovilliers which had resisted all efforts at capture since the opening of the battle on 1st. Advancing with great dash and resolution the battalion overran, captured and consolidated two lines of hostile trenches in their immediate front. Determined enemy counter-attacks followed in quick succession throughout the day but all efforts on the part of the Germans were held off with severe loss to the enemy. Again on the 13th July the 2nd. Inniskillings together with the 17th. H.L.I. went into the attack in an effort to extend their gains of a few days earlier, but this attack did not prove so successful as that on the 9th., casualties were so heavy in both Officers and Men that they could not hold on to the positions reached and were compelled to retire to their start point. The Battalion somewhat depleted in numbers were relieved in the front line on July 14 and were to take no further part in the Somme fighting.

Posted by an extract of reflection at Thursday, July 17, 2014