Ulster at the Somme - The 16th (Irish) Divison 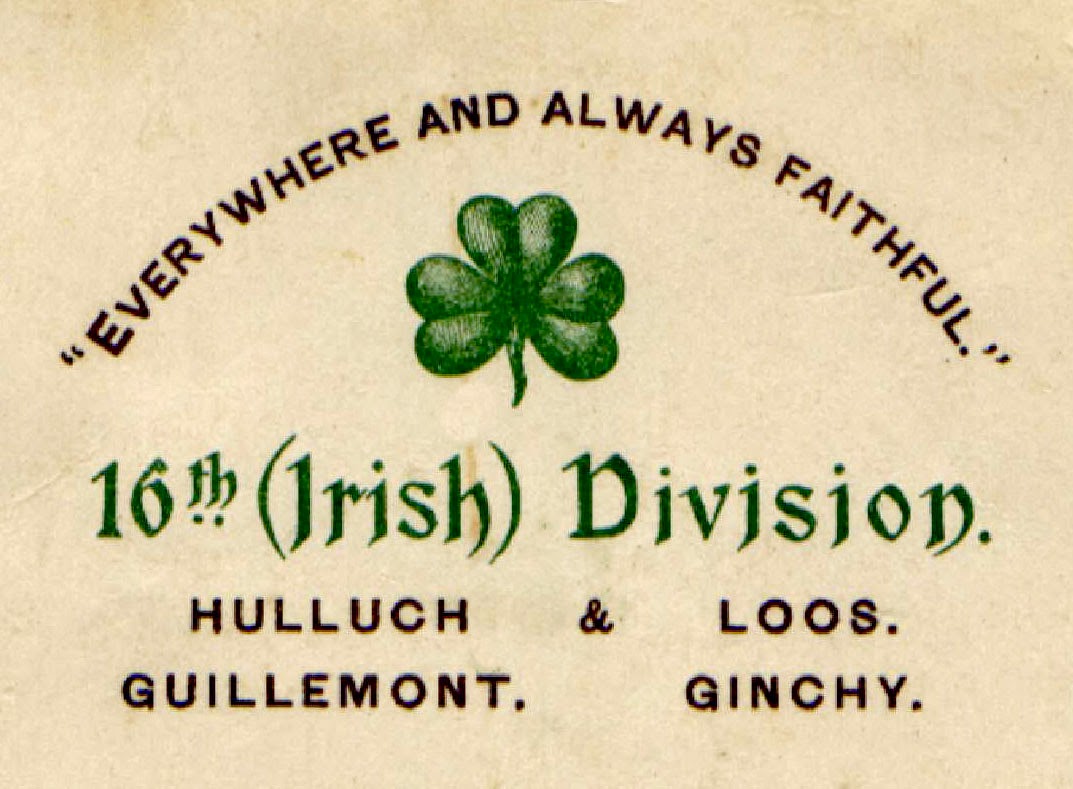 This Division made a great name for itself during the war and on several occasions fought side-by-side with the 36th. (Ulster) Division, notably at the Battle of Messines, June, 1917.

It was however at the Battle of the Somme 1916 in the assaults on the villages of Guillemont and Ginchy in September 1916 that the Division is most prominently identified. The 49th. Brigade, comprising the two Inniskilling Battalions and the two Irish Fusilier Battalions and the 47th and 48th. Brigades, the latter including the 7th. Bn. The Royal Irish Rifles, attacked the fortified village of Guillemont, situated close to the junction of the French and British Armies and therefore of great importance from a tactical point of view. Its capture was the most important achievement of the British Army since the taking of Pozieres. It was the last unconquered position in the old German Second defensive system between Mouquet Farm (near Thiepval) and the junction of the French and British Armies near Combles.

The conditions in which the Irishmen had to advance were appalling, the whole of this area was a scene of complete desolation and odious mud, churned up by continuous British bombardment during many unsuccessful attacks on this stubborn bastion since the battle of the Somme opened on 1st July. Movement over the ground in such conditions required a supreme effort apart altogether from the fierce hurricane of machine-gun and artillery fire which the enemy brought to bear on the advancing troops. Nevertheless the advancing Fusiliers and Riflemen hacked their way forward with great determination and traditional Irish dash in spite of the most severe casualties and drove the Germans from their positions, inflicting heavy loss on the defenders and taking many prisoners. A fierce enemy counter-attack on the newly won position in Leuse Wood was decisively beaten off by the two Inniskilling Battalions and the whole of the newly won line firmly held. The newly won ground had to be defended stubbornly for the next few days against many hostile onslaughts, the enemy realised he had lost as important key position and put in great efforts to regain the position lost to the Irishmen.

On September 9th, the 14th. Division again greatly distinguished itself by capturing the closely neighbouring village of Ginchy in an equally brilliant fashion. The attack was delivered during the afternoon of the 9th, and was one of the few successful attacks in a large scale British attempt at further advance. The Ulstermen of the Inniskillings, the Irish Fusiliers and the Rifles advanced with great determination through a fierce barrage of enemy fire so intense as to suggest that not even an insect could have survived in that hell of fire and death. The 47th. Bde, suffered terrible casualties during the assault and the 49th. Bde, moving forward in support came in for heavy punishment from the German Artillery and heavy machine-gun fire. The 7th. Rifles in the 48th. Brigade met with similar stubborn fierce resistance but not only did they capture their objective but a young Rifles Officer rallied a composite party of Dublins, Munsters and Rifles and led them through the village to the second, supporting, enemy position. Although they captured this position and dealt with the defenders who did not manage to escape, they found themselves too far forward and in an exposed position, the young subaltern very wisely led them back to the conforming British Line.

The capture of the German defence system at Ginchy was followed by a magnificent attack at short notice by the two Irish Fusilier Battalions on the enemy position north of Combles. This point was causing a lot of trouble to our troops in the newly won trenches and well did the "Faughs" eliminate the cause.

Some idea of the severity of the fighting in which the Ulster Brigade and the 7th. Rifles had come through may be judged from the fact that their casualties ran into four figures, but although the price was high an important and far reaching victory had been won.

The 24th. Division was shortly afterwards taken out of the line ato reorganise and a few weeks of afterwards found it with the Second Army in Flanders alongside the 36th (Ulster) Division. Here both Divisions were to remain until they, side-by-side, carried all before them in that brilliant and most perfect battle of the whole war - The Battle of Messines.

Posted by an extract of reflection at Thursday, July 10, 2014