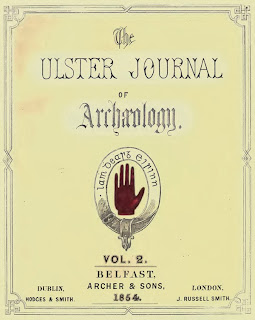 
Monaghan. -- A General Session was held at Monaghan, on the 2nd day of March, 12 James, 1, (1615,) before Gerard Lother, Esq., one of the Judges of the Common Pleas, and John Beare, Esq., Sergeant-at-Law, under a Commission dated the 15th Februaray in the same year, and an Inquisition taken before the following Grand Jurors:--

Who say that Brian McToole boy, of Ballenegar, yeoman, on the 16th September, 12 James 1, at Ardell, stole "a brasse kettle" worth 30s., "twoe firkins of butter" value £4, and a sword worth 6s. 8d., belonging to Robert Cowell, Esq. He says he is not guilty; which being denied by John Walker, Esq., the Attorney-General for Ulster, is put upon his trial, found guilty, adjudged, and ordered to be executed.

That Patrick bedy McMelaghlin McMahon, of Monaghan, yeoman, who was apprehended and committed to gaol on the 4th of February, 1614, for a felony, made his escape therefrom, on the 14th of the same month.

That Patrick Lea O'Connally, of Monaghan, yeoman, on the 9th November, 1614, stole a bay horse there worth 15s. the property of Gilldony O'Pronty, yeoman. -- Not Guilty.

That William Linton of Glasloghe, gentleman, on the 11th of January, 1614, insulted and committed an affray upon Edward Payne of the same place, yeoman, a true and faithful subject of the King, and with "a skeane drawne" worth 12d. which he held in his right hand, he struck him on the left side of the throat, giving him a mortal wound of half an inch long, and an inch and a half deep, of which he instantly died. The Jurors find that he killed him in self-defence, wherefore it is adjudged that he should be detained in prison until he produces the King's pardon, as in such cases usual. He produces the pardon and it is allowed.

That Donald McGonell, of Trughe, yeoman, on the 4th January, 1612, at Monaghan, stole a black horse worth 40s. belonging to Sir Edward Blayney. -- Not Guilty.

That Morroghe McPhilip of Balleviddegan, yeoman, on the 2nd January, 1612, stole 2 cows, one being black, having her horn cut, and worth 20s. and the other without horns, of a brown colour, and of the same value, the property of a person unknown. -- Not guilty.

That Patrick beddy McPhilip, of Monaghan, yeoman, on the 14th June, 1614, stole a mare worth £3, the property of William Bradborne of the same town. -- Guilty. -- Says he is a clerk, upon which comes Lewes Pruderehe the Bishop's minister of that place, and the book being delivered to him by the court, and the accused having read it, it is adjudged that his left hand be branded, and that he be afterwards delivered to the ordinary, to be safely kept under the peril thereupon incumbent.

That James boy McArdell, of Tullykeghan, Henry McEmiske, and Art McMahon McGillpatrick, of same, yeomen, on the 12th January, 1612, there stole a bay horse, worth 40s. the property of Donogh Modder Brady, and a grey horse of the same value, the property of Owen McTurlaghe O'Ptely. -- Said James and Henry are found guilty, and adjudged to be executed.

That Patrick oge O'Loghran, of Killeehoran, yeoman, on the 2nd February, 1614, at Killvilley, stole a cow worth 20s. belonging to Neill O'Conally of Kirboyan. -- Guilty. -- To be executed.

That Hugh McDonell of Clankelly, County Fermanah, yeoman, on the 3rd of October, 1614, at Clonis, County Monaghan, stole a cow worth 20s. the property of Master Dunbar, and that he was relieved, comforted, abetted and sustained, by Gillterny McGudrive, of Clonis, yeoman. -- No finding of the Petty Jury.

That Art McToole McOwen, McMahon, of Lisinakeny, Gerald roe O'Byrne, of Aghetowne, James O'Boyle, and Patrick O'Boyle McJames, of same, yeoman, on the 20th December, 1612, at Aghetowne, stole 14 pigs, price 4s. each, the property of Thomas beddy McEehee. -- No finding.

That Patrick McAve McPatrick boy McArdell, of Cavancreevy, yeoman, on the 2nd of May, 1614, at Mucknowe, stole a black horse worth 30s., the property of Donald McJames O'Hughe. -- No finding.

That Tirlaghe O'Duffy McGillpatrick O'Duffy of Balleclonarne, yeoman, on the 1st December 1614, stole one grisell hore [Sic, it ought to be "hair."] mare [equam canam] worth 40s., a brown mare of the same value, and a cow worth 20s., the property of Patrick McCabe. -- No finding.

That Tirlagh Duff McGerrot O'Relly, of Ballelurgan, yeoman, on the 16th January, 1607, insulted Cormucke O'Looy, of the same place, yeoman, a true subject, and with a drawn sword worth 5s, which he held in his right hand, he struck him on the top of the head, giving him a mortal wound of 12 inches long and two inches deep, of which he then and there instantly died. -- Guilty. -- It is adjudged that he be drawn upon a hurdle "et membra sua et interiora ex ventre suo capiantur &c," as in former cases.

That Phellemy oge O'Conally, of Drumroghan, yeoman, on the 1st November, 1614, stole a grey mare worth 40s., and a chestnut mare [flavam equam] of the same value, the property of Hugh O'Shallowe. -- No finding.


Ardmaghe. -- A General Session was held at Ardmaghe, on the 8th March 12 James 1., before the same Judges, and under the same Commission, and an Inquisition being taken before the following Grand Jury:--

They say that Brian O'Mullen and William O'Mullen of Annacreene, yeomen, on the 2nd of January 1612, at Drumullen, stole a cow worth £4, the property of Richard Hanley. -- Guilty. To be executed.

That John alias Shane O'Neale, of Ardmagh, yeoman, on the 1st October, 1614, at Naven, stole a bay mare worth 40s., belonging to Owen O'Donellan, yeoman. -- Acquitted.

That Laghlin McDonell O'Hanlon of Carrickelaghan, yeoman, on the 10th December, 1614, there, stole three cows worth 20s. each, and three oxen worth 40s. each, the property of Henry Acheson, Esq. Guilty. -- To be executed.

That Patrick Roe McSlevan, of Killcluny, yeoman, on the 4th July, 1614, at Corlosty, stole two heifers worth 10s. each, the property of Glasny McGlasny O'Hanlon. -- Acquitted.

That Owen O'Neale McEvicker, of Ardmaghe, yeoman, on the 17th February 1614, at Dromonbegg, stole 5 cows, worth 20s. each, the property of William Pallmer yeoman. -- Acquitted.

That Hugh and Owen O'Donellan, of Cargin, and Manus Sallagh O'Hanlon, of Orier, yeomen, on the 10th December, 1614, at Carricklaghan, stole three oxen worth 30s. each, and three cows of the same value, the property of Henry Acheson, Esq. -- Acquitted.

That Shane O'Daly of Dolleghgallegan, yeoman, on the 17th of October, 1614, at Drumishe, burnt the mansion-house of Patrick McArdell a true and faithful subject. -- Acquitted.

That Patrick and Brian McMaddoicke of Carickin, yeoman, on the 10th December, 1614, at Carricklaghan, stole three oxen and three cows price 20s. each, the property of Henry Acheson, of Dromlacke, Esq. -- No finding.

That James Maffott and Saundy Cavorte, of Ardmaghe, yeomen, on the 20th November, 1614, stole 4 cows, worth 20s. each, belonging to George Chambers Esq., and another cow worth 20s., the property of Nicholas Gasse, and that Richard Greames, of Dromargan, yeoman, on the 21st of the same month, relieved and abetted them. -- Acquitted.

That Brian grom McCan, of Derrymakeshe, yeoman, on the 13th November, 1613, instigated and provoked, Patrick McFardorogh McCan, yeoman, to kill and murder Toole McPhellemy McCan, gentleman, a true and faithful subject, and that on the 17th of November following, at Dromenecullyn, with a drawn sword worth 5s., which the said Patrick held in his right hand, he gave him a mortal wound of four inches deep, and one inch in length in his breast [super anteriorem partem pectoris] under his right arm or sleeve [subter dextram manullam] of which he instantly died. -- Acquitted.

That Saundy Cafforte, James Maffott, and Nicholas Gasse, of Ardmaghe, yeomen, on the 21st November, 1614, stole two cows there, worth 20s. each, the property of Granye ny Gwire, and Jowan ny Kene, widows. -- No finding.

That on the 13th February, 1614, Con McToole boy McMahon, of Doynan, yeoman, was there taken and apprehended by Hugh McManus, one of the Sheriff's bailiffs, for the theft of a cow the property of Gilleballagh McCasy, the which bailiff intended to bring him before a Justice of the Peace, when one Art McHugh roe McMahon, of Doynan, yeoman, forceably rescued him. -- No finding.

The above article is reproduced from the Ulster Journal of Archaeology, vol. 2, 1854.
Posted by an extract of reflection at Saturday, October 19, 2013