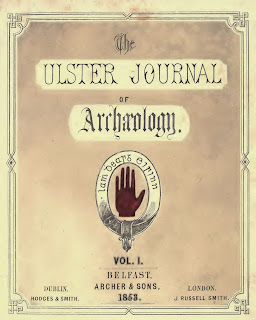 County Antrym. -- An Inquisition taken at the castle of Carregfergus before the same Judges on the 8th of March, 10. James 1. (1613) by the following Jury :

Who say that Richard McEvagh late of Munomer, yeoman, on the 3rd of November 1613, at the fields of Tullee, stole a chestnut-coloured mare worth £5, the property of Brian O'Mullchallen. -- Not guilty.

That Teige O'Brine, of Lisnetudor, County Down, yeoman, on the 3d of August 1613, at Lisnegarvae, stole a horse worth £5, belonging to John Dobb. – Guilty. -- The sentence is that the gaoler shall take him back to prison and strike off his fetters, and that he be thence led through the middle of the town of Carregfargus to the gallows, and there hung by the neck until he is dead.

That Patrick Poyne McGrehan, of Killagh, yeoman, on the 10th of December 1613, at Lilke stole 12 pigs the property of Henry McGee, price 6d each. -- Acquitted.

That Gillaspicke McGilpatricke and Gillpatrick McAlexander, of Dunluce, yeomen, on the 1st of November 1613, at Glanarrae, levied open war against the King and his lieges, and at Moylone Shane Omony, of Oldstone, Donnell O'Brenan and Collough Moder McCormock O'Mulchallen of the same, supplied them with meat, drink, and other necessarries. -- Acquitted.

That Abra Loe of Mounterenede, gentleman, and Neale McHugh McMurtagh O'Neale, of Fragh, gentleman, on the 26th December, 1613, at Mountereneddee, insulted Brian boy McRedmond O'Chane with a dagger (pugione) worth 2s. which Abra held in his right hand, and that said Neale with a knife (cultro) worth 6d., struck him on the left side of his face, between the left eye and his ear, giving him a mortal wound of an inch in breadth, and six inches deep, of which he then and there instantly died. -- Guilty. -- The sentence is the same as that above given in the case of Teige O'Birne.

That William Cowen, of Castlenorten, yeoman, on the 13th November, 1613, at Antrym, stole two yards of linen, called Karsene, worth 4s each yard, the goods of William Nocke. -- Acquitted.

That Brian McGilleduffe McHughe, of Port Rushe, gent., and Phelim McHughe, of the same, yeoman, on the 25th November, 1613, in the fields of Maghrimore, stole a black mare, worth £5, the property of Owen O'Haghie. -- Acquitted.

That Edmond o'wise Adam Magye, of Iland Magye, yeoman, on the 10th February, 1613, between 10 and 11 o'clock at night, burglariously broke into the mansion house of Thomas Lock, at Brad Island, and stole a coat (vestimentum) and other things worth £3, and beat and wounded him with a sword. -- Guilty.

Sentence of death pronounced as in the two former cases. But in the same cession he says that "he is a clerk and prays the benefit of clergy;" upon which comes Samuel Todd, minister of the reverend father in Christ, Robert, Bishop of Connor, the Ordinary of that place, constituted in the said Bishop's stead to challenge, seek for, and receive, clerks accused of any crime, and the book being handed to him by the Court he reads, that the clerk and the said minister seeks that the said Edmund, otherwise Adam, should be delivered up to the Ordinary. Therefore it is considered by the Court that the said Edmund should be branded, (cauterizatur) in his left hand according to the form of the statute.

That Rowry McHughe McGill, of Batroder, yeoman, and Reelin Boy McCurly, of the same, yeoman, on the 26th of October, in 1613, in the fields there, stole a brown horse, worth £7, belonging to Alexander Clare. -- Guilty.

To be executed. That Art McHugh, of Syconway, gent. on the 4th October, 1613, at Inchcloughandowne, broke into the stable of George Hunter, and stole his gelding, worth £6 10s. – Acquitted.

That Neale boy Roe McConnell, of Root, yeoman, on the 14th February, 1613, at Root, stole two heifers worth 13s 4d each, the property of Alexander McCaye. -- Guilty. -- To be executed.

That Brian O'Heuran, of Donaneny, yeoman, on the 10th November, 1613, stole a roan-coloured colt worth £6, the property of Sir Randell McDonnell, Knight, and that he was abetted by Manus Roe Magye, of Carrigfergus, yeoman. -- Neither verdict given nor sentence pronounced.

That Murtagh McColville, of Moyalle, County Tyrone, yeoman, on the 1st March, 1612, at Balligeat, County Antrim, stole a mare worth £5, the property of Hugh Oge O'Mulchallen. -- Acquitted.

That Donnell Grome McAlexander, of Downenenye, yeoman, on the 13th of December, 1605, at Knocklade, insulted Lawrence McKirckpatrick, of Knockfergus, merchant, and with a sword worth 5s. which he held in his right hand, he struck him on the right side, giving him a mortal wound of three inches broad and five inches deep, of which he immediately died. -- Guilty. -- To be executed, "ac semi mortuus ad terram prosternatum ac interiora &c," as in a former case above set forth.

That Gillaspicke McGilpatrick, and Gillaspicke McAllexander of Dunluce yeomen, on the 1st November, 1613, at Glenarra, waged open war by murdering and spoiling the Kings liege people. -- Guilty. -- Sentence as in the last mentioned case.

County Cavan. -- A Gaol delivery at Cavan on the 30th of March, 11. James I. (1614,) before Sir Francis Aungier, Knight, Master of the Rolls, appointed by Commission dated the 21st March, 1613, to deliver the gaol &c., in the said county, before the following jurors.

Who say that Melaghlin Boy O'Gown, of Laghrawre, and Cale McTeig boy Brady, yeomen, on the 20th of August, 1613, with other traitors, at Lowgrawre, levied war, and that Patrick Molue, Cale Duffe Olynsey, and Shane McPatrick McCale duffe Olynsey, yeomen, abetted them. The said Patrick pleads not guilty, which the Attorney-General, John Walker, Esq., denies. The Jury find him guilty. The sentence is that he be led back to prison, his fetters taken oflf, that he be then led to the place of execution and hung until he be dead, "et ipse semivente ad terram prosternato et membra," &c., as in foregoing cases is mentioned, with this addition, "that his head should be cut off," before his body was divided into four parts.

That Melaghlin boy MGowne, of Killichuan yeoman, on the 15th December, 1613, rebelled, and that Gillise Dowdie supplied him with meat and drink. -- Judgment not given.

That Phelym McBrene Barren O'Connally, and Patrick McArt McThomas, of Dartry, county Monaghan, yeomen, on the 30th June, 1610, at Dronecasshell, county Cavan, stole 4 mares worth 40s. each, the property of Phelem McCahill. -- No judgment entered.

That Walter McCartan, of Artelogh, yeoman, on the 20th May, 1608, at Ballegowne, stole a horse worth 40s., belonging to Edmund Olinche. -- Acquitted.

That Nice O’Daly, of Newcastle, County Meath, and Murtagh Duffe, of same, husbandmen, on the 18th July, 1610, at Dromharny, County Cavan, stole a horse worth 40s. the property of Cahir boy O'Reyly, of Dromharny. -- Acquitted.

That Mulmore McPhilip oge O'Realy, of Colgan, and Thomas McTeige oge Offarrell, of Rue, Co. Longford, gentlemen, on the 17th November, 1613, at Dromhillagh, stole two horses worth £ each, the property of Owen McCabee, yeoman. -- Acquitted.

That Brene Offarrall, and Shane O'Realy, of Turchor, yeomen, on the 7th December, 1613, stole at Turchor, 15 pigs price 2s each, the property of Mulmore McConehor O'Rely, and were aided by Owen boy O'[               ] Patrick, Edmund, and Shane Olinche, of Croffegan, yeomen. -- Said Brian is found guilty and sentenced to be executed at the gallows in Cavan.

Posted by an extract of reflection at Friday, October 04, 2013