Send me your memorials - Lest we forget... 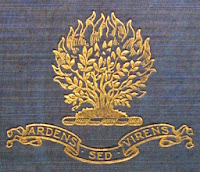 Through these pages many people have discovered, some for the first time, an indication of the service given by their ancestors and family members in that great conflict.

However, even when it was first published, it was recognised that, for a number of reasons, there where many names not recorded on the Roll of Honour. Time has shown that there are other errors - in the spelling of names, rank or regiment etc.

Also recorded on the congregational memorials (and not the Roll) are the names of many of the women who played their part serving as nurses etc in the Queen Mary's AAC or the VAD who served at or near the front providing essential care for the wounded and dying.

I am currently undertaking  a project to compare the names in the Roll of Honour and those recorded on the memorials erected in the many congregations in an effort to correct those errors and I am appealing to Presbyterians for their help in this by sending me images of their congregation's memorials and any additional information they can to help me achieve that aim.  Examples can be seen on the site by viewing the congregations of Anahilt, Ballyblack, and Ballygrainey.

Even if you are not Presbyterian but belong to another denomination I would love to receive images and information on your memorials.

So many young men gave of themselves - some their all - and deserve to be remembered for the courage they showed in the many trials they had to face in answering the call of their nation.


Unfortunately so many are just a name... or an old photograph found in the back of a drawer...

Paul Gilchrist Pollock was among the missing on that fateful July day in 1916 when so many Ulstermen fell at the Somme but he was not to be found on the Commonwealth War Graves Commission (CWGC) or in the official lists in "Soldiers Died in the Great War."  However, Paul (son of the minister Rev. John Pollock) was recorded in the Roll of Honour for St Enoch's Presbyterian Church in Belfast. 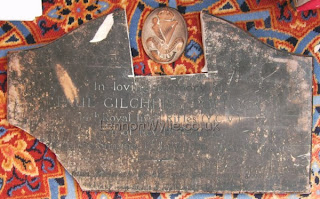 Mary cleaned the memorial and cares for it still... 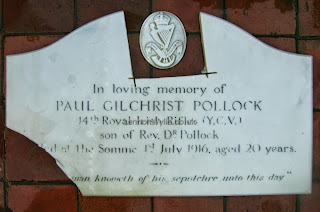 ... and due to the efforts of Alan Curragh and the RBAI Inst in the Great War, Paul has now been included in the ranks of the CGWC.

How many other memorials have been lost over the years?

Thankfully many have been rescued and are now in the possession of the Somme Heritage Centre to be preserved.

If you can help please email your images and information to me at eddiesne@yahoo.co.uk

Posted by an extract of reflection at Sunday, October 13, 2013