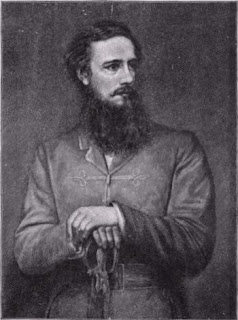 A STATUE OF NICHOLSON TO BE PLACED IN MARKET SQUARE.

Owing to the kindness and generosity of Mr. Henry Musgrave, O.B.E., D.L., Belfast, and an old Lisburn man himself, Lisburn is to have a statue of Brigadier-General John Nicholson, of Indian Mutiny fame.

This interesting announcement was made at the monthly meeting of the Lisburn Urban Council (Mr. Wm. Davis, J.P., chairman, presiding), and came in the form of a letter from Mr. Musgrave's solicitors, Messrs. Charles and J. Black, Belfast, viz. --


Dear Sir -- Mr. Henry Musgrave instructs me to offer to erect in Lisburn a statue of General John Nicholson, a native of the town, and who was killed at the siege of Delhi. The statue will be a work of art and a feature in your town.

It will be executed by Mr. Pomeroy, M.A. It will portray General John Nicholson leading and encouraging his men, and will be about 8 feet high, on a pedestal 10 feet high. The base of the pedestal will be 6 feet square, and it is proposed that it should be surrounded by a single granite curb. The statue will be bronze, and the pedestal granite.

Mr. Pomeroy has visited Lisburn and considers the site in Market Square now occupied by the fountain the most suitable one for the statue. Mr. Musgrave, therefore, hopes that the Urban Council will agree to dedicate ground there as a site for the statue.

I may mention that if the Council accept Mr. Musgrave's offer the execution of the work will take about two years. The Town Clerk -- That's a very nice letter to get.


Mr. Hanna said Mr. Clarke knew more about the history of that matter than any other member, perhaps he would speak.

Mr. Clarke said that he had been cognisant for some years of Mr. Musgrave's intention to erect a statue to perpetuate the memory of General John Nicholson. Mr. Musgrave had mentioned the matter to him, and said he would leave instructions to his executors to have a statue erected, but he (Mr. Clarke) suggested that it was a pity Mr. Musgrave had not the statue erected during his lifetime. The matter came to a head when Mr. Pomeroy was over executing a statue of the Lord Mayor of Belfast, Mr. M'Mordie, and the result was that letter to the Council. Everyone knew that Mr. Musgrave was a Lisburn man, born in Lisburn, and that his father lived in Market Square. The monument would be a great ornament. It was a very nice offer, indeed, and he moved that the Council accept Mr. Musgrave's offer and return to that gentleman their most grateful thanks. (Hear, hear.) Regarding the site, he perfectly agreed that Market Square was the place for it. The fountain could be removed to some other site, to be arranged later.

Dr. St.George heartily seconded the motion. He had no objection to Market Square as the site; but it would not be nice to see old clothes and rags being sold at the feet of such a gallant soldier as General John Nicholson. It was because of the stalls in Market Square that the cannon which now graced Castle Gardens had been removed thither.

Mr. Clarke said he forgot to mention that he had interviewed Mr. Pomeroy and had seen a model of the proposed work. It was very beautiful indeed.

Mr. Hanna, in supporting the motion, said the offer was an event in the life of Lisburn, and characteristic of the Musgrave family. It always seemed to him that what Jerusalem was to the Jews, Lisburn was to the Musgraves.

The Town Solicitor said he was of opinion that the Council could legally grant the site mentioned.

The Chairman said Lisburn was under a great debt of gratitude to Mr. Musgrave. That last act of his was only in keeping with the traditions of the family, and Lisburn had every right to be proud of the name of Musgrave It would be nice to have a public statue of General Sir John Nicholson, who was looked upon as one of the greatest soldiers of the age in which be lived.

The motion was passed, and the Town Clerk was instructed to write accepting Mr. Musgrave's kind offer, and express the Council's grateful thanks.

"The Heroic Nicholson," as the men of his own generation loved to speak of him, was one of the outstanding figures in the Indian Mutiny. Born at Lisburn on 11th December, 1822, he was the eldest son of Dr. Alexander Nicholson, and a grandson of Mr. John Nicholson, of Stramore House, Gilford. His mother, Clara Hogg, of Lisburn, was a sister of the late Right Honourable Sir James Hogg, Bart., an ancestor of Lord Magheramorne. His father died of fever caught in the discharge of his professional duties in Dublin, and Mrs. Nicholson eventually returned to Lisburn. In his twelfth year John Nicholson was sent to the Royal School, Dungannon, and in February, 1839, he sailed for India, the scene of his great achievements and glorious death. The Nicholson memorial tablet in Lisburn Cathedral bears the following inscription, which was written by Sir Herbert Edwardes, the famous Indian General:--


The grave of Brigadier-General Nicholson, C.B., is beneath the fortress which, he died to take. This monument is erected by his mother to keep alive his memory and example among his country men. Comrades who loved and mourn him add the story of his life:-- He entered the army of the Honourable East India Company, in 1839, and served in four great wars -- Afghanistan, 1841-2; Satlaj, 1845-6: Punjab, 1848-9; India, 1857.

In the first he was an ensign; in the last Brigadier-General and a Companion of the Bath: in all a hero. Rare gifts had marked him for great things in peace and war. He had an iron mind and frame, a terrible courage, an indomitable will. His form seemed made for an army to behold; his heart, to meet the crisis of an empire; yet he was gentle exceedingly, most loving, most kind.

In all he thought and did, unselfish, earnest, plain, and true; indeed, a most noble man. In public affairs he was the pupil of the great and good Sir Henry Lawrence, and worthy of his master. Few took a greater share in either the conquest or government of the Punjab; perhaps none so great in both.

Soldier and civilian, he was a tower of strength; the type of the conquering race. Most fitly in the great siege of Delhi he led the first column to attack and carried the main breach. Dealing the deathblow to the greatest danger that ever threatened British India, most mournfully, most gloriously, in the moment of victory, he fell mortally wounded on the 14th, and died on the 23rd of September, 1857, aged only 34.


The late Field-Marshal Earl Robert in "Forty-one Years in India" wrote -- "Nicholson impressed me more profoundly than any man I have ever met before or have ever met since. He was the beau ideal of a soldier and a gentleman."

In the "Gazette" containing the list of honours conferred by Queen Victoria upon the heroes of Delhi, it was notified that Brigadier-General Nicholson, had he lived, would have been made a Knight Commander of the Bath.

(This article was originally published in the Lisburn Standard on 11 July 1919. The text along with other extracts can be found on my website Eddies Extracts.)
Posted by an extract of reflection at Thursday, July 11, 2013