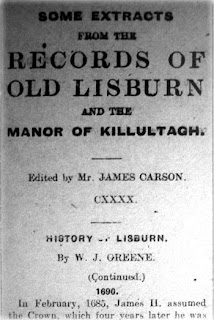 In February, 1685, James II. assumed the Crown, which four years later he was forced to abdicate; during those years Ireland became again the scene of war and bloodshed. The Duke of Schomberg, who had landed at Groomsport with an army of 10,000 men, detachments of which had been dispersed through different parts of Ulster, made Lisburn his headquarters, and for six months, he occupied the house nearly opposite the Castle Street entrance to the Cathedral, which had previously been occupied by Bishop Jeremy Taylor. A new dynasty was now at hand. Early on the morning of the 14th of June, 1690, bonfires blazed on the mountain tops of Down and Antrim, and special messengers were dispatched from Belfast to circulate the news throughout the country, that King William with his bodyguard and a large number of troops had arrived at Carrickfergus. He next proceeded to Belfast, and remained there several days. On the morning of the 19th of June the King and his followers left Belfast on their way to Dundalk. On arriving at Lambeg, and seeing a person standing at one of the cottage doors, King William, who rode at the head of the troop, inquired, in a language mixed with the French idiom, which of the roads led to Lisburn and Hillsboro'. Mr. Rene Bulmer (Boomer), to whom the question was addressed, replied in genuine French. Evidently gratified at meeting so unexpectedly a native of Gaul, his Majesty entered into a friendly conversation with him for several minutes, relative to his native place, and the circumstances that led to his exile, and after paying a very gallant compliment to the young and handsome wife of his informant, who had come out to see the soldiers, the Royal traveller shook hands with each of them and passed on to Lisburn with his troops.

When the troops reached Lisburn His Majesty rested some hours, and reviewed the different battalions stationed there. He dined with Captain Johnston, who was left in charge during the temporary absence of the Duke (who was on military duty in Belfast), at the house of William Edmundson, a member of the Society of Friends, whose house stood on the site now occupied by the local branch of the Northern Bank. A very interesting incident occurred at this time. The local Presbyterian congregation held worship in their tiny temple situated on the Moira Road, in the south end of the town. The pastor of the congregation was the Rev. Alexander M'Cracken, a high-class theologian who, with two other men of mark in the Presbytery, had some months before been deputed to go over to London with an address of welcome from the Presbyterians of lower Ulster to his Majesty King William. The journey by sea and land from Donaghadee to London in those days occupied three weeks, and the King was much gratified by the attention thus paid him. Mr. M'Cracken called on his Majesty in Lisburn, and was received with all the genial spirit that formed the social character of that great Monarch.

From Lisburn he proceeded to Hillsboro'; and in the evening he was waited on by a deputation, consisting of Rev. A. M'Cracken, pastor of Lisburn; Rev. Patrick Adair, of Belfast; Rev. A. Hamilton, of Armagh; and other ministers of the Presbyterian Church. Having learned from those gentlemen more than he had previously known of the state of the Church and the poverty that existed among many sections of its people, he promised to increase the amount of the Regium Donum to the sum of twelve hundred pounds; and, promptly acting on that impulse, he wrote an order for the first year's annuity. Amongst the many interesting association that cling round the walls of the old Hillsboro' Castle then may also be seen the bedroom occupied by King William during his sojourn in that old town.

When the country had settled down after the stormy days of the Revolution, till the latter part of the eighteenth century, the energies of the inhabitants of Lisburn seem to have been mainly directed to the development of the different branches of the linen industry. Under the fostering care of the Crommelins, the Delacherois, the Richardsons, the Barbours, the Coulsons, and many others, its manufacture reached a degree of excellence that had never been attained before. During the short reign of William the Third, who died in 1702, every encouragement was given by him to those who were interested in the linen trade. He granted a large sum to Mr. Crommelin to enable him to develop the cultivation of flax and the weaving and bleaching of linen. Colonel Popham Seymour-Conway also granted that gentleman a valuable plot of ground near the County Down Bridge, where he built his weaving factory, and members of the French fugitives found employment there.

A serious calamity befell the inhabitants of Lisburn (as it has since been celled) by the total destruction of the town by fire, which happened accidentally. The Cathedral was burned, and also the Castle built by Lord Conway.

All that now remains of that ancient stronghold is the surrounding wall and its ancient gateway with the date, 1677, engraven on its topmost stone. A portion of the ground adjoining the walls is still called "The Rounds," from the time the watchful sentries walked their "weary rounds" to prevent old Lisnagarvey from being surprised by the enemy. In a house occupied at that time by a Mr. Ward, and now in the occupation of Messrs. Duncan & Sons, Ltd., which was the first one erected after the fire, a stone is inserted in the front wall, which bears this inscription:--

I.H.I., 1708.
The year above this house erected,
The town was burned ye year before:
People therein may be directed --
God hath judgments still in store,
And that they do not Him provoke,
To give to them a second stroke,
The builder also doth desire at expiration of his lease,
The landlord living at that time may think upon the builder's case.

Better class houses were afterwards erected and have been occupied at different times by the families of Traills, Calbecks, Smyth, Bolton, Richardson, Hogg, Cupples, Stannus, Nicholsons, Pim and Barbour, the descendants of whom are still in the neighbourhood.

About the beginning of last century Robert Knox, a Scotch cutler, settled in Lisnagarvey, the linen weavers then used an awkward instrument called a "shears" for the purpose of cutting the ends of their warp yarn, and also for dressing the selvages of their cloth. Mr. Knox was often called upon to sharpen and repair those instruments, and while doing so he began to see that much improvement could be made in their form and usefulness. Acting on this idea he produced something new and the article rapidly found favour with the weavers of the neighbourhood. But the fame of Knox's shears did not end here. Orders came in from other provinces, and at length the cutlers of Manchester and York made purchases to such an extent that long before the old gentleman's death he could not meet the demand for his work.

His son and grandson inherited the fame he had gained for himself, and some of the present inhabitants still remember when the latter carried on his useful business. There was also an ingenious person named Kelly, who became such an adept in the making of mounted shuttles that the name "Kelly" stamped on each shuttle proved a guarantee that the work came from the hands of a master of the art. Mark Henry Dupré, one of the Huguenots, was also renowned as a maker of reeds.

The then Marquis of Hertford granted leases of his whole estate for three lives, or forty-one years, at from two to five or six shillings an acre, which proved a great incentive to the improvement of buildings, planting orchards, and cultivation of the land generally, and the prosperity of its inhabitants. In 1762, his successor was appointed Lord Lieutenant of Ireland, with Viscount Beauchamp, his son, acting as Chief Secretary. During his reign at Dublin Castle, Lord Hertford rendered valuable services to the linen trade, and was a liberal patron of the damask manufactory which was some time after established at Lisburn. The industry was started in Lisburn by the Messrs. Coulson, and the production of their looms is celebrated over the civilised world. The factories have been visited at different times by many distinguished personages.

On the 11th May, 1762, Mr. John Williamson, a bleacher, of Lambeg, had a bye-law passed by the Trustees of the Linen Board, that all brown linens should be sealed so as to certify that each webb was of the proper length, breadth, and workmanship.

Under the erroneous impression that he was the foe of the work-people, the malcontent weavers determined to wreak their vengeance on that gentleman. With this intention three or four hundred of them paraded the streets of Lisburn, armed with blackthorn sticks, and railing in opprobrious terms against Williamson. For the time being business was partially suspended in the town, and the sale of webs in the Linen Hall was given up for the day. The mob failing to meet the object of their vengeance went off to Lambeg House, the seat of Mr. Williamson, and on arriving there smashed the windows and destroyed some valuable furniture: Lord Hillsboro', who was also in sympathy with Mr. Williamson, having heard of the riotous proceedings, rode immediately into Lisburn, and placing himself at he head of a troop of soldiers then quartered in the town, set off for Lambeg and routed the mob. On returning from thence, and after the soldiers had gone back to the barracks, his Lordship was attacked in the street, and might have been roughly handled by the half drunken fellows, had it not been for a number of Maze farmers and Lisburn men who came to the rescue, and the noble earl escaped further attempts at violence. In 1784, Mr. John Barbour erected at Plantation a Linen Thread Manufactory, farther reference to which will be found under the industries of Lisburn. In 1789, a Mr. Wallace erected a Cotton Mill in a court off Castle Street, Lisburn, and had the concern filled with the most modern machinery. Having heard much of the discoveries of Watt and Boulton in steam power, he accordingly set off to Glasgow to examine the principle.

Being convinced of its superiority, he purchased a fifteen horse-power engine, engaged competent mechanics to set it up, and returned home. After overcoming many preliminary difficulties at length all the arrangements were completed, and Mr. Wallace enjoyed the triumph of seeing the first steam engine that ever whirled in the North of Ireland driving the spindles of the Lisburn Cotton Mill.


(This article was originally published in the Lisburn Standard on 4 July 1919 as part of a series which ran in that paper each week for several years. The text along with other extracts can be found on my website Eddies Extracts.)
Posted by an extract of reflection at Thursday, July 04, 2013