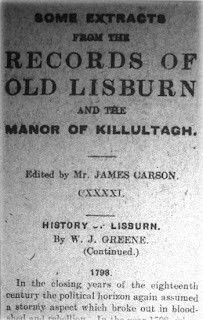 In the closing years of the eighteenth century the political horizon again assumed a stormy aspect which broke out in bloodshed and rebellion. In the year 1798, when many valuable lives of men were sacrificed, who with misguided zeal tried to ameliorate the condition of political injustice from which, they believed, their countrymen suffered by the oppressive laws of the English Government. The Volunteer Movement started about the year 1745, when the Scottish Highlanders threatened a descent on the North of Ireland. A meeting was held at the Donegall Arms, Belfast, and resolutions were passed for the defence of the coast. Soon after numbers of patriotic men offered their services from different parts of the neighbouring counties to join the Belfast men in repelling the invaders; but the great epoch of the Volunteers commenced in 1778, when suspicious-looking warships frequently visited the coasts of Antrim and Down. On the 27th March a meeting was held in Belfast. On that occasion it was resolved that the young men capable of bearing arms should enrol themselves in companies for the defence of their country against foreign invasion. Considerable enthusiasm was aroused by this movement and great stimulus was given to it in consequence of the famous American Paul Jones arriving in his frigate, "The Ranger," in Belfast Lough and attacking the English sloop of war, "Drake," sonic days afterwards. The "Drake" was disabled, and her Commander, Lieutenant Dobbs, a Lisburn man, lost his life during the engagement -- a tablet was afterwards erected to his memory in Lisburn Cathedral. Some years after the Volunteers were enrolled they began to use their power for political purposes and the repeal of certain laws which they believed, bore unjustly on the commercial and religious life of Ireland. On the 11th March, 1793, a proclamation for disarming the Volunteers was issued from Dublin Castle which caused great indignation against the Government, and ended in martial law being proclaimed throughout Ireland.

In March and October of the year 1791, meetings were held to carry out the idea of uniting Irishmen of all creeds and classes in one commas bond for the purpose of seeking a more equitable adjustment of constitutional laws -- thus arose the United Irishmen. During those troublesome times Lisburn became once more the centre of excitement and bloodshed. The Rev. Philip Johnston, of Ballymacash House, who, in the exercise of his magisterial duties, became so unpopular with the United men that at length, they conspired to take away his life. Several unsuccessful attempts were made for that purpose, and on a special occasion the intended victim escaped by the timely influence of one of the United Irishmen; but on the night of Saturday, the 8th of October, 1796, when leaving the house of a Lisburn friend with whom he had spent the evening, and as he was in the act of mounting his horse to proceed home, a man who had concealed himself behind the opposite wall, started up and fired a loaded pistol at the reverend gentleman, inflicting a slight wound on his left shoulder. Considerable indignation was aroused in Lisburn and the surrounding neighbourhood. Public meetings were held, and a public subscription list opened, which ended in a reward of one thousand pounds being offered for bringing the offender to justice; but even that large sum failed to bring out the least information on the subject. On the 23rd October, 1796, the Habeas Corpus Act was suspended, when soon after a number of merchants in Lisburn and other places were arrested on the charge of high treason. From 1796 to 1798 Ireland drifted steadily into the whirlpool of civil war. During those years the regular business of the country was neglected for the clandestine manufacture of arms and pikes that were to be used in the coming struggle. During the winter of 1797 and the following spring a Lisburn Whitesmith forged upwards of five hundred pikes, besides attending to his ordinary work.

The linen markets of Ulster were at this time attended by great numbers of buyers, and of these gentlemen none were more respected than Harry Munro, of Lisburn. He had been a member of the Lisburn Volunteers at the time of their disbandment, and afterwards joined the United Irishmen. He was a member of the Episcopal Church, a regular attender of the Sunday services at the Cathedral, and was highly respected by the rector and his curate.

In the month of May, 1798, preparations were made by the United men to take the field against the Government troops. The member who had been appointed to lead them declined at the last moment to act as commander, and on the night of Saturday, 9th June, a Belfast lawyer (legal adviser of the Society) called on Henry Munro, at his residence in Market Square, Lisburn. The attorney reported the refusal of the man who was appointed commander to take charge of the national army, and said that their only hope was that Munro would accept the command. At no period before this had Monro contemplated taking the field against the Royal troops, and, looking upon the call as a matter of honour, he accepted it without considering the magnitude of the responsibility he was about to undertake.

The Battle of Ballynahinch was fought on Wednesday, 13th June, and, as is well known, the insurgents were completely routed, and fled in all directions. The unfortunate general was among the last to leave the field. For several hours he roamed about the country, till early on Thursday morning he reached a farmhouse, and sought shelter there. Here he remained concealed for nearly two days, receiving great attention from his kind, hearted host. On Saturday morning, when dreading vengeance for concealing an outlaw, he told Munro that before daylight he must seek some other refuge. Munro set off, and at length ventured to take refuge in a small farmstead on the borders of Dromore, Co. Down. Here he met a man, to whom he offered £5 (all the money he had in his possession) and a small parcel of shirts if he would conceal him for a few days, until the Government offer of pardon to all rebels who gave up arms should be issued.

The man took the money, and offered to shelter the fugitive, but instead of doing so, he went to Hillsboro' and told the yeomanry of having Munro concealed in an outhouse. A guard immediately was sent with him, and the unfortunate Munro was taken prisoner, handcuffed, brought into Hillsborough, and thence to Lisburn, where he was confined for the night in a temporary prison. When his friends learned of his arrest the utmost sympathy was shown for him. His clothes were torn, and his health had suffered much from the fatigue he had undergone. Mr. George Whitla, a local cotton manufacturer sent him a full suit of clothes, while the rector, Rev. Dr. Cupples, who resided within a few doors of the guard-house had his meals regularly carried to him from the Rectory during the period of his confinement. On Monday, 17th June, the trial came on before a court-martial composed of officers belonging to the several regiments then quartered at Lisburn Barracks and Blaris camp. Only three witnesses were examined for the Crown, and the deposition that the prisoner had led the native troops at the recent battles being conclusive, the sentence of death was at once written out, and Henry Munro was ordered for execution.

The culprit was immediately informed that he had not long to live, and was told to make speedy preparation for the death that awaited him. At four o'clock Monro was brought out under a strong military guard. He begged to be allowed to go into the house of the Rector in order to receive the Sacrament. The request was granted, and, after partaking of the sacred rite, the procession again commenced, and the place of execution was reached, where a temporary gallows had been erected, nearly opposite the woollen drapery concern of which Munro was the proprietor. Monro exhibited perfect coolness without putting on the slightest bravado. While standing at the foot of the gallows he sought leave of the officer of the guard to speak to friend who lived near. Permission was granted, the friend sent for, and the soldiers thoughtfully stood back during the short conference. What he said on that occasion was never known, even by the nearest relation of the friend to whom he told it. After a short prayer he stepped on the ladder, when one of the steps gave way, and he fell. Recovering his balance in a moment, although having his arms firmly pinioned, he said "all right." On the ladder being adjusted, he went up with the rope round his neck; the ladder was removed by the executioner, and in a few moments all was over. As the body swung to and fro a low wail of sorrow told how bitterly the tragic end of their fellow townsmen was felt by the multitude that thronged the place of execution. Although his conduct was looked upon as that of the wildest and misguided patriotism, his political opponents, as well as his personal friends, mourned sincerely over the sad fate of the man whom every one respected as a worthy and amiable citizen. When the body had been taken down, the final vengeance of the law was carried out, orders having been given that the body should be decapitated, which was done, the hangman holding up the severed head and crying out "there is the head of a traitor." Three other men were hanged in Lisburn about the same time -- Dick Vincent, Geo. Crabbe, and Tom Armstrong, who suffered death on a lamp-post at the corner of Castle Street, opposite the market house. The heads of the four men were stuck on spikes, and placed at each corner of the market house.

Henry Munro's mother lived in Lisburn for many years after his death, and supported herself respectably by keeping a little shop, situated on the Sluice Bridge, in Bow Street. She survived the death of her son about seventeen years.

(This article was originally published in the Lisburn Standard on 18 July 1919 as part of a series which ran in that paper each week for several years. The text along with other extracts can be found on my website Eddies Extracts.)
Posted by an extract of reflection at Thursday, July 18, 2013