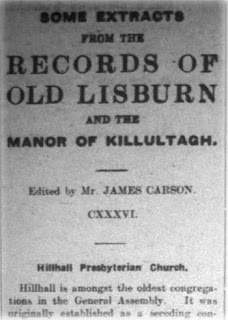 Hillhall is amongst the oldest congregations in the General Assembly. It was originally established as a seceding congregation by a few worthy Scotsmen, who settled in Lisburn about the year 1740 -- via., Snodgrass, Bittle, Patton, and Waddell. These were joined by M'Neice, M'Kee. and others from Drumbo, and by Clarke, Reid, Frazer, and M'Knight, from Largymore. After forming themselves into a congregation, they met for worship somewhere in Chapel Hill, Lisburn.

In a short time after their formation they deputed two of their number to proceed to Scotland and solicit ministerial assistance from the Associated Presbytery, over which the Rev. Ebenezer Erskine then presided as Moderator. When the deputation presented their memorial it was favourably received, and ministerial aid was sent regularly to the newly-formed congregation in Lisburn.

After worshipping for some time in Lisburn, and failing to obtain a site for a church in the town, they accepted the generous offer of a Mrs. Law, of Hillhall, to build a church in one of her fields, choosing the site on which the church stood that has recently been taken down, in order to erect the present handsome and substantial structure. The first church was a long thatched house, with a door at either end, and one to the middle, with an earthen floor. The church was rebuilt in 1896. the Rev. S. Dunlop being minister; it was afterwards enlarged in 1868, the Rev. J. D. Crawford then officiating.

The farm of ten acres on which the Manse is erected was a gift to the congregation made by a Mr. Ross shortly after it was formed.

The first minister was Rev. Mr. Greer, who was succeeded by the Rev. James Hume. The Rev. Mr. Bell succeeded Mr. Hume, and after him came Mr. Hunter, ordained on 1st March, 1796. On the 25th August, 1825, the Rev. Samuel Dunlop was ordained to succeed Mr. Hunter. After Mr. Dunlop came the Rev. J. D. Crawford, who was installed March 29th, 1866. Mr. Crawford was released from the charge of Hillhall in May, 1881. on his accepting a call to Albert Street Church, Belfast.

The Rev. Robert Robson was installed by the Synod of Belfast on 2nd July, 1883. He officiated until his death on 12th October, 1906, and through his instrumentality the handsome new church, opened in August, 1903, has been erected. It contains memorial windows to the late J. D. Barbour, D.L., and Rev. S. Dunlop, a former pastor. There is also a National School, recently erected at a cost of £600, convenient to the church, of which Mr. Hunter, B.A., is principal and Miss Cupples assistant.

Mr. Robson was succeeded by the Rev. Gilmour Neill who was ordained to the pastoral oversight of Hillhall congregation on May 8th, 1907. Mr. Neill demitted his charge in May, 1913, having accepted a call to St. Andrew's Church, Portsmouth. He acted as chaplain to his Majesty's Forces throughout the war, serving first at Portsmouth and later in France. He was wounded in June, 1918.

The Rev. William M'Nutt, B.A.. the present pastor, was installed in Hillhall on August 13th, 1913, In 1915 he received a chaplain's commission in the army, and served in Gallipoli, taking park in the landing at Suvla Bay. Invalided home, he afterwards rejoined, and served in France and Belgium till the close of the war.

The original portion of the present church, with the exception of the tower, was built through the instrumentality of the Rev. Alexander Orr, in 1849. It is generally understood that the church of Lambeg is on the site of an older foundation. In Lewis' Topographical Dictionary we read: "Lambeg church occupies the site of an ancient monastery said to have been founded in the 15th century by MacDonnell for Franciscan friars of the third order. From a part of the churchyard being called the 'Nuns' Garden' it has been supposed that there was a nunnery here.

The church contains mural tablets in memory of Jonathan Richardson Glenmore; George M'Comb, Lambeg; and windows to the memory of Bishop Mant and J. D. Barbour, D. L. Conway. The church was served in modern times from Lisburn, as in the churchyard is to be found the tombstone of the Rev. Saumarez Dubourdieu, for fifty years officiating clergyman of Lambeg and of the French Protestants in Lisburn.

The earliest record preserved of this ancient church is a register of baptisms, marriages, and burials 1696-1778. In 1648 the church was almost destroyed during a battle between the Royalist forces and the Scots, but was afterwards rebuilt. Till 1750 the roof was of shingles. The old church was enlarged, 1813, giving accommodation for about 450 persons. The present new church was consecrated in 1872, and it is interesting to note that the flagon, chalice, and patten, of solid silver, bearing the date 1768, are still in use. The Rev. John Goyer, 1709-1738, was the first vicar whose name appears in the parochial records. Rev. Philip Johnston, vicar, 1772-1833, of Ballymacash House, reference to whom has been made, in our general history. Rev. Thomas Thompson was vicar 1836-1858. Rev. Henry Stewart, father of the Rev. Joseph A. Stewart, of Killowen, was vicar from 1858-1872. Rev. S. M. Moore, 1872-1898. The present vicar is the Rev. Charles E. Quinn, B.A.; curate till his death -- Joseph A. Stewart, M.A.; churchwardens, 1906 -- E. J. Charley, J.P.; Robert M'Henry: select vestry -- W. J. Boomer, Ed Sinclair, T. Brice, Joseph Waring, John MacHenry, William Boomer, R. Brown, W. MacHenry, W. MacHenry, jun.; John Waring, Hugh Torney, and Joseph Mills.

In April, 1892, a chapel of ease, recently named St. Mark's Church, was opened at Ballymacash for the convenience of the parishioners who reside in that part of the parish. Rev. Joseph A. Stewart generally officiates in the church.

During the latter part of the 18th century education seems to have been in a flourishing condition in Derriaghy. Some records of the year 1794, kept in the parish church, show there were then four schools in the district. Very little more is known about the progress of education until the year 1830, when a fine schoolhouse was built adjoining the church. This school was under the control of the Church Education Society. In the year 1888 a very fine schoolhouse was erected by the Charley family, in memory of the late Miss Mary Charley, and presented to the parish. The schools were in the same year taken into connection with the National Board. The growing needs of the parish necessitated the building of a new infant school, and in the year 1897 this was accomplished. There is also a school at Ballymacash, originally build in 1790, by Rev. Philip Johnston, and afterwards rebuilt in 1833 by E. Johnston, Esq. This school has been conducted for a considerable time under the National Board Manageress, Miss Johnston, Ballymacash House.

(This article was originally published in the Lisburn Standard on 6 June 1919 as part of a series which ran in that paper each week for several years. The text along with other extracts can be found on my website Eddies Extracts.)
Posted by an extract of reflection at Thursday, June 06, 2013