The Clergy of Magheragall Parish (pt2) 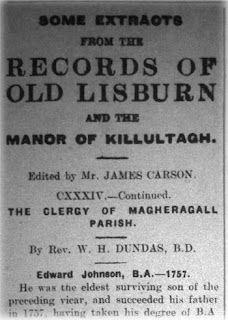 THE CLERGY OF MAGHERAGALL PARISH.

He was the eldest surviving son of the preceding vicar, and succeeded his father in 1757, having taken his degree of B.A. in 1755. He died at Lisburn in 1765 in the 30th year of his age, and was buried at the east gable of the church in the churchyard of Magheragall.

This vicar was also connected with the Ballymacash family, having married in 1761 Henrietta Johnson, eldest surviving daughter of Rev. Thos. Johnson. He was the son of Lieut. Henry Reynett, and was born at Sandhills, Co. Monaghan, in the parish of Galloon, in 1736. His name appears once in the Magheralin Vestry Book as signing the minutes of the Easter Vestry in 1766 -- "Hen. Reynett, minister." Perhaps he had been curate there before his appointment to Magheragall in 1765.

He became vicar of Glenavy in 1777, where he was succeeded by Rev. Samuel Dubourdieu in 1780. He then was appointed vicar of Billy, which he resigned in 1790. There is a fine oil portrait of him at Ballymacash. He belonged to a Huguenot family, which settled in Waterford -- possibly Henry Reynett and Susan Taboys, whose marriage licence is dated 1726, were his parents. Doctor Jacques Reynette as a boy fled with his father, Henri de Renet, from Languedoc in France at the outbreak of persecution. The family estates were restored in later years to a senior branch. Doctor Jacques Reynette was buried in 1720 in the French Church at Waterford.

This vicar only held Magheragall for about a year. He went to Aghalee in 1778, where he was vicar in 1818, and probably to 1834, when Rev. Robert Hill was appointed. Possibly he was the son of Rev. Philip Fletcher, who was rector of Dromore and treasurer in 1736.

Rev. Francis Patten, vicar for 47 years, was a son of Rev. Wm. Patten, who is described as "of Dublin," but who may have lived in this neighbourhood, at Knockmore is mentioned in his will. The family of Patten had settled in Drogheda, where Francis' grandfather, William, was an alderman, and his great grandfather, also William, a barrister. Probably one of those was the William Patoun, Mayor of Drogheda, prominently mentioned in connection with what was called "The Drogheda Case." (Reid History of the Presbyterian Church, vol. ii. p. 4 foll.)

This Irish branch of the Pattens is said to be descended from the brother of William Patten, of Waynflete, Lincolnshire, who founded Magdalen College, Oxford, in 1458. Rev. Francis Patten's eldest brother Joseph lived at Knockmore -- this house got the reputation of being haunted, and is now a ruin. Another brother, Thomas, lived at Rosevale: a third, William, married the daughter of Attorney-General Wolfe, of the same family, to which the famous General Wolfe, the victor of Quebec belonged. The daughter of another brother, John, was married to Thomas Addis Emmett, brother of Robert Emmett; and a fifth brother, James, before his marriage sailed round the world with Captain Cook in H.M.S. Resolution. With the curiosities he brought home he helped to found a museum in T.C.D. The foregoing particulars were contributed by his great granddaughter Miss Jenkins.

Rev. Francis Patten lived at Streamville, and evidently held extensive lands. In a list of farms in Magheragall in 1778 he appears as occupying 52 acres in Upper Magheragall, as well as about 52 acres contiguous to Greerstown. He had a private walk to the church which entered the graveyard opposite the old vestry door by what was known as "Mr. Patten's green gate." He married Rebecca Higginson, and had one son, James, who was an officer in the Brookhill Yeomanry Corps of Infantry. His grandson, James Patten, M.B., LL.D., was one of the early inspectors of National Schools. He died at Streamville in 1869, and bequeathed a legacy of £3,122 for the poor, sick, and infirm of Magheragall.

Rev. Francis Patten wrote an account of the parish for Mason's Parochial Survey in 1813, which is not in the published volumes of that work. In it he says, "I have possessed the parish for 35 years, and 45 years in the Church." It does not yet appear where his previous ten years of ministry were spent, but it is curious that he signed the Easter Vestry minutes of 1772, 1775, and 1777 before he became vicar. He also writes of the education of the children as follows:-- "There is no endowed school, but three schoolhouses, built by private subscription, and other ones held in barns in summer by masters at very small salaries, and scholars very numerous, especially in a Sunday school lately encouraged in the parish, which, I think, is attended with good effects, as it keeps the young people of the community out of mischief, which generally follows from idleness." To this latter there is a reference in the minutes of the Easter Vestry of 1812 -- "To George Greer, for keeping a Sunday school, £2 5s 6d." Elsewhere he mentions "a good house belonging to Mr. John Sedgefield, near the church, where his son-in-law, Rev. Skeffington Thomson, keeps a good classick school." This house, a fine one, said to have been built in the time of Cromwell, stood on the site of Brookmount, now the residence of Mr. R. G. Hill.

He was also a Scholar of T.C.D., 1819, and must have been a curate in the South of Ireland, as he was ordained priest at Cloyne in 1825. He was a relative of Dr. Mussen, of Glenavy, was married to Henrietta Garrett, of Magheragall, and lived in the cottage which formerly stood on the site of the new graveyard. During his time the present church was built in 1831. From Magheragall he removed to the parish of Kilmore, Co. Down, in 1846, where he died in 1866, aged 68. He was a diligent worker, especially among the children, and is said to have instituted daily services at Kilmore, which were not appreciated by the people. He was buried within a railing in the north-west part of the graveyard, close to the railing round his predecessor's grave, but in neither case is there any inscription.

He was ordained in 1824, in which year he appears as minister of Ballycastle, Co. Antrim, and became perpetual curate of Ballyeaston in 1827, from which he came to Magheragall. He was appointed rector of Tickmacrevan or Glenarm in 1851, which he held till 1872. Mr. Courtenay lived in Castle Street, Lisburn, and had as curate Rev. Robert Mussen, who is said to have been the first curate of the late Primate Alexander.

Mr. Courtenay, whose wife was the sister of Lord Chancellor Brady, got the standing of the incumbent altered from that of vicar to that of rector. A note in the minute book reads thus: "It is here recorded that after the demise of Bishop Many, of this diocese, in Oct. 1848, a memorial was presented to the the Privy Council in Dublin by the vicar, D. C. Courtenay, representing the very small income of the parish, and praying that the rectorial rent might be separated from the Episcopal revenues, to which the Privy Council granted a favourable reply, constituting the parish into a separate and distinct rectory, so that the vicar henceforth becomes the rector, to whom is now payable the rent of rectorial lease made by the late Bishop and renewed in 1847 to Thos. Johnson, Esq., of Ballymacash, and at the termination of this lease the entire rent charge, rectorial and vicarial, will become payable to the future incumbent." But the Disestablishment and Disendowment Act changed all these happy prospects for the rectors of Magheragall!

The following notes were found among the papers of an old parishioner, Isaac Greer -- "1851, Sept. 7. Mr. Gibs' first service in the church," and 1852, May 16. Mr. Falloon preached his first sermon in Magheragall; his text was from Matthew 22 ch. 42 v., 'What think ye of Christ?'" It would appear then that Mr Gibbs was in the position of minister for a few months, but his name does not appear in the vestry book. He was ordained in 1835, and became rector of Hillsborough in 1869; he was also Archdeacon of Down.

He had been curate of Annahilt in 1826, and, after a short stay at Magheragall, was appointed rector of Ballynure in 1852, where he died in 1872 aged 74 years. There is a tombstone to his memory at Ballynure, and also a mural tablet erected by his daughter.

Rev. M. M'Kay was a Scholar of T.C.D. 1824, LL.D. 1835, and had been engaged in educational work before his appointment to Magheragall. He was master of Carrickmacross Grammar School from 1834 to 1841, of Drogheda Grammar School from 1841 to 1850, and edited some Orations of Cicero for use in schools. During his incumbency the present rectory was built about 1856; there had previously been no residence provided for the minister.

Dr. M'Kay was naturally anxious to improve the position of education in Magheragall, and he put the parochial school under the National Board. But this action was greatly disliked by the people, and raised such a storm of opposition that it had to he removed from the list of National Schools, and many years elapsed before it was again put under the National Board.

He had two sons, Rev. Maurice Knox M'Kay, incumbent of St. Matthew's, Broomhedge, at whose house in Blaris he died in 1871; and Rev. Charles Elrington M'Kay, rector of Inver, Co. Donegal.

Rev. Edward Mockler graduated in T.C.D. in 1836. His grandfather had been Archdeacon of Cloyne. Before coming to Magheragall he had been curate in Ballinderry in 1839, in Skerry and Rathcavan (1840), and in Killead from 1841. After 31 years of ministry he resigned the parish in 1894, and died on 10th October, 1894, aged 82 years. He also is buried in the N.-W. portion of the churchyard, where a monument is erected. There it also a mural tablet in the church.

Rev. Dr. Walker was ordained in 1886 for the curacy of Ballymena; became curate of St. James' Belfast in 1889, and rector of Magheragall in 1894. During his incumbency many important improvements were effected in the parish. The chancel was added to the church and the interior was entirely renovated; a large addition to the churchyard was provided and the schoolhouse was enlarged. In 1906 he was appointed to St. Barnabas' Parish, Belfast, and is now rector of St. Matthews', in the same city. He was succeeded by

who had been a Scholar of T.C.D. (y894),[sic] like six of his predecessors in the paris, and was ordained in 1898 for the curacy of St. Thomas', Belfast. He is the author of various articles in Hastings' "Dictionary of Christ and the Gospels," and "Dictionary of the Apostolic Church," also of "Enniskillen -- Parish and Town."

(This article was originally published in the Lisburn Standard on 30 May 1919 as part of a series which ran in that paper each week for several years. The text along with other extracts can be found on my website Eddies Extracts.)
Posted by an extract of reflection at Thursday, May 30, 2013