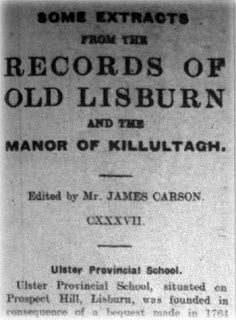 Ulster Provincial School, situated on Prospect Hill, Lisburn, was founded in consequence of a bequest made in 1764 by John Hancock, a member of the Society of Friends, and a resident in Lisburn. By his will he bequeathed the sum of £1,000 (Irish currency) to the care of four trustees, for the purpose of purchasing lands. With the yearly rents and profits from those lands the trustees were to establish a school within the bounds of the Lisburn Monthly Meeting of Friends for the education of the children of members of that Society. His will also left directions for the reception of one boarder, who was to be trained as a schoolmaster. In June, 1766, Francis, Earl of Hertford, granted a lease to the aforesaid trustees of 20 acres of land for the purpose of building the said school. This lease was renewable for ever under certain conditions. John Hancock's will had expressly stipulated that no part of the money left by him should bo used for building purposes, and it is evident that owing to these stipulations difficulties arose in carrying out his bequest. As a consequence, subscriptions amounting to £1,300 were raised among the Friends of England and Ireland, and with this the original building was erected on the lands leased from the Marquis of Hertford. In 1774 this building was opened as a boarding school for the children of the Friends. Its first head master was John Gough. His "History of the People called Quakers," in four volumes, written while he was head master of the school, and published in Dublin, by Robert Jackson, in 1789, is one of the standard authorities on this subject. He also published an arithmetic, which for a large number of years held its position as a standard text book in Irish schools. John Gough died in 1791, and for some time the school seems to have been very small.

In 1794 the building was considerably enlarged, and the management placed in the hands of a committee appointed by the Ulster Quarterly Meeting of the Society of Friends. It has continued practically under the same management up to the present day. One-third of the Managing Committee retire each year, but the retiring members are eligible for re-election. Large legacies and donation's come to it at various times, and considerable funds were raised for its support among the Friends, not only of Ulster, but also of Leinster, Munster, and England.

From 1794 to 1875 there was little change in the educational arrangements of the school. The object aimed at was to give a sound practical English education, calculated to prepare the pupils for business and commercial life. Throughout its history very special stress has always been put upon the moral training of the pupils.

Records seem to be wanting of the gentlemen who acted as head masters of the school, from the death of John Gough, in 1791, to the appointment of the late Joseph Radley, in 1875. With him the school entered upon an era of prosperity, which has continued with little intermission up to the present day. With Joseph Radley's advent the education became rather more liberal in character. In the 25 years during which he was head master the school made great strides. In 1878 the committee built the handsome front and wings, and in 1894 a fine dining-hall and gymnasium, and improved dormitory accommodation were provided. Four years later a splendid swimming bath was erected, to which a heating apparatus for the water has been added.

Up to about the year 1880 the pupils admitted to the school had been exclusively Friends. It was decided, however, that its doors should be opened to receive children who were members of other denominations, and the proportion of these in the school has steadily grown.

In the year 1900 Joseph Radley retired, and W. D Braithwaite, B.A. (Lond.), B.Sc. (Lond.), was appointed head master. Extensive changes were at once made in the curriculum and educational equipment of the school, so as to bring it into line with appeared principles of modern education, and the school definitely took its position among the principal educational establishments in Ulster. The education given was widened and deepened so as to enable its pupils to pass from the school to the university, or into the professions which do not need a university training.

The site is bracing and healthy, overlooking the valley of the LAgan, and in a favourable day the view from its windows includes the Mourne Mountains in front and the Divis Hills behind. The playing fields are very extensive, including two large football fields and a cricket field for the boys, and a hockey field and tennis ground for the girls.

W. D. Braithwaite retired in 1910, and later conducted a school in Yorkshire. He was succeeded by John Ridges, M.A., of St. John's College, Cambridge, who had been head master of Leighton Park School, Reading, a school of the Society of Friends.

After a brief period the school was reorganised so as to come within the supervision of the Intermediate Board of Education for examination and inspection purposes and reap the advantages of all the various aids granted by the State for public secondary education.

Technical work in science and drawing has been supplemented by similar work in manual instruction and domestic economy, These two latter subjects are placed in the hands of the expert teachers of the Lisburn Municipal Technical School. The boys are taught wood and iron work, and the girls needlework, cookery, and hygiene in that well-equipped modern school.

The girls' side steadily increased in number up to 54, and the number of girl boarders reached the record of 31 in 1919, the total number of boys and girls amounting to 100. This was the number aimed at by Joseph Radley at the time of the enlargement of the school.

The County Antrim Infirmary was established at Lisburn in the year 1767, pursuant to Act of Parliament. This act allowed the governors to take or receive lands not exceeding £200. the infirmary is supported by private subscriptions and county presentments.

One of the earliest surgeons was Dr. Dennis Kelly, who died in 1777; another was Dr. Stewart, a well-known physician, he was succeeded by Dr. William Thompson, who for nigh half a century occupied the post. The present surgeon, Dr. StGeorge, has now, in 1919, for over 33 years held the position with great success. Since the appointment of Dr. St. George there have been many alterations and improvements effected, and with the installation of the X-rays in the operating room -- a gift of the Barbour family -- electric lighting and a lift, it is now well equipped with all modern appliances.

This is a beautiful and stately building standing convenient to the Magheraleave Road about a quarter of a mile from the town. It was erected to the memory of the late William Thompson, M.D., surgeon, to the County Antrim Infirmary for upwards of half-a-century. The cost of erection and endowment was borne by his widow, his daughter (Mrs. Bruce), and son-in-law, James Bruce, Esq., D.L. It was opened in 1885, and has ever since been a great boon as a home for aged and incurable people of both sexes, where they are provided in their declining years with every necessary comfort.

This News Room was established about 1838, and met in the Assembly Rooms. It continued there for a very considerable time until circumstances arose that caused its removal to a room in Market Square. It continued there until the place was pulled down and re-built by Messrs. Todd Bros. They then removed to a room over the surgery of the late Dr. Kelso, and subsequently, after the re-building of their former domicile, they returned to the premises, over Messrs. Todd's shop. The minutes containing the records of the room during those years in a most interesting history of many of the important events happening in Lisburn during this portion of the 19th. century. After the withdrawal of the News Room from the Assembly Room, a new organisation was formed called "The Conservative News Room," and this institution existed down to the re-building of the Assembly Rooms, which was completed in the year 1889. An effort was then made by the members of the Lisburn News Room to be re-instated in their old habitation on a larger and more generous basis, and the whole history of the Room was put before Sir Richard Wallace, who, after mature consideration, decided to grant the room at a nominal rent to the old Lisburn News Room, to be managed as a non-sectarian and non-political news room. At the first meeting Mr. G. B. Wilkins was elected secretary, and acted till his death. The room is equipped with two splendid billiard tables, a fine selection of papers, periodicals and magazines, chess, draughts, &c., and at one time a very good library. Besides the large room the committee secured a small room adjoining, which was formerly called the Workingmen's News Room. This is used as a reading-room. The treasurer is Mr. Thomas Malcolmson, manager of the Ulster Bank, and the secretary Mr. D. Barbour Simpson.

The Temperance Institute was erected by the Lisburn Temperance Union in the year 1890. The foundation stone was laid by Mrs. John D. Barbour.

The late Sir Richard Wallace, Bart, gave the site free. The cost of the buildings and furnishings was about £3,500. Of this amount the late James N. Richardson, Esq., of Lissue, first president of the Temperance Union, generously contributed upwards of £800, and collected from his friends about an equal amount. The late Rev. Joseph A. Stewart, Pond Park, and the late John D. Barbour, Esq., of Hilden, were also large contributors to the building fund.

The reading-room is supplied with the leading dailies. There is also a billiard room, gymnasium, and cafe.

To the Editor, "Lisburn Standard."

Sir, -- Referring to the interesting and informative articles by Mr. Dundas in your issue of 2nd and 9th ult., I wish to add a note extracted from the Commonwealth Council Books in the Public Record Office, Dublin, relating to Weeke, the predecessor of Dr. Taylor in Lisburn. Mr. Weeke (or Wyke) had an unsettled time in Co. Down, and in 1659 was in Donaghcloney. In that year the inhabitants of Magheralin petitioned for him to be appointed their minister, he being ready to go because a great part of the said parish consisted of Englishmen, and "ye most part of Donaghcloney (where he now officiates) consists of Papists and Scotts, who are so bound up to their owne judgments that they will not admit of any other."

Mr. Weeke's controversial labours will be the better understood by reference to a detailed account of a discussion with Presbyterians at Antrim Castle given in Adair's "True Narrative," p. 186 et seq.

Adair pronounces him "void of human learning, never educated that way, but a tradesman, and imprudent." Naturally Taylor would not care to act as assistant to an Independent of such a reputation.

(This article was originally published in the Lisburn Standard on 13 June 1919 as part of a series which ran in that paper each week for several years. The text along with other extracts can be found on my website Eddies Extracts.)
Posted by an extract of reflection at Thursday, June 13, 2013