The Annals of Lisburn and Vicinity (pt5) 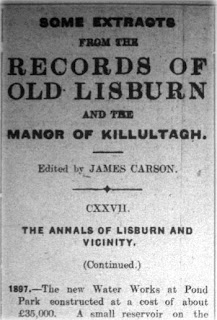 1897. -- The new Water Works at Pond Park constructed at a cost of about £35,000. A small reservoir on the same site, called "Boomer's Reservoir," was made in 1886 as an auxiliary to "Duncan's Reservoir," which was constructed in 1861. The small reservoir in the Wallace Park is of ancient date, and was there considerably over a century ago. The place where it stands was known as "Bason Hill," and the pipes from it supplying some houses in the town were made of wood.

1898. -- The Roman Catholic Church, Chapel Hill, was originally built about the year 1794, and was superseded, on the same site, in 1898 by the present edifice. Previous to 1794 worship was conducted in a building which stood on the south side of Bow Street, immediately opposite the end of Antrim Street. St. Joseph's Hall built in 1889.

1898. -- The County Councils Act came into force. On January 16, 1899 a new election of Commissioners took place under the name of Urban Councillors.

1906. -- A comprehensive and exhaustive history of Lisburn and its institutions compiled by Mr. W. J. Greene in connection with the Largymore School Bazaar.

1911. -- The Coronation Flagstaff erected in the Wallace Park.

1912. -- Sir John E. A. Murray Scott, one time secretary to Sir Richard Wallace, inherited a vast fortune from Lady Wallace. He died in 1912, aged 65 years. It was largely due to his advice and influence that Lady Wallace bequeathed the "Hertford Collection" to the nation. Lady Wallace died in 1897.

1913. -- The Ulster Volunteer Force drilling and preparing to resist, if necessary by force, the imposition of Home Rule on Ulster. Friday night, April 24, 1914, the "Mountjoy" made Larne Harbour, and discharged her cargo of rifles and ammunition. Hundreds of motor cars and motor lorries were in readiness, and these distributed the munitions all over Ulster before breakfast time the next morning.

1913. -- Robert Redman Belshaw died in 1913 at an advanced age. His forbears lived for generations in the Parish of Magheragall. He was a noted book collector, and under his will a valuable collection of books and pamphlets relating to Ireland passed into possession of the Linenhall Library, Belfast. His contributions to the "Lisburn Standard" on local subjects extended over a long series of years, and were interesting and valuable.

1913. -- The Sackville case came before the Courts in London, whereby Lady Sackville, under the will of Sir John Murray Scott, benefited to the extent of some £500,000. This vast sum of money came to Sir John practically, it may be said, from the Hertford estate in Ireland.

1914. -- Technical School, Castle Street, opened. The Lisburn Urban Council procured for this purpose the Castle built by Sir Richard Wallace in 1880. It cost Sir Richard, to build, some £20,000, and was acquired by the Council for £2,000 free of all encumbrances.

1916. -- A considerable portion of the Wallace Park was let to plot holders and cultivated for the production of food.

1916. -- The Ulster Division, on July 1st,. made the ever memorable and glorious charge at Thiepval, when Captain C. C. Craig, M.P., and Major Jenkins were taken prisoners of war and Captain Cecil Ewart killed. The 11th Royal Irish Rifles, composed largely of Lisburn men, bore itself gallantly, and suffered severely on that day.

1918. -- On November 11th the Great European War may be said to have ended. On that day, at eleven o'clock, the armistice was signed, and Great Britain and her Allies emerged triumphant from the titanic struggle, which had extended over period of four years and three months.

(This article was originally published in the Lisburn Standard on 28 March 1919 as part of a series which ran in that paper each week for several years. The text along with other extracts can be found on my website Eddies Extracts.)

Posted by an extract of reflection at Thursday, March 28, 2013