The Annals of Lisburn and Vicinity (pt4) 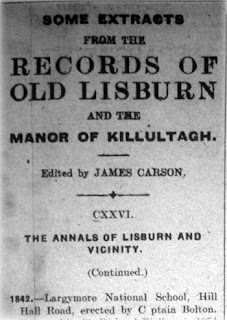 1842. -- The Diocese of Dromore united with Down and Connor.

1849. -- Lambeg Church built on the site of an ancient monastery.

1853. -- The Friends' Meeting House, Railway Street, rebuilt. Prior to that date a meeting house stood on practically the same site, and it is on record that it was there previous to 1707.

1854. -- Lisburn Cricket Club entered into possession of their present ground. In 1884 the four granite boundary stones were placed in position defining its present limits.

1857. -- Brigadier-General John Nicholson was born in the year 1822. His early years were spent in Lisburn, and he always considered it as his home. He obtained a commission in the Bengal Infantry in 1839, and immediately proceeded to India. He was a great and glorious soldier, "the heroic Nicholson," as the men of his own generation loved to call him. He fell leading the assault at Delhi, September 23, 1857, and was buried close to the Kashmir gate. There is a tablet to his memory in the Cathedral, Lisburn.

1859. -- The year of "The Great Revival." Some write of it as "The Year of Grace," others as "The Year of Delusion." It was a year of extraordinary religious excitement, in which Lisburn participated to a remarkable degree.

1861. -- Prior to 1861 Pumps were relied on to meet the water requirements of the inhabitants.

1863. -- Lisburn weavers to the number of 253, including men, women, and children, sailed on board the "Old Hickory" from the port of Belfast for America.

1863. -- Parliamentary contested election between John D. Barbour and Edward Wingfield Verner. Mr. Barbour was returned by a majority of six votes, but was unseated on petition soon after. Mr. Verner was then elected member and represented Lisburn until Sir Richard Wallace entered into possession of the Hertford estate. Sir Richard Wallace was returned unopposed in 1874, and represented the Borough till 1886, when it was absorbed in the South Division of County Antrim. W. G. E. Macartney was elected for South Antrim in 1886, Charles Curtis Craig in 1903. He has represented the constituency since.

1864. -- Railway Street Presbyterian Church opened for worship. Later it was enlarged and a number of necessary alterations made. Through the generosity of Mr. James Crossin, J.P., a valuable organ was installed in 1914. The Lecture Hall was erected in 1889. The Brownlee Memorial Schools, Wallace Avenue opened in 1913. The E.M.B. Memorial Hall, Hilden, erected in 1911.

1867. -- The Island Spinning Company established, the premises having been purchased from J J. Richardson. The original spinning mill was erected in 1840. In 1871 an extensive weaving factory was added, and in 1882, the production of linen thread was introduced. The Island in the River Lagan on which the factory stands, was originally known as Vitriol Island.

1872. -- Action for libel. Walter T. Stannus v. "Northern Whig." The damages were laid by Mr. Stannus at £10,000, and resulted in a verdict for £100. The libel consisted in strictures made by the "Northern Whig", on Mr. Stannus's Management of the Hertford estate.

1875. -- The Methodist Church, Belfast Rd., opened for worship. Previous to that date worship was observed in a building in Market Street. The original church there was built about the year 1774. The Rev. John Wesley officiated frequently in the Market Street building, and addressed immense multitudes in the Linen Hall (which stood on the site) of the Butter and Egg Market. Seymour Street National School was opened in 1886. In 1908 it was superseded by the William Foote Memorial Schools on the same site.

1876. -- The "Lisburn Standard" was first published in 1876 by Wm. Johnston and later carried on by J. E. Reiley, in a house in Castle Street. Victor McMurray took it over in 1913 and removed the plant to Market Square.

1877. -- Bywash covered in. Prior to this date it was an open stream into which the sewerage of the town flowed. It started at Stewarts Mill, crossed Antrim Street, passed along McKeown St., which is now erected on top of new culvert, through the Bank Garden, crossed Bow Street near the Ulster Bank, then into Smithfield, and thence via the Gas Works into the canal. The stream from the Park, which crosses the railway and Bachelors' Walk, joins the Byewash near the Bank Garden.

1877. -- Level crossing over the railway lines at end of Railway Street discontinued, and the Boyne Bridge built.

1878. -- New Cemetery, Dublin Road, opened. Additional land acquired in 1900. The first person interred was Mr. William John Knox, Railway Street, September, 1878, who died when on a visit to Paris at the invitation of Sir Richard Wallace.

1880. -- The Union Bridge over the Lagan, connecting the Counties of Antrim and Down, opened. It replaced an old narrow structure on the same site.

1883. -- William Barbour & Sons, Limited thread manufacturers, incorporated as a limited company. In 1784 John Ban hour, a native of Paisley, erected a small mill at the Plantation. In 1823 he was succeeded by his two sons, John and William. William removed to Hilden and, twelve years later, purchased the original business at the Plantation, and removed the plant to the works at Hilden. William died in 1875, and the management of the now extensive works passed to his sons. In 1898 the firm joined with other Irish, Scotch, and English thread manufacturing firms, forming the Linen Thread Co., Limited.

1884. -- Sir Richard Wallace presented to the town the "Wallace Park," containing 28 acres. Along the side of the railway, in the Park, is the "Dean's Walk," so called from having been planted by Dean Stannus, one time agent to the Marquis of Hertford and Rector of the Cathedral. Sir Richard constructed the main road through the Park, the bandstand, the park rangers' lodges, and the entrance gates and approaches. The pond in the Park was not in the original grant, but was acquired latter from Lady Wallace when the Council took over from her the water rights. Later, in 1899, Sir John Murray Scott presented the "Castle Gardens," adjoining the Cathedral grounds, to the town. They contain the ruins of the old Conway Castle, a beautiful lime-tree walk, a monument to Sir Richard Wallace, and a gun captured at Sebastopol.

1885. -- Thompson Memorial Home opened. A home for aged and incurable people of both sexes. Erected to the memory of William Thompson, M.D., surgeon of the County Antrim Infirmary for almost half a century.

1888. -- Alexander Boyd & Company's premises erected at the corner of Railway Street, opposite the Northern Bank.

1893. -- The water and market rights acquired from Lady Wallace. About 1901 the Courthouse, Assembly Rooms and Town Hall (Estate Office) (were purchased from Sir John Murray Scott. The markets reconstructed and remodelled about the year 1896.

1894. -- From 1894 forward the Wallace estate gradually passed into the hands of the tenants, the holdings being bought by occupiers on favourable terms under the Irish Land Commission. Head rents and ground rents in the town of Lisburn were also disposed of by the office to occupiers' or owners at twenty years' purchase.

(This article was originally published in the Lisburn Standard on 21 March 1919 as part of a series which ran in that paper each week for several years. The text along with other extracts can be found on my website Eddies Extracts.)

Posted by an extract of reflection at Saturday, March 23, 2013