The Annals of Lisburn and Vicinity (pt3) 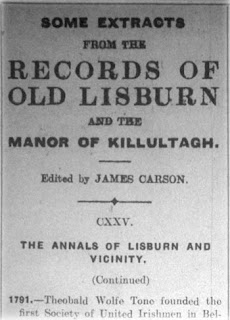 1795. -- The Society of United Irishmen reorganized as a secret society. Formerly its stated object was an honourable one, from this forward its real aim was to overthrow the Government and establish a republic.

1797. -- Four soldiers were executed on Blaris Moor for treasonable practices.

1798. -- In the towns of Belfast, Lisburn, and Carrickfergus the disaffected and United Irishmen were awed into submission by their numerous garrisons, yet several zealous adherents from these towns passed into the country and were actively engaged in the insurgent ranks.

1798. -- The different yeomanry corps on the Hertford Estate amounted to about 1,000 men, two troops of cavalry and nine companies of infantry. Lisburn also in 1780 supplied its quota to the volunteers.

1798. -- Population about 4,000. Cotton spinning, muslin weaving and linen manufacture carried on. The three tanyards in the town were owned respectively by George Whitla, Thomas Beatty, and Clegg and M'Collum. The Lisburn Brewery had much celebrity for its superior ales.

1798. -- Harry Munro was born in Lisburn, May, 1758. When in his fifteenth year, he was taught linen weaving, and later was a buyer of linen webbs. He was a member of the Established Church. In 1796 he became a member of the Society of United Irishmen. He commanded the rebel army at Ballynahinch on June 13th, and after its defeat was captured and executed in the Market Square, Lisburn on June 17, 1798.

Munro was hanged and afterwards beheaded. The scaffold was erected in the Market Square, almost opposite Munro's house, close to the south west corner of the premises now occupied by Messrs. Duncan and Sons. The corner house was then in possession of James Ward, a printer and bookseller, and on the ledge of an upper window of this house part of the scaffolding rested. Three other men were executed in Lisburn about me same time.

1803. -- Heterogenea, or Medley. By John Moore Johnston. This volume, aptly named by its author, "A Medley," embraced within its varied contents a history of Lisburn and district. It was printed in Downpatrick in the year 1803.

1804. -- Robert Owenson's theatrical company gave performances 1803-1804, at a theatre improvised out of a large hayloft in Bow Street, situate in the rere of Mr. Stewart's house, opposite the new road to Hillsborough, Owenson's daughters afterwards became Lady Morgan, and Lady Clarke, and a young actress of the company -- Miss O'Neill -- became Lady Beecher. Lady Morgan was author of the "Wild Irish Girl," and numerous other works of fiction.

1804. -- Wm. Brownlow and Co. opened their bank in Lisburn, but apparently closed it almost immediately afterwards and recommenced business in Lurgan.

1805. -- Hugh M'Call, born in Chapel Hill, Lisburn, 1805, died in the town of his nativity, 1897. Wrote several works of great local interest and was a voluminous contributor to the daily press.

This was added by the second Marquis of Hertford, in 1807. Since then, from its lofty height, the curfew bell has sounded forth nightly at 9 o'clock, 100 strokes, marking the ancient custom and the hour.

1814. -- Lough Neagh completely frozen over and so thick was the ice, that Colonel Heyland went across on horseback from Crumlin, water-foot to Rams Island.

1819. -- A directory and history of Lisburn was published by Thomas Bradshaw.

1823. -- Hilden Thread Mills, established. The work was previously carried on at Plantation from the year 1784.

1824. -- Pigot and Co. published their City of Dublin and Hibernian Directory. It contains a short historical sketch of Lisburn and a directory of the inhabitants.

1826. -- The Belfast Banking Co. established with a capital of £500,000. Now amalgamated with the London City and Midland Bank.

1827. -- Ballinderry church erected at a cost of £2,000. The Marquis of Hertford contributing half the amount.

1832. -- Organ presented to the Cathedral by the Marquis of Hertford.

1834. -- Henry Bayly published a topographical and historical account of Lisburn with a poem on the same.

1835. -- Prior to this year the chief main roads about Lisburn were in existence, viz., the Belfast, Belsize, Antrim, Moira, Ballinderry and Dublin Roads.

1836. -- The Ulster Banking Co. established with a capital of £1,000,000. Now amalgamated with the London County and Westminster Bank.

1836. -- Sir Robert Hart, of Chinese fame, born in Portadown. His father afterwards resided for a time at Hillsborough, and later at Ravarnette.

1839. -- The year of the "Big Wind." Over all Great Britain and Ireland the destruction done was dreadful, and not least in Ulster. In December, 1894, a violent storm raged over the North of Ireland, Hilden and Ravarnette Mill Chimneys were blown down and a house unroofed in Market Square.

1839. -- The section of the Ulster Railway between Belfast and Lisburn opened. The first train started from Belfast at 7 o'clock in the morning. Large crowds assembled to witness the start. At various parts along the line multitudes were collected, and at Lisburn the train was greeted with enthusiastic cheers by a numerous concourse of people.

1839. -- Railway Street was originally known as Jackson's Lane, and it was only after the Railway reached Lisburn in 1839, that it gradually came to be known by its present name.

1841. -- Lisburn Union Workhouse opened for the reception of paupers. Closed as a workhouse in 1918, and the inmates transferred to Lurgan Union.

1842. -- Christ Church, or as it was frequent called, the New Church, was erected in 1842, and later considerably enlarged and improved. Adjoining the Church grounds are the Nicholson Memorial Schools, built in 1864, by Mrs. Nicholson in memory of her children, one of whom was the illustrious General John Nicholson of Indian fame.

(This article was originally published in the Lisburn Standard on 14 March 1919 as part of a series which ran in that paper each week for several years. The text along with other extracts can be found on my website Eddies Extracts.)

Posted by an extract of reflection at Thursday, March 14, 2013