The Making of the Ulsterman (pt5) 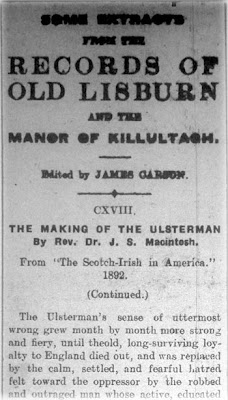 The Ulsterman's sense of uttermost wrong grew month by month more strong and fiery, until the old, long-surviving loyalty to England died out, and was replaced by the calm, settled, and fearful hatred felt toward the oppressor by the robbed and outraged man whose active, educated conscience told him that he had "his quarrel just."

When his righteous anger was, in the opening years of the eighteenth century reaching its whitest heat, Holland began to call upon him, but more movingly still the stirring American colonies. The transplanted Scot is now ready to become afresh a colonist as the transplanted Scotch-Irishman. What a changed man is he, however. Before, he leaves the shores of Antrim, and the hills of Down, and the shadow of Derry walls, for the Forks of the Delaware, the woods of the Susquehanna, and the hills and dales of Virginia and Tennessee, let us plant him over against the Lowlander that still was the untransplanted Scot.

How like, yet how much unlike! How like; in both Lowlander and Ulsterman is the same strong racial pride, the same hauteur and self-assertion, the same self-reliance, the same close mouth, and the same firm will -- "the stiff heart for the steek brae." They are both of the very Scotch, Scotch. To this very hour, in the remoter and more unchanged parts of Antrim and Down, the country-folks will tell you: "We're no Eerish, bOt Scoatch." All their folk-lore, all their tales, their traditions, their songs, their poetry, their heroes and heroines, and their homespeech, is of the oldest Lowland types and times.

Than the Transplanted Scot --

The Ulsterman has larger versatility. He is more plastic. He adapts himself more quickly to strange places and folks. There is in him more "come and go." The Scot is dour; he is sturdy. He has gained through his exportation and his enforced fight for existence in an alien mass strangely large powers of self-adaptation. He is more thoroughly and speedily responsive to outside influences; the environment tells more rapidly, and completely on him. In a few years the Ulsterman will become the Londoner, New Yorker, or Philadelphian; but the Lowlander is Scot often for life.

The Ulsterman is less insular; he is less the man of a land -- he is the man of a nation; he is less traditional, less provincial; he is not an islander, but an imperialist -- not Scotch nor Irish, but rather British; he is cosmopolitan rather than countrified.

He is more human, less clannish: more genial, less reserved; more accessible, less suspicious of strangers; more neighbourly, less recluse. He has more "manners" than his Scotch cousin, though he makes no pretensions to the polish and suavity and fascination of his Celtic neighbour, whom the dogged Northern thinks "too sweet to be wholesome." He has more fun than the Lowlander, but he dislikes the frolics of the Celt. While the Scot is stern, he is sedate; while the Irishman is poetical, he is practical. The Scot is plain; the Celt is pleasing; the Ulsterman is piquant.

He is more fertile in resource; his colonist life taught him to be ready for any thing; he is handy at many things; he is the typical borderer, pioneer, and scout. He will pass easily from one work or trade or business to another; to-day farmer, to-morrow shop-keeper, and third day something else. But with all his readiness to change, he is ever firm, "locked and bolted to results," with a singularly large gift and power for organization and association.

He is more the man of common sense than a metaphysical subtlety, practical rather than severely logical; he studies use rather than reasons, faces common things more than philosophies, deals with business more than books.

He is democratic rather than monarchical, loyal to principal rather than to persons, attached to institutions rather than families or houses; he sees through the Stuarts quickly, and follows the new house of Orange because it will serve him in his political struggle.

His pugnacity is defensive rather than offensive; his heraldic device is rather "the closed gates" of the threatened town than the old Scot's "spurs and bared blade."

And as he was found at Derry, Enniskillen and the Boyne, and as he is to be found still in the broad lands of Ulster, so to-day and forever when his country, wherever that may be, calls, he will be found, the first to start and the last to quit.

(This article was originally published in the Lisburn Standard on 17 January 1919 as part of a series which ran in that paper each week for several years. The text along with other extracts can be found on my website Eddies Extracts.)

Posted by an extract of reflection at Thursday, January 17, 2013