The Linen Industry in Ulster 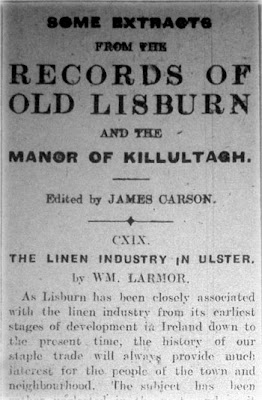 
THE LINEN INDUSTRY
IN ULSTER.


As Lisburn has been closely associated with the linen industry from its earliest stages of development in Ireland down to the present time, the history of our staple trade will always provide much interest for the people of the town and neighbourhood. The subject has been rather neglected in the past, and as it affords great scope for research work, it is to be hoped that at some future time an historian worthy of the task will trace with unerring hand the history of the growth and development of the industry in Ireland.

In order to show intelligibly the importance of the part played in this locality during the development of the industry under the domestic system it will be necessary to make a short survey of its history in general in Ireland.

First of all one must examine briefly the commercial policy of England, and the commercial relations existing between England and Ireland during the early stages of the industry. Next, it will be necessary to trace its growth and development under the domestic system, and which have substituted instead the factory system of manufacture.

It is not known when linen was first manufactured in Ireland, but it is assumed that linen making was practised from the earliest times. It is known to have existed during the thirteenth century, and in the fifteenth linen cloth was exported to England and to Antwerp. In the sixteenth century there are more evidences of the industry, but it was during the seventeenth century that the manufacture of linen first came into prominence.

At that time England was under the sway of the Mercantalist Policy. Under the Mercantile system, in order to have a stock of gold and silver in the country, the immediate object aimed at was to have a favourable balance of trade. To accomplish this and every encouragement was given to the importation of raw materials, but the purchase of foreign manufactures was for the most part prohibited. Unfortunately, this policy was extended to the colonies, and the Mercantalist attitude of mind towards them was that they were to be treated as sources of raw materials which must be manufactured in England and then resold to the colonies. They were not allowed to compete in foreign markets against the mother country and any industries that showed signs of developing were suppressed. It was intended that the colonies should remain in this condition, and that England should reap all the benefits in return for their defence, etc.

Unfortunately the policy towards Ireland was the same as the colonial policy. In the 17th century at the time of the plantation the natives were regarded in the same way as the Indian natives were regarded, and the idea was to plant colonies and civilize the Irish. Ireland was not allowed to develop and compete with English industries. A series of navigation acts were passed which were aimed primarily against the Dutch, who a- that time were a great carrying power. The principal act passed, in the year 1651 stated that "no goods of the growth or manufacture of Asia, Africa, or America were to be imported into England, Ireland or the Plantations, except in ships belonging to English subjects, and manned by an English captain and by a crew, three-fourths of whom were English; while no goods of any country in Europe were to be imported except in English ships, or ships belonging to the country from which the goods came." This measure was ultimately successful in excluding the Dutch from the carrying trade, but rather unfortunately for Ireland it crippled her shipping, and was hurtful to the linen industry, as we shall see later.

The effect of the English Mercantile Policy on Irish industries will now be noticed, and will see why the linen industry was partially encouraged whilst other industries were crushed.

After the Restoration in 1660 Irish cattle farmers, breeding live stock and shipping them to England to be fattened, for a short time carried on a thriving trade. Soon afterwards English breeders raised a great outcry against the increasing importation of Irish cattle. As England was governed at this period by the land owning classes whose interests were bound up with English farmers, the Cattle Act of 1663 was passed prohibiting the import of Irish cattle. The Irish farmers then turned their attention to sheep farming. Large tracts of land were turned into sheep walks, with the result that wool became very plentiful. The manufacture of woollen goods then became considerable, as the raw material was so cheap, and as the cost of living was so much below that of England wages were low. English clothiers began to feel the competition, so a great outcry was raised against the importation of woollen goods into England, which was said to he ruining their trade. The argument was that as the cost of manufacture was much cheaper in Ireland countervailing duties should be placed on Irish cloth to equalise the prices. As a result of the agitation, and in accordance with the English policy then existing, the famous Act of 1699 was passed placing import duties on Irish cloth, but they were fixed so high as to make the Irish trade impossible; and the result was the ruin of the Irish woollen industry.

This restriction had a most important bearing on the Irish linen industry. It was realised by the English statesmen that in crushing the woollen industry an injustice was being done to the Irish, and that if the manufacture of linen could be encouraged it would in some measure recompense the Irish, and at the same time serve the interest of both countries, for at this time England was importing linen goods from the Low countries and the idea was that the Irish linens would take their place. Accordingly, in 1698 we find that when the English Parliament petitioned William III for the suppression of the Irish woollen trade, his reply contained the following:-- "I will do all that in me lies to discourage the woollen manufacture of Ireland, and to encourage the linen manufacture there."

This clearly marks a very important period in the history of the linen industry, and we shall now consider its effect under the domestic system of manufacture.

Earlier in the century Chief-Governor Stafford had tried to promote the manufacture of linen in Ireland. The extent of this trade at that time can be measured from the fact that in a letter to the King he mentions that he has sent to Holland for £100 worth of flax-seed as he considered the soil good for growing flax, that he had brought some skilled workmen from the Low countries, and that he had already established six or seven looms.

After the Restoration under the administration of the Duke of Ormonde, another attempt was made to establish the linen trade. Messengers were sent to see how the Flemish manufacture was carried out. Some progress was made and when Ormonde returned to England in 1669 two flourishing linen manufacturing centres were in existence, one near Dublin and another at Carrick.

The result of these efforts was swept away during the revolutionary war that followed. In 1698 when the country had slightly recovered, the amount of manufactured linen for export was practically negligible.

The kind of linen manufactured before this period was what is called bandle linen. It was coarse cloth, of narrow width, manufactured without any system of regularity of texture, and only according to the imperfect knowledge and crude ideas of the weaver.

Another very important event happened about this period (1698) which had a very powerful and beneficent influence on the development of linen weaving.

Owing to the revocation of the tolerating Edict of Nantes, a number of Protestant linen weavers fled from France and established themselves, some at Waterford, and some, who preferred to live with their co-religionists, at Lisburn. Amongst those who established themselves in our town was the famous Louis Crommelin. It appears that he came at the invitation of William III, to superintend the linen manufacture.

Crommelin's family had carried on the industry in France for more than four hundred years, and he himself had been head of an extensive linen manufacture in Picardy. The King had appointed him "Overseer of the Royal Linen Manufactory of Ireland," and granted him a patent. He was also given £800 a year for ten years as interest on £10,000 advanced by him for starting the business, an annuity of £200 for life, and also £120 a year for his assistants who were to help him to Superintend the cultivation of flax, and instruct in the latest methods of bleaching. Crommelin on his side agreed to advance sums of money without interest to workmen and their families coming from abroad to enable them to embark on the industry, and also to local workmen destitute of means and anxious to work at the trade. Once Crommelin had started his linen industry at Lisburn he invited over Protestant artisans from France and the Low countries. As a result, a great settlement of weavers was made in Lisburn. Although it had been burnt in the civil wins, the establishment of Crommelin and the other Huguenot refugees soon made Lisburn one of the most flourishing towns in Ireland.

Crommelin faithfully carried out his part of the bargain and did marvels to improve the industry. Under his direction a thousand looms and spinning wheels were imported from Holland, and he gave a premium of £5 on every loom at work. He introduced improvements of his own and was the means of finer linen being made in our neighbourhood than had ever been made in the King's dominions.

(This article was originally published in the Lisburn Standard on 24 January 1919 as part of a series which ran in that paper each week for several years. The text along with other extracts can be found on my website Eddies Extracts.)

Posted by an extract of reflection at Thursday, January 24, 2013